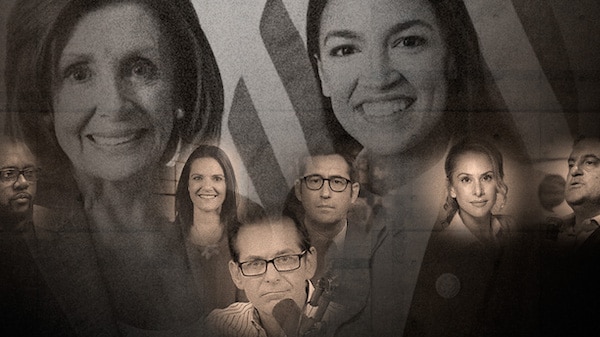 Over the past week comedian Jimmy Dore has single-handedly exposed a collection of self-styled leaders of progressive media as imperialist hacks joined at the hip with the Democratic Party and NATO.

It all started when Dore, a self-described jagoff pothead comedian–called for progressive members of Congress to withhold their votes for Nancy Pelosi as House Speaker until she agreed to hold a floor vote on Medicare for All. With a pandemic raging and Americans losing their jobs and healthcare, it seemed like the perfect way to hold Democrats’ feet to the fire.

But Dore’s push apparently threatened the most prominent progressive in Congress, Alexandria Ocasio-Cortez.

After she rejected his tactic in a series of tweets, deferring to the House Speaker she’s referred to lovingly as “Mama Bear,” a group of prominent podcasters sprang to her defense–and then launched a wave of personalized, vicious, and ultimately revealing attacks on Dore.

Rather than debate the merits of his proposal, figures like Nomiki Konst, Ana Kasparian, Ben Dixon, and Cenk Uygur homed in on Dore’s personality, doing all they could to deflect from the substance of the issue, and insulating their hero AOC.

The Youtube channel of longtime MSNBC contributor Sam Seder became a theater for the meltdown over Jimmy Dore’s rogue campaign for a M4A floor vote.

In the past week alone, Seder has done two lengthy segments devoted to smearing Jimmy Dore.

During one 23 minute segment, podcaster and failed New York public advocate candidate Nomiki Konst launched a McCarthyite attack on Dore, accusing him of taking what she called “Assad money.”

This is a clickbait game. There are hosts on air who want to make change. I think all of us are really concerned about educating our audience and bringing on informed people to help us understand everything, issues, and how to move through, and push for these changes. And then there are those who want to be multi-millionaires and famous. And you know, let’s just make those lines very clear. And not to mention, he has taken money, admitted to taking money, from pro-Assadist groups. So he’s not the pure guy that he wants to pretend… This is the guy who took Assad money!

This was not just a neocon-style distraction, but a total lie. What Konst called Assad money had no relation to Assad. She was referring to a $2,500 donation from a U.S.-based anti-war nonprofit called the Association for Investment in Popular Action Committees. It does relief work in Cuba, Palestine, and Syria, targets of Washington’s ruthless hybrid warfare. This non-profit has also organized openly against the devastating U.S. proxy war on Syria.

The Assad money trope Konst deployed originated from a bogus investigation published by a notorious disinformation shop called Bellingcat. This outlet has been funded by the UK Foreign Office and the National Endowment for Democracy, a CIA cutout created under the Reagan administration.

An ex-CIA agent gushed about Bellingcat’s role as a clearinghouse for U.S. and UK intelligence, declaring,

We love this… instead of trying to have things cleared or worry about classification issues, you could just reference their work.

In other words, Konst smeared Jimmy Dore with a phony talking point that originated from a de facto CIA cutout. Very progressive.

Konst also lashed out at journalist Max Blumenthal by falsely accusing him of going on a literal foreign interest-funded trip to Syria.

So who is Nomiki Konst, and why does she sound like an intern for the Project for a New American Century?

According to her own bio, she not only helps coach Hollywood celebrity wannabe’s on public speaking, but she has also been an active participant in NATO’s criminal destruction of Libya.

That’s right, self-described leftist Nomiki Konst spent time training the Islamist opposition in Libya after the NATO intervention that deposed Moammar Gaddafi and saw him murdered in the streets by jihadist proxies after NATO drones attacked his motorcade. Konst traveled to Libya thanks to the National Democratic Institute, one of the subsidiaries of the very same CIA cutout, the National Endowment for Democracy, that funds Bellingcat.

The National Democratic Institute was directed at the time by Madeleine Albright, the militaristic former Secretary of State who famously stated that she was perfectly fine with being responsible for killing half a million Iraqi children.

When I called out Konst’s U.S. government-sponsored regime change vacation on Twitter, she doubled down on her slander, demanding to know if I had also lined my pockets with Bashar Bucks.

Full disclosure: I have never received money from Bashar al-Assad, the Syrian government, or any of its functionaries. And I don’t actually know how getting Syrian government money would even be possible given the U.S. sanctions that make such an act a criminal offense. But I did receive the same award that Jimmy Dore and many other anti-war journalists have received from the non-profit group she referenced–and which, once again, is not part of the Syrian government in any way!

And guess what? I’m proud to have earned an award approved by the family of Serena Shim, the brave American journalist who lost her life exposing the dirty war on Syria.

Beyond her part in bringing slavery back to the African continent, Nomiki Konst was trained as a “millennial thought leader” by the Truman National Security Project, a Democratic party-aligned, pro-war think tank that helped groom noted revolutionary leaders like Pete Buttigieg and Michele Flournoy.

The Truman National Security Project was formed to create a “new generation of hawkish Democrats rethinking security questions in a post-9/11 world.” Nomiki seems to fit perfectly with the brand.

When it comes to NATO, all I witnessed was Libyans being incredibly grateful to NATO because it was so targeted. You’d go by these buildings where NATO struck the buildings and they just imploded, it was amazing.

Even in 2015, long after the liberal hawks who pushed Obama to strike Libya had been wholly discredited and the country was in perpetual chaos, Konst stood by her support for the attack, tweeting that the neocon senator Marco Rubio was right about Libya.

At the same time, she was regularly appearing on Fox News to shill for Obama’s wars in Syria and Iraq.

Like Nomiki Konst, Young Turks personality Ana Kasparian took it upon herself to defend AOC against the powerful Beltway lobby of pothead comedian Jimmy Dore and his supporters.

She accused him of never acting in good faith and tweeted that his call to pressure Pelosi is more a branding exercise than anything else, even while admitting that Jimmy’s proposal is the right thing to do.

I’d be remiss to overlook the influence of twenty million dollars invested in The Young Turks from Jeffrey Katzenberg’s media conglomerate that has its fingers in the private healthcare industry.

In 2019, Katzenberg developed a smartphone app to help healthcare giants with mobile marketing.

Like Nomiki Konst, Ana Kasparian brands herself as a progressive, and even a socialist, while participating directly in NATO propaganda operations.

Last year, she beamed with pride as she interviewed Madeleine Albright at the Munich Security Conference, a NATO summit funded by Western governments, multi-national corporations, and the arms industry.

At the same gathering of international militarists, she argued to a U.S. general that Trump was not hard enough on Russia and suggested that he’s controlled by Putin, “Don’t you think there are too many coincidences when it comes to Donald Trump and Russia. And look I’m not some Russia fear-mongerer. But he questions the legitimacy of NATO, he questions whether or not it was really that big of a deal for Russia to annex Crimea. He was very reluctant to implement those sanctions, he was very complimentary to Vladimir Putin. It was just his actions that really do speak volumes,” Kasparian insisted.

She also denigrated leftists who dared to question the avalanche of anti-China propaganda, demanding that they “be honest” and just accept State Department talking points, lock stock and barrel, saying,

No surprise, Kasparian had little interest in reporting on the persecution of Julian Assange. When his extradition trial kicked off, her viewers had to pressure her to even cover it at all.

The most consequential trial of the century isn’t even on the radar of the corporate NATO propagandist Ana Kasparian.

Perhaps the most unhinged Jimmy Hater is Ben Dixon, the podcaster who speculated that Dore was actually an FBI operation to destroy the squad and prevent Medicare For All.

Dixon’s tirades against Dore include, among others, this not-so-subtle outburst:

Fuck Jimmy Dore! This stuff is sociopathy. What he is doing is cashing in on your anger. But he’s cashing in on a strategy that’s going to leave you without Medicare For All. He is literally at this point, COINTELPRO for me. He is a fed, at this point.

This is the same Ben Dixon who spent years smearing Julian Assange and providing left wing cover as the actual feds sought to lock the Wikileaks co-founder up and throw away the key as punishment for revealing hideous U.S. war crimes.

Dixon had high praise for the feds and their meddling in Hong Kong. Specifically the CIA

Even if the CIA is funding the protesters in Hong Kong, China is no more the socialist revolutionary vanguard that America is. So you might find ourselves in situations where the CIA, who does nothing but evil things around the world, yes, find themselves, for whatever reason, whatever their justification, find themselves on the right side of the argument. I’m not going to have a knee-jerk reaction and say just because the CIA–it’s just like saying just because America is involved in something it’s inherently evil. No!

Dixon was so incensed by the prospect of a floor vote on public healthcare that he demanded Jimmy Dore meet him on the playground at recess.

Cenk Uygur also trashed Jimmy Dore, his former colleague at The Young Turks. Maybe it was inevitable that Cenk would lash out at Jimmy. For the past four years, Cenk has shamelessly promoted Russiagate, claiming an undeniable Trump-Russia connection and whipping up Cold War hysteria, telling his audience, “I think there clearly is collusion based on the publicly available evidence… I think during the Russians, during the election, did they quote unquote interfere? Yes. Did they do the fake news? Yes. Did they buy those troll farms to do tweets? Yes… But after the election, Putin calls him aside and says “you know we did all that money laundering together. We just turn that in and you’re in a world of trouble. You’re going to go to prison. So here’s what you’re going to do for us. And then Trump proceeds to do just that.”

Back in 2011, the future founder of the Justice Democrats was orgasming over the destruction of Libya, declaring,

And when Neera Tanden, who proposed stealing Libya’s oil to balance the budget, was recently selected as Biden’s office of management and budget director, Uygur tweeted that he’s rooting for her.

And then there’s the time he declared his support for “our guys” in the CIA.

It’s no coincidence that the pundits who are circling the wagons around AOC and seething at a comedian for pushing for a Medicare For All floor vote are also a bunch of pseudo-left imperialists. They’ve positioned themselves as guard dogs and gatekeepers of the Democratic Party, a pro-war, pro-Wall Street political cartel that fights the authentic anti-imperialist left harder than it takes on right-wing Republicans.

If there’s any positive to take away, now we know who’s part of the struggle to improve the lives of working people in this country and ends wars abroad, and who’s standing in the way.