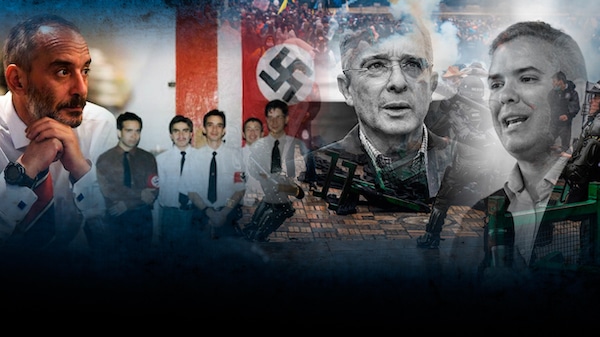 Colombia is on strike. And the police and military are terrorizing the population to crush it.

It kicked on when the far-right president President Ivan Duque announced a wildly unpopular tax reform imposing crushing austerity measures on middle class and poor Colombians. Duque’s proposal aimed to pay off debt in order to project stability and satisfy international investors. But that stability for international capital means more instability for the tens of millions of Colombians struggling to put food on the table.

The country is already in dire economic straits–43 percent of Colombians are in poverty and 15 percent are in extreme poverty–all of this has been exacerbated during the COVID-19 pandemic.

But the tax reform proposal is the trigger for deep discontent.

The injustice for the 6,402 innocent civilians murdered by the military and paramilitaries, then covered up. What’s known as the False Positives scandal.

The Duque government’s attacks on the 2016 peace accord that ended the civil war with the left-wing guerrilla group known as the FARC.

Mishandling of the COVID 19 pandemic. Sheer corruption and impunity.

All of this frustration was just bubbling beneath the surface, and Duque’s austerity proposal boiled the society over.

Facing this unrest, the Colombian government–a supposed democracy–is acting much more like a far-right, even fascistic, dictatorship. That’s not hyperbole. 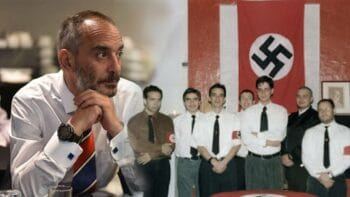 This is the figure that provided the intellectual framework for how Colombian police understand the protests.

In February, he was invited by the Colombian military to give a presentation on how to defeat an uprising. He describes a pseudo-intellectual framework called “Dissipated Molecular Revolution.”

He describes an intercontinental communist conspiracy that has taken place over the last three-plus decades to take over Latin America in a post-modern framework.

It lumps together protesters, disparate social and indigenous movements, armed groups, human rights NGOs, civil society–anyone who dissents from the politics of the state – as part of a subversive conspiracy that the military is wholly unprepared for. 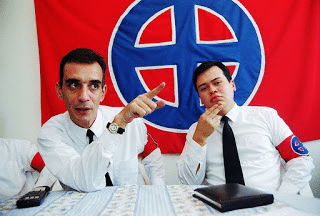 While this might sound like a crackpot conspiracy theory to the average viewer, it resonated with the most powerful figure in Colombia: former president Alvaro Uribe.

Uribe is the mastermind behind the bloodbath in Colombia. He’s widely known to be a puppet master of the current president, Iván Duque, the figure giving the orders to beat and kill protesters.

Here a cop chases down a protester and shoots him point-blank.

After a day of initial protests, Uribe sent out a tweet calling on police and soldiers to use their weapons to “defend their integrity.”

Hours later, after a massive online campaign, Twitter deleted his tweet because it was clear incitement to violence.

But it was too late. Colombian forces clearly understood Uribe’s tweet as a green light, a license to kill. And that’s exactly what they did. Police massacred 7 people in the city of Cali, a hotbed of protests.

Graphic footage: Colombian police just murdered at least 5 people in the city of Cali, a center of protests against @IvanDuque’s tax increase. Other sources say 7 were killed. More blood on the hands of the US-backed narco-regime. pic.twitter.com/FR21bqLJXD

Here’s a Colombian riot cop shooting a protester at point blank range. I wonder if he survived. pic.twitter.com/rraCSI2oKm

The Colombian government militarizes the city of Cúcuta in what appears to be preparation for a war against unarmed mobilizations. pic.twitter.com/7sciES8ifM

Here’s a Colombian riot cop shooting a protester at point blank range. I wonder if he survived. pic.twitter.com/rraCSI2oKm

The US gave that helicopter to Colombia ostensibly to "combat drug trafficking." Meanwhile, drug cartels control the country and the helicopter is used to repress popular protests.pic.twitter.com/mA7GsFBFgA

Duque, Uribe and the narco-state

The U.S. gave these helicopters, free of charge, to Colombia as part of what’s known as Plan Colombia–a massive military aid package that was ostensibly about fighting drug traffickers, but was really about defeating the leftist FARC counterinsurgency and punishing their base of support among peasants in rural areas.

In 2016, the FARC and government made a peace deal, so aside from a few holdouts, the FARC doesn’t exist.

Meanwhile, there’s more cocaine coming out of Colombia than ever, and the international drug cartels are more powerful than ever.

They control nearly every aspect of the state, police, and military. How do we know this?

This was ordered by Alvaro Uribe. And the legal system has never brought charges against Duque for this because it’s under his and Uribe’s control.

Ñeñe was close with top figures from the military and police too. The same state forces that are supposed to be battling drug cartels. This is publicly available information, so the U.S. government knows it, even if the corporate-owned media ignores it.

Colombia is a narco-state posing as a democracy. But with the ultra-violent crackdown on the protests, it’s shedding the “democratic” facade.

After four days of mass mobilizations all over the country, Duque announced the withdrawal of the proposal but said another one would be announced in the coming days, a clear attempt to placate the protesters that failed.

Hours after the announcement, Duque declared he is sending the military to the streets.

“Our military forces, trained to act in urban settings, are supporting the work of the national police,” he declared.

At Duque’s side was the army commander Enrique Zapateiro, a hardline who has been involved in the murder and cover-up of innocent civilians, known to be among the most extreme right-wing elements of the military and an instrument of Uribe.

“A friend of mine who is a psychiatrist and had to interview Zapateiro once told me he is psychotic, he has mental issues,” commented journalist Abeldaro Gomez Molina.

And truth be told you can see some imbalances in his way of thinking which is troubling because he is an instrment of Uribe, so we can only expect the worst from him.

In the city of Cali–where protests have been the biggest–police shot a young protester named Nicolas Guerrero in the head. A popular Colombian DJ was live streaming from the protest so some 70,000 people watched Guerrero bleed to death. That DJ said his phone, Instagram, and Facebook accounts had been hacked, and his friends and family are receiving strange calls asking for his location, forcing him to flee Cali.

As protesters were being massacred In the city of Pereira, another center of protests, the mayor Carlos Maya called on private security to collaborate with the military and police.

“We will call on all business groups and private security forces to create a united front with the police and military to reestablish order and citizens’ security,” Maya announced.

This is an implicit call for paramilitaries to take to the streets explains Lina Maria Montilla Diaz, an official in the Central Union of Workers. “We have the problem of paramilitarism and with these types of declarations they are inviting these paramilitary groups to start working and strengthening their ranks,” she told me.

Dead chickens were left outside the headquarters of the left-wing Alternative Democratic Pole party – an unmistakable death threat.

Just days after the mayor of Periera’s call for private security to take control of the city, plain-clothed gunmen pulled up in a car and opened fire on Lucas Villa, a university student and yoga teacher.

Lucas Villa has been a highly visible figure in the protests and was apparently targeted for his activism.

“It’s a tax deficit taken from the rich people, the middle class, and the poor. Now we are going to have to pay more for water, internet, coffee, and phone service because we’ve been naive,” he explained to a group of people on a public bus.

At the time of this recording, 34 people have been reported killed. But that’s certainly way below the actual number. According to Colombian journalist Laura Sofia Mejia, the government is covering the real number up.

“Something important is that we contacted one of the institutions trying to get information on how many were killed on a certain night and we were told off the record by an official that the order is not to reveal any information to the press,” she said.

Throughout the strike, the Duque government has insisted that it’s allowing peaceful protest and that the militarization is necessary to battle vandals and terrorists. Generating fear and portraying its heavy hand as the answer seems to be the government’s only chance at subduing the strike. While it was clear that the “vandals and terrorists” narrative was a lie from the start, it all came crashing down on Thursday when a group of men in civilian clothes got out of a vehicle in Cali and opened fire on a demonstration.

Other demonstrators nearby managed to search the vehicle and found police gear inside.

Caught red-handed, the police were forced to admit the vehicle belonged to them.

With their scare tactics failing, Duque and Uribe’s murderous iron fist failing to break the strike, there’s no telling where this goes. Anything could happen.