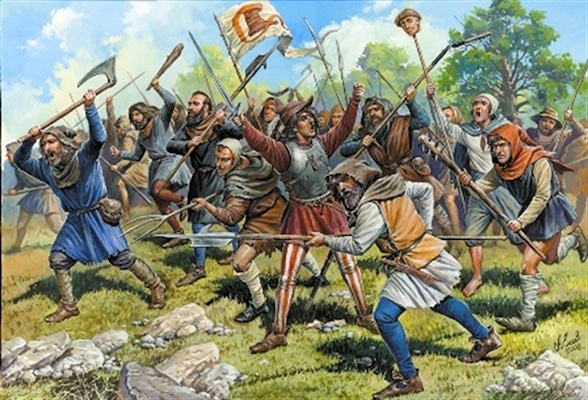 At a time when peasant masses in the country are engaged in a valiant struggle for the repeal of the Central government’s three infamous laws, and have laid peaceful siege to Delhi, braving rains and bitter cold, it is worth recalling Friedrich Engels’ study of the peasant war in Germany in 1525, that also celebrated its outstanding leader Thomas Muenzer. Such a recall becomes necessary for another reason.

There is an impression among many that while the idea of a worker-peasant alliance was advanced by Lenin and taken up subsequently by Mao and other third world Communist revolutionaries, both Marx and Engels had been sceptical about the potential role of the peasants as an ally of the proletariat in the transition to socialism. The selective quotation of stray remarks of Marx, torn out of context, has also contributed towards a confirmation of this impression.

The anarchists have been particularly severe on Marxism on this score. Bakunin had accused the German Communists of viewing all peasants as elements of reaction and added: “The fact is that the Marxists cannot think otherwise; worshippers of state power at any price, they are bound to curse every people’s revolution, especially a peasant revolution, which is anarchic by its very nature, and which proceeds directly to annihilate the state.”

This impression about Marx and Engels however is entirely erroneous. It was Ferdinand Lassalle the German working class leader who had called the sixteenth century peasant uprising in Germany “reactionary” in “substance and principle”, despite its “revolutionary appearance”. Here, as in other spheres, such as the so-called “Iron Law of Wages” propounded by Lassalle (that wages under capitalism can never rise above a certain physical subsistence level), Lassalle’s views were erroneously identified as those of Marx and Engels. In fact, Engels’ study of the sixteenth century peasant uprising in Germany, was meant precisely to counter this tendency within the German Left, shared even by leaders like Wilhelm Liebknecht, to see the peasants as a reactionary mass with whom the working class could have no alliance.
å
Engels by contrast not only advocated a worker-peasant alliance for the coming German Revolution, but suggested that the 1525 peasant uprising had failed because it had been a series of local events with little national coordination among these events (Germany at that time had not been a single unified country), and also because the peasants had failed to have alliances even at the local level with the plebeian urban masses (who constituted a proto-proletarian class). In fact they were able to put up a much stronger resistance in those regions where they could have an alliance with the plebeian masses such as in Thuringia where Thomas Muenzer had been active.

The Peasant War in Germany had been written in 1850, in the shadow of the defeat of the 1848 revolution all over Europe. In 1870 Engels wrote a Preface to a new edition of the book where he drew a parallel between the 1525 and 1848 revolutions and further elaborated his argument for a worker-peasant alliance.

In the 1870 Preface he suggested that the German bourgeoisie had arrived too late on the scene, at a time when bourgeois development elsewhere in Europe had simultaneously developed the proletariat to such a great extent that the bourgeoisie even in those countries was politically on the retreat, having to buttress its position by building bridges with other conservative, anti-working class elements; in France for instance the bourgeoisie even had to accept the rule of Louise Bonaparte. In Germany where the bourgeoisie had not even made any “advance” towards political power for it to make a “retreat”, it had to have an alliance with the feudal lords from the very outset, to forge a united front for the defence of private property, both bourgeois and feudal property.

In this process the bourgeoisie necessarily betrayed the interests of the peasantry which could be served only by the proletariat coming to power, by forming a worker-peasant alliance. Such an alliance could be forged and would actually enable the proletariat to come to power because of the  combined numerical strength of the allies. A worker-peasant alliance was thus historically both necessary and also possible, for taking on the bourgeois-landlord alliance.

Engels listed out which segments of the population, in the concrete conditions of late nineteenth century Germany, could constitute allies of the proletariat. These were: the petty bourgeoisie, the low grade proletariat of the cities, the small peasants, and the wage-workers of the land. Within the rural population, this list includes only two classes: the small peasants (Engels uses the terms large, middle and small, rather than rich, middle and poor, to describe the various peasant peasant classes), and the agricultural labourers (or what he calls wage workers on the land). He explains his argument as follows:

“The small peasants (bigger peasants belong to the bourgeoisie) are not homogeneous. They are either in serfdom bound to their lords and masters, and inasmuch as the bourgeoisie has failed to do its duty in freeing those people from serfdom, it will not be difficult to convince them that salvation, for them, can be expected only from the working class; or they are tenants, whose situation is almost equal to that of the Irish. Rents are so high that even in times of normal crops the peasant and his family can hardly eke out a bare existence; when the crops are bad, he virtually starves. When he is unable to pay his rent, he is entirely at the mercy of the landlord. The bourgeoisie thinks of relief only under compulsion. Where, then, should the tenants look for relief outside of the workers?

“There is another group of peasants, those who own a small piece of land. In most cases they are so burdened with mortgages that their dependence upon the usurer is equal to the dependence of the tenant upon the landlord. What they earn is practically a meager wage, which, since good and bad crops alternate, is highly uncertain. These people cannot have the least hope of getting anything out of the bourgeoisie, because it is the bourgeoisie, the capitalist usurers, that squeeze the life-blood out of them. Still, the peasants cling to their property, though in reality it does not belong to them, but to the usurers. It will be necessary to make it clear to these people that only when a government of the people will have transformed all mortgages into a debt to the State, and thereby lowered the rent, will they be able to free themselves from the usurer. This, however, can be accomplished only by the working class.

“Wherever middle and large land ownership prevails, the wage-workers of the land form the most numerous class. This is the case throughout the entire north and east of Germany, and it is here that the industrial workers of the city find their most numerous and natural allies. In the same way as the capitalist is opposed to the industrial worker, the large landowner or large tenant is opposed to the wage-workers of the land. The measures that help the one must also help the other. The industrial workers can free themselves only by turning the capital of the bourgeoisie, that is, the raw materials, machines and tools, the foodstuffs necessary for production, into social property, their own property, to be used by them in common. Similarly, the wage-workers of the land can be freed from their hideous misery only when the main object of their work, the land itself, will be withdrawn from the private property of the large peasants and still larger feudal masters, and transformed into social property to be cultivated by an association of land workers on common basis”

Engels is visualizing not a two-stage but a one-stage revolution, a socialist revolution, which means that from the morrow of the revolution all effort is to be towards the development of socialism rather than any initial build up of capitalism in a period of transition. This is why excludes not only large peasants but even middle peasants from the list of revolutionary allies. He suggests the nationalization of land rather than radical land distribution, following the break-up of feudal estates.

Obviously, the precise composition of the worker-peasant alliance and the precise agenda of this alliance, will vary from country to country depending on concrete conditions. Besides, in today’s context, the peasant question must involve liberation not just from feudal oppression but also from big capital, comprising both domestic corporates and multinational agribusiness. But as Engels and Marx had recognized (the book had appeared initially as articles in the Neue Rheinish Zeitung edited by Marx who obviously shared Engels’ position), an appropriate alliance with the peasantry is an essential condition for the achievement of socialism.åç