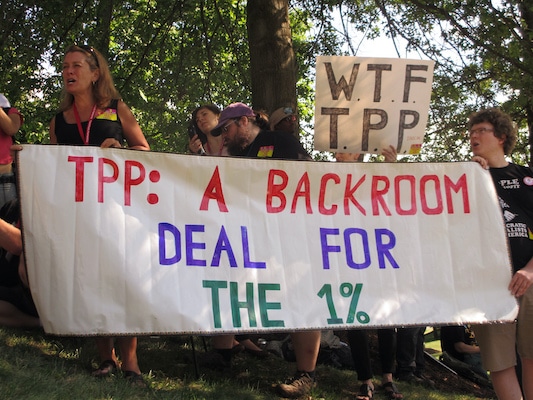 The incoming Biden administration is under tremendous pressure to demonstrate better U.S. economic management. Trade negotiations normally take years to conclude, if at all. Unsurprisingly, lobbyists are already urging the next U.S. administration to quickly embrace and deliver a new version of the Trans-Pacific Partnership (TPP).

Repackaging and reselling a TPP avatar will not be easy. Well before Trump’s election, even the official mid-2016 International Trade Commission’s assessment doubted Peterson Institute of International Economics (PIIE) claims of significant benefits from the TPP for all.

Unsurprisingly, most major U.S. presidential candidates in the 2016 election–even Hillary Clinton, Obama’s Secretary of State, credited with his ‘pivot to Asia’ to isolate China–opposed the TPP.

Trump’s campaigns and presidency have since changed U.S. public sentiment. All too many Americans now blame globalisation and foreign threats–especially immigrants and China–for many major problems the U.S. faces.

Most believe that better jobs have been lost to cheaper production abroad, due to globalisation. Downward social mobility for most Americans in recent decades has actually been due to technological changes, including mechanisation and automation.

Uncomfortable with Trump’s unilateralism despite other affinities, those keenest on checking China–namely the Japanese, Australian and Singapore governments–have kept the TPP flame alive.

They succeeded in getting the ‘TPP11’–minus the USA–to endorse a Comprehensive and Progressive TPP (CPTPP). But even the modest trade growth claims of all pro-TPP reports were premised on U.S. market access.

With the U.S. out, the CPTPP would mainly have bolstered Japanese and other transnational corporations (TNCs) and Singapore as a financial centre. But other governments have stayed on for their own reasons, rather than due to realistic expectations of significant economic gains.

With the TPP favouring foreign investments, investors may even go abroad as there is less advantage in being domestic. Thus, foreign direct investment (FDI) and even portfolio inflows could decline under the TPP avatar, while its onerous provisions undermine the national and public interest.

The CPTPP did not even drop or revise the worse TPP chapters. It only suspended some obviously onerous intellectual property (IP) and other provisions, mainly of interest to U.S. TNCs. These can easily be reincluded as successes by the new administration.

IP and investor-state dispute settlement (ISDS) provisions are supposed to attract much FDI. ISDS has mainly been of interest to U.S. TNCs, but was opposed by the jingoist Trump team for exposing the U.S. to foreign TNC legal claims.

Under ISDS, TNCs can sue governments, e.g., for supposed loss of profits, including future projections, even if due to policy changes in the national or public interest, e.g., for contagion containment.

ISDS claims are typically referred to arbitration tribunals. This extrajudicial system supersedes national laws and judiciaries, with secret rulings not bound by precedent or subject to appeal. Regardless of who wins, these proceedings are very costly for governments, especially those with modest means.

Law firms have recently been urging foreign investors to use ISDS to sue governments for resorting to extraordinary COVID-19 measures. Meanwhile, COVID-19 vaccine companies have included indemnity clauses protecting them from lawsuits by governments and others.

If Trump had been re-elected instead, the ISDS chapter could have been removed to secure U.S. acceptance during his second term. As with the North American Free Trade Area (NAFTA), citing other cosmetic changes, they would have been presented as major gains by him.

Strengthening IP monopolies would increase the value of trade by charging and paying higher prices for medicines, treatments, tests, vaccines as well as other patented and copyrighted products. COVID-19 has highlighted how IP rents impose avoidable costs and stymie progress by discouraging cooperation.

As ‘price-gouging’ is not unlawful in the US, its laws cannot be relied on to protect consumers elsewhere. Unsurprisingly, before the pandemic, Médecins Sans Frontieres warned that the TPP will go down in history as the worst “cause of needless suffering and death” in developing countries.

Having received massive government and other subsidies, pharmaceutical TNCs will profit immensely from the new vaccines, thus limiting access by poor countries and people. By contrast, free vaccinations have ensured effective campaigns against smallpox, polio, tuberculosis and other communicable diseases.

TPP trade gains have been greatly inflated by lobbyists. After all, the U.S. already has free trade agreements (FTAs) with most other TPP countries. Trade barriers with the others were low in most cases, so real gains from further trade liberalisation were meagre, except for Vietnam, due to its U.S. war legacy.

Thus, the TPP mainly promoted more TNC-friendly rules, rather than trade. This is hardly surprising as the 6350-page document was drafted by various working groups, including hundreds of representatives of major U.S. TNCs and other lobbyists.

The COVID-19 pandemic has disrupted supply chains, especially across national borders. Such transborder disruptions were often due to contagion containment measures, but some were deliberate. For example, the U.S. and Japan governments have urged TNCs to end investments in and outsourcing from China.

These policy actions have also hit suppliers, many from Southeast Asia. While some TNCs relocated to other developing countries, the CPTPP has not helped those hurt by such recent economic rivalry and conflict.

Having served as Obama’s loyal Vice-President, Biden is being told that the new administration can easily secure a quick win with a few revisions to the TPP agreement to address earlier criticisms, objections and concerns in the U.S. Thus, the CPTPP is being presented in Washington as a low-hanging fruit, almost ripe for plucking.

The new U.S. administration must realise that corporate neoliberalism’s consequences has been responsible for the rise of finance and the erosion of social protections resulting in the social pathologies which have enabled Trump’s rise.

Corporate globalisation and COVID-19 should also have taught developing countries that they must reject FTAs strengthening IPRs, ISDS and TNCs in order to secure policy space to ‘build back better’.