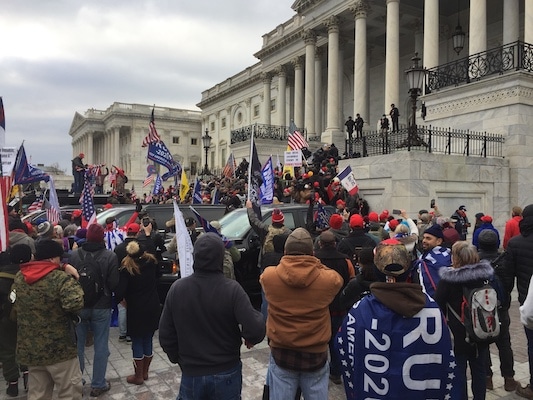 The extensive commentary I have read on the Capitol Seizure of January 6 has not, to my knowledge, focused on two aspects of the event: The first is the class composition of the rioters.(1) The second is the actual cost of the event. The first is important even as an academic matter: Was the Seizure a “bourgeois riot,” as in Florida 2000? If not, what was it? The second is important as a check on the agency of the rioters; did they require a hidden, massive source of funding? Or could they have been, in the main, self-financed? Let us examine each topic in turn.

The Class Composition of the Rioters

Most discussion of the rioters has proceeded via generalization from anecdote, with this or that colorful and “terrifying” character taken in synecdoche for the whole. I decided to take a different approach, and aggregate as much hard data about the rioters as I could: Matters such as their home states, their ages, and their occupations (these not being ascriptive identities). To that end I read and tabulated as much data from news stories about the rioters as I could.(2) Our Federal system makes it hard to track how many rioters have been arrested and charged, and the ultimate numbers will keep rising for some time. As of this writing, around 125 rioters have been charged; the total is expected to be in the hundreds. (Estimates of rioters inside the capital by the rioters themselves range from 700 to thousands.) So, with 107 rioters tabulated (see the complete table in Appendix I) I think I have a reasonably good representation of the rioters arrested as of this writing. Whether arrested rioters are a good proxy for all the rioters is a question I don’t know how to answer (since the act of being in the Capitol was itself a crime; it wasn’t necessary to commit a more overt act to be a criminal.)

As far as ascriptive identities go, we can generalize that most of the rioters were white; and most were male. It follows that they were not demographically representative of the working class as a whole, which is multi-racial and mixed gender. It’s difficult to aggregate more precise data about them, because that depends on the quality of the reporting; hence, although we have tabulated 107 rioters, we have home state data for 50/107 (46%), age for 52/107 (49%), and occupation 49/107 (45%). So now let’s look at the data we have.

The conclusion we can draw from Table 1 is that the Capitol Seizure was a national event. The Big States are all well-represented. (In other words, people didn’t go to the Trump rally on January 6 because it was only an hour’s drive away. New York and California outweigh Virginia and Pennsylvania, for example.)

The conclusion we can draw from Table 2 is that Capitol Seizure rioters were “pretty evenly” distributed (I don’t speak statistician; perhaps we have one in house?) Not all youngsters; not all retirees; not all “prime of life.”

The conclusion we can draw from Table 3… Well, I gotta say, the top three occupations being “owner,” “cop,” and “real estate broker” screams “petite bourgeois ie” to me. Granted, the owners are mostly owners of small firms, like florists or fishing charter operators, but firms they are. (The cops are not the Capitol hill cops, but cops who came from elsewhere.) It’s also extremely suggestive that there are no credentialed members of the PMC present at all; only one lawyer, no accountants, no psychiatrists; the closest we come is an occupational therapist. There are also no labor aristocrats, save one union VP. The working class rioters are flexible in their arrangements; no Amazon workers, but a contractor, a programmer, an arborist/chimney sweeper, etc. This flexibility shades over into the lumpenproletariat: “Supplier” is my polite coinage for dealer.

Blue-skying fiercely, here: If we wanted to construct a narrative that the Capitol Seizure–and the reaction to it–was a civil war between the classical petite bourgeoisie, being squeezed both by the corporate behemoths and Covid, and the arriviste PMC, newly come to class consciousness in the Trumpian cauldron, that wouldn’t be so hard to do, would it? “Two houses both alike in dignity….” Based on the very partial data we have. With the bourgeoisie doing what it can, as usual, and the working class doing what it must, also as usual.

The Cost of Staging the Event

I tried to work through the cost of staging the entire event–the earlier rally, not just the riot–in the following figure (which is very crude, being based entirely on national averages). Nevertheless, I think I’m in the ballpark. The central assumptions are a crowd of 10,000, 80% of whom came by chartered bus (there are numerous anecdotes of buses being organized by local entrepreners).

There’s much, much more that I’d like to write about the Capitol Seizure (perhaps with even better data). I would enjoy finding out why so many rioters thought taking videos and selfies of themselves in the Capitol and putting them up on Parler or Facebook was a good idea. I would enjoy going back through the links in my table and aggregate what rioters actually said (as opposed to whatever was projected onto them by PMC influencers). Especially I’d enjoy looking at the tactics that the rioters employed; after all, if their goal was to “send them a message” the operation was a brilliant success. And I would also like to look at the PMC reaction, with its strong flavor of extra-legal punishment.

I hope this was helpful. Again, comments from statisticians would be especially helpful.

All names are in the public domain.

Q: Was the rioter reported to be a QAnon fan?

Transport: Car, air, or bus? I am guessing that bus was not mentioned because it was unremarkable.

Selfie/Stream: Almost certainly under-reported, given the volume on Parler and Facebook.