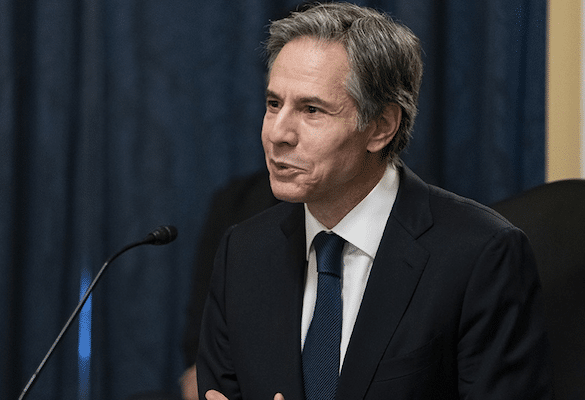 INCOMING U.S. Secretary of State Antony Blinken has said that the country’s Israeli embassy will remain in Jerusalem and that Donald Trump was right to agitate against China.

President Joe Biden’s top diplomat told lawmakers during his Senate confirmation on Tuesday that Mr Trump “was right in taking a tougher approach to China”–specifically in identifying the Chinese government’s treatment of Uighur Muslims as a “genocide.”

On the issue of the Israeli embassy, Mr Blinken was asked by hawkish Republic Senator Ted Cruz:

Do you agree that Jerusalem is the capital of Israel and do you commit that the United States will keep our embassy in Jerusalem?

The new secretary of state served as a senior foreign policy official in the Obama administration–a period marked by increased global conflict and wars in the Middle East.

During Barack Obama’s tenure, the U.S. funded jihadist groups in Syria under the CIA’s Timber Sycamore program which was ended by Mr Trump in 2017.

Mr Blinken was grilled by Republican Senator Rand Paul over his history of pushing regime change in the Middle East and North Africa, his role in the disastrous Nato intervention in Libya, and his support for the invasion of Iraq in 2003.

Mr Blinken was also pulled up over the $250 million (£183m) spent by the Obama administration on training just 60 anti-Isis rebels in Syria.

He denounced the previous administration’s move to list Yemen’s Houthis as a terror group, saying it makes it “even more difficult than it already is to provide humanitarian assistance to people who desperately need it.” He did, however, rebuke the movement for overthrowing the government of president Abed Rabbo Mansour Hadi in 2015.

He has also previously said that the U.S. should support Turkey in its fight against the Kurdistan Workers Party.

Also at the Senate hearing, Mr Blinken confirmed that the Biden administration would continue to recognise Juan Guaido as Venezuelan president and would seek to “more effectively target” sanctions on the democratically elected government of Nicolas Maduro.