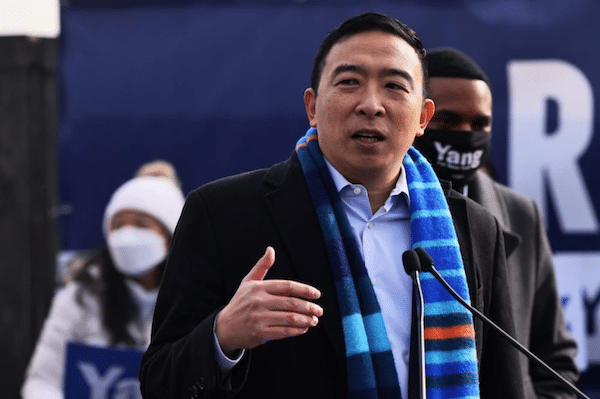 Writing for Forward, a Jewish American webzine, Yang, who is a New York City mayoral candidate, compared BDS “to fascist boycotts of Jewish businesses” in the past, seemingly a nod at Nazi policies of the 1930s and 40s.

“A Yang administration will push back against the BDS movement, which singles out Israel for unfair economic punishment,” Yang wrote.

“Not only is BDS rooted in antisemitic thought and history, hearkening back to fascist boycotts of Jewish businesses, it’s also a direct shot at New York City’s economy,” he said.

Inspired by the South African movement credited for ending the country’s apartheid in the 1990s, the 15-year-old BDS movement encourages individuals, nations and organisations to boycott Israel over its consistent violations of international law and human rights standards.

It does not target Jewish owned companies, or any company, in the United States or elsewhere that does not have links to Israel, despite Yang’s insinuation that BDS negatively affects New York’s “small businesses”.

‘This take is terrible’

The pushback against Yang’s statement came rapidly among progressive circles on Friday.

Alex Kane, a contributing writer for Jewish Currents with a strong online following, was one of the first on Twitter to criticise Yang’s comparison.

“What @AndrewYang just wrote: BDS is similar to Nazi boycotts of Jewish businesses,” Kane tweeted, paraphrasing the candidate’s words, which he said were “messed up” and “wrong”.

What @AndrewYang just wrote: BDS is similar to Nazi boycotts of Jewish businesses. (This is a messed up, wrong comparison, by the way.) https://t.co/ULWGVLO6e2

Speaking to Middle East Eye, Morriah Kaplan, the group’s spokesperson, denounced Yang’s remarks, pointing out that the U.S. is dealing with an actual re-emergence of white supremacy groups, which was on full display during the 6 January attack on the U.S. Capitol building.

“Comparisons that liken Palestinians, students, and advocates for Palestinian rights to Nazis and fascists, at a moment when neo-Nazis and fascists are attacking our nation and threatening our democracy, demonstrates that Andrew Yang is simply not serious about combating antisemitism,” Kaplan said, adding that young Jewish Americans are moving away from blanket support for Israel.

“Instead of repeating talking points from pro-Israel hawks designed to shield the Israeli government from accountability by intentionally blurring the line between criticism of Israel and antisemitism, Yang should listen to the rising generation of young Jews who demand freedom and dignity for all, no exceptions. We, too, are Jewish voters,” she continued.

The Andrew Yang for New York campaign did not respond to MEE’s request for comment by the time of this article’s publication.

Yonah Lieberman, one of the co-founders of IfNotNow, said Yang had lost his vote over the article.

“I sure as hell don’t want a Mayor who compares activists for Palestinian rights to fascists and Nazis. A shameful distraction from actual Nazis,” Lieberman tweeted.

The Adalah Justice Project also called out Yang for his statements, labelling them “simply wrong”.

“@AndrewYang misrepresents BDS to pander for Jewish votes. BDS is a Palestinian call for the international community to boycott Israeli state institutions and businesses until Israel respects international law and gives Palestinians basic freedoms,” the group said in a tweet that was shared by the Jewish Voice for Peace’s New York branch.

This is simply wrong. @AndrewYang misrepresents BDS to pander for Jewish votes. BDS is a Palestinian call for the international community to boycott Israeli state institutions and businesses until Israel respects international law and gives Palestinians basic freedoms. https://t.co/bhWKBMHioG

Linda Sarsour, a well-known pro-Palestinian activist and progressive organizer who had praised Yang in the past, slammed his take on BDS and called on the former presidential candidate to speak to NYC’s Palestinian population.

“This comparison is absolutely outrageous & false,” Sarsour, who worked closely on the Bernie Sanders presidential campaign, tweeted in a message to Yang. “It’s also dangerous”.

One Twitter account dedicated to Yang’s political aspirations pleaded for the entrepreneur, who launched his mayoral bid last week, to take back his statements.

“@AndrewYang please as one of many Anti-Zionist Jews this take is terrible,” the account dubbed “Yang Gang Forever” tweeted.

‘Israel is an apartheid state’

Arman said that the BDS movement, which has grown increasingly popular on college campuses over the years, “is the only mechanism available to people of conscience to hold [the] last apartheid regime in the world” accountable for its 70 years of “systematic genocide”.

Last week, B’Tselem, Israel’s leading human rights group, stirred global headlines when it declared that Israel is an “apartheid” state operating to advance “the supremacy of the Jews over the Palestinians”.

In an eight-page report, the group described all of present-day Israel and the occupied Palestinian territories as being organised “under a single principle: advancing and cementing the supremacy of one group–Jews–over another–Palestinians”.

The BDS movement, founded in 2005, has long described Israel as an apartheid state, pointing to the way the Israeli government restricts freedom of movement for Palestinian Muslims and Christians. Israel also has separate policing and prison policies, as well as laws and courts that govern the Palestinian population.

Israel’s military court system, which solely tries Palestinians, in 2010 self-reported a 99.74 percent conviction rate. Meanwhile, Israeli settlers, even when accused of committing a crime in the occupied West Bank, are tried in civilian courts.

Leading world bodies, including the U.S. Department of State, have been at times willing to criticize Israel’s human rights abuses, but have been largely unwilling to levy sanctions against Israel, which leaders in the U.S. and Europe generally view as a valued ally in the Middle East.

Support for Israel in the United States had for decades seemed to be a requirement for anyone running for public office, from city council to Congress, while speaking out against Israel’s treatment of Palestinians has generally been a death knell for any campaign.

While New York’s Alexandria Ocasio-Cortez has not explicitly voiced support of BDS, she has been critical of Israel, and in 2019 signed on as a co-sponsor of a resolution introduced by Omar that defends people’s right to boycott “in pursuit of civil and human rights at home and abroad”.

Meanwhile, some form of anti-BDS legislation, backed by pro-Israel lobby groups, has been passed in almost every U.S. state.

Part of the anti-BDS campaign has been spurred on by the International Holocaust Remembrance Alliance’s (IHRA) definition of antisemitism, a controversial definition that equates the BDS movement to antisemitism. The IHRA definition, to the dismay of one of its creators, has been used to criminalise pro-Palestinian activism.

With about 1.5 million Jews in the New York metropolitan area, the city has one of the largest populations of Jewish people in the world, second only to Israel.

The New York government has had strong ties with the country, and the New York Police Department opened its own branch in Israel in 2012.

Only five percent of Jewish Americans report that foreign policy is their top priority at the ballot box. Still, according to a 2019 Gallup poll, 95 percent of American Jews have favourable views of Israel, compared with 60 percent of the general U.S. population.

During his presidential campaign in 2019, Yang, a New York native, was more critical of Israel’s policies. At the time, he was running against several candidates–Bernie Sanders, Elizabeth Warren and Pete Buttigieg to name a few–who were sympathetic to the Palestinian cause.

Speaking to the New York Times, Yang said some of Israel’s actions were “deeply problematic and run afoul of some of the standards that we’d like to see countries meet”.

In December, Public Policy Polling, a U.S. Democratic polling firm, asked voters to choose between seven NYC mayoral front runners–including Yang, who was flirting with the idea of running but had yet to announce.

The poll found that with 17 and 16 percent respectively, Yang and Brooklyn Borough President Eric Adams led the race, with all other candidates at least 10 points back.

An ardent supporter of Israel, in 2016, Adams headed a delegation of New York law enforcement officials to Israel for “a five-day mission focused on developing transatlantic partnerships in public safety and economic development”.

Following Yang’s op-ed on Friday, Ross Barkan, a New York City resident and author, lamented that many of those running for mayor were ardent supporters of Israeli policies.

“Disappointing that once more BDS is linked directly to anti-Semitism,” Barkan tweeted.

All the top 2021 contenders for NYC Mayor are Israel hawks.