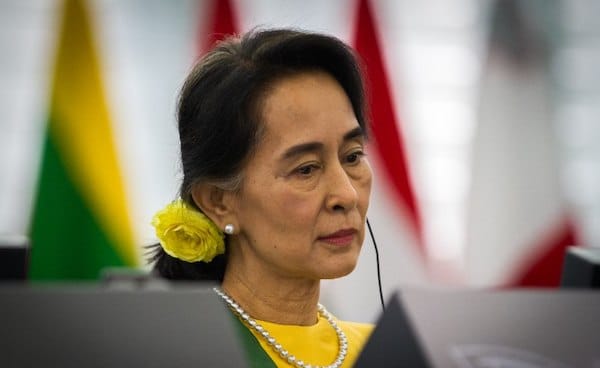 In the early hours of Monday February 1st, military dictatorship made an abrupt return to Myanmar (formerly known as Burma), geographically the largest state in South-east Asia and strategically bordered by Bangladesh, Thailand–and China.

For world leaders, journalists, and not a few diplomats and regional specialists, the coup seemed to come from nowhere: a below-the-radar turn of events that was as inexplicable as it was unexpected.

All began unfolding according to a familiar script: the arrest of the country’s civilian leader, Aung San Suu Kyi; the mass round-up of central and regional politicians, including ministers from her National League for Democracy (NLD) party; the blocking of roads by military vehicles and the heavy presence of troops on the streets of the capital Naypyidaw and Yangon (formerly Rangoon), the country’s largest city. A year-long state of emergency was imposed.

One aspect of the coup that was quickly apparent was its timing: the day when Myanmar’s new government, voted in during national elections in November 2020, was due to convene for the first time.

Perceptive observers had picked up the furious response of the Tatmadaw (the local term for the military) to the election results, by which the NLD won more than 80 per cent of available seats in the national parliament. This was a humiliation for the military, whose proxy political party fared miserably. Its drubbing soon saw the Tatmadaw levelling accusations of massive electoral fraud–charges subsequently rejected by the country’s electoral commission.

At one level, then, the military takeover can be read, if not quite as a matter of bruised egos, then as a heavy-handed reaction to a civilian government seen as uppity and pushing beyond army constraints. Some commentators have been framing it as a reaction to the ‘constitutional crisis’ created by the NLD’s big election win.

Yet under the 2008 constitution–the starting point of Mynamar’s laboured and incomplete progress away from untrammelled military rule–no civilian government, however compelling its majority, can hope to function free of army control.

Three key provisions of the constitution guarantee the army’s continuing sway. It controls 25 per cent of the seats in the national parliament; three key ministries–those of defense, home affairs and border control–are its exclusive preserve; and all constitutional amendments must garner the support of at least 75 per cent of sitting MPs (virtually impossible, given the army’s strategic chunk of assembly seats).

The constitution also bars anyone with a foreign spouse or children from holding the presidency; the relevant clause was written with Suu Kyi in mind (her late husband was British and her two sons hold British citizenship).

Given this constitutional set-up, the notion that the NLD’s emphatic electoral performance has posed some sort of existential threat to the military’s ironclad overseer role seems hard to sustain.

In addition, the idea that the NLD and other political formations the army has ‘permitted’ to take shape in Myanmar over the past ten years are broad-based entities capable mobilising all sections of society is challenged by Aung San Suu Kyi’s own track record.

Since November 2010, when she was released from protracted house arrest (amounting to 15 out of the preceding 21 years), Suu Kyi has been the dominating presence in Myanmar’s struggle to free itself from military rule. On the basis of her political ancestry (Aung San, her father, played a key role in the later stages of the country’s fight for freedom from British rule, finally achieved in 1948) and the moral standing and immense public support she still commands, Suu Kyi has come to embody Myanmar’s aspirations to an unusual degree, evoking comparisons to Nelson Mandela and other putative embodiments of saintliness and sacrifice.

Following her release from detention, Suu Kyi embarked on what can be described as an uneasy shuffle with Myanmar’s generals: a tentative two-step in which the subordinate partner was at all times constrained to watch her feet–not to mention her back.

That the dance was in progress at all was enough to encourage the lifting of economic sanctions by the U.S. and other overseas players. At the start of 2012, the World Bank began re-engaging with Myanmar, lending funds to government agencies and providing technical advice on “debt management” and foreign investment law. Foreign capital began flowing into the country, to a far greater degree than under an earlier round of neoliberal reforms, introduced by the military in 1988.

As elsewhere, the devastating consequences of economic liberalisation were soon evident in rural areas. In 2011, peasants in the western province of Monywa were forcibly evicted to make way for the Letpadaung copper mine, a joint enterprise of the Myanmar military and the Chinese company Wanbao. When in 2012 Suu Kyi visited the site as head of the government’s Letpadaung Investigation Commission, she told protesters they should respect the rule of law and “sacrifice their lands” for the good of the country’s development.

The compulsions of the dance (or perhaps something more than that) would also shape Suu Kyi’s stance towards the national question and the role of ethnic and religious minorities: perhaps the most divisive and bloody consequence of Myanmar’s colonial past and decades of military dictatorship.

If Burma has a hegemonic ideology. it’s the concept of “national races” (taingyintha) and its corollary, which holds that only members of those groups belong in the country. This set of beliefs is founded on an understanding of race that separates ethnic communities into discrete groups, attached to a particular territory and endowed with more-or-less unalterable cultural and often psychological traits.

In 2019, Suu Kyi’s adherence to this belief system was dramatically revealed during her appearance at the International Court of Justice in The Hague. Rebuffing allegations of genocide levelled at Myanmar’s military in the wake of its violent repression of Rohingyas in 2017–a blood-soaked campaign of rape, looting and murder which forced 730,000 Rohingya refugees to flee the country–Suu Kyi could not even bring herself to utter the word “Rohingya”: an implicit denial of their right to (long-denied) citizenship.

The ‘dangers’ of democratisation

By dancing with generals, Suu Kyi, in her position as the country’s de facto leader, would achieve for Myanmar a pared-down, militarily managed form of democracy. Some commentators have likened this to the dyarchy system imposed on Myanmar by the British back in 1923.

Contemporary critics were quick to recognise this as a ploy to incorporate moderate Burmese politicians into the colonial state apparatus. The system also worked to undermine resistance to colonial rule and side-line demands for immediate independence.

Viewed against this background, the fall of Myanmar’s fledgeling licensed democracy has implications that extend beyond the confines of a constitutional crisis. Awash with ethnic tensions, continuing separatist movements, and explosive economic and social pressures, Myanmar confronts its sclerotic generals with that most disturbing of prospects: the opening of space for popular mobilisation and expression. And all because of some imprudent dabbling with democracy.

Perhaps in military eyes, Aung San Suu Kyi is no longer up to the task of keeping a lid on it all.