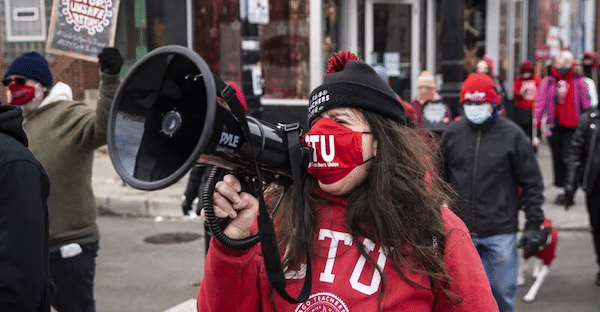 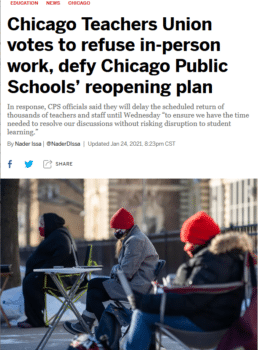 Chicago Sun-Times (1/24/21): “The strategy from union leadership has been to back CPS officials into a corner in negotiations.”

As FAIR (12/9/20) has reported, the New York Times has pushed for reopening public schools over teachers union concerns in New York City.

As the Chicago Sun-Times (1/24/21) reported, the Chicago Teachers Union (CTU) members voted not to work in person “because of health and safety concerns,” which the city said would be a strike action, though they subsequently agreed to “delay the scheduled return of thousands of teachers and staff,” leaving the outcome in limbo.

How much children can spread COVID-19 through in-person school is still a matter of some dispute (AP, 9/22/20; US News & World Report, 12/2/20). The Wall Street Journal (1/16/21) reported that “a consensus is emerging in Europe that children are a considerable factor in the spread of COVID-19—and more countries are shutting schools for the first time since the spring.” The Independent (11/7/2 0) reported on a Lancet study that found that “reopening schools following coronavirus lockdowns is linked to a surge in transmissions within a month.” 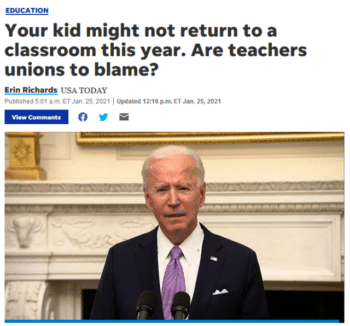 USA Today (1/26/21) framed the issue with a quote from a parent: “It feels like the union is looking out for themselves…at the expense of a whole lot of kids and families.”

But most to the point, JAMA (1/26/21) noted that while school reopening is possible, it can only be attained when safety standards are met; it noted that despite some evidence that schools aren’t superspreader sites, “staff and students should continue to have options for online education,” because “some school-related activities have increased the risk of SARS-CoV-2 transmission among students and staff.”

Yet a drumbeat in the press claims that it isn’t health and safety concerns appropriate to a deadly pandemic keeping schools closed, but meddlesome labor unions. USA Today (1/26/21) insinuated such in a prominently featured story, which after confidently asserting that “studies have shown in-school transmission of the virus is low” and that “thousands of schools have successfully brought kids back in person,” lamented:

Yet many parents are realizing their children may never see their teachers in person this year. A growing number blame their local teachers union.

The Chicago Sun-Times (1/21/21) urged against a strike on grounds that it would disrupt the education of preschoolers and special needs students who are already back to school, and disrupt the lives of working parents. The paper also said that the union should accept the incremental reopening plan because teachers are being fast-tracked for immunization. 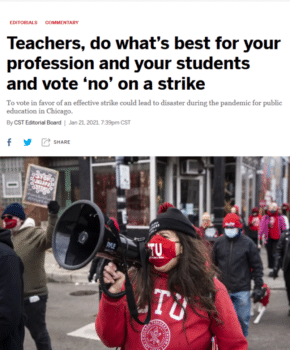 The Sun-Times (1/12/21) demands, “As the vaccine is rolled out to them in the coming weeks, teachers need to rise to the occasion and return to in-person teaching right now.”

To bolster their position, Sun-Times editors cited an op-ed in their paper (12/29/20) signed by more than a dozen doctors in support of school reopening. The op-ed concentrates on the risk of children as vectors, underplaying that adults, too, work in schools—and often take public transit to get there. Teachers in the U.S. are testing positive for COVID-19 at a higher rate than the general population, though that could be because teachers are tested more often (Chalkbeat, 1/12/21). In addition, new variants have introduced the possibility of increased risks in schools, as elsewhere (Science, 1/15/21).

The CTU points out (1/26/21) that teachers are “seeking a health metric based on CDC guidance, a phased reopening, access to vaccinations for educators, and enforceable safety standards in school buildings,” and that right now, schools are well short of those goals. Specifically, the union said that schools don’t have “access to adequate testing and tracing programs, proper PPE, necessary room ventilation and sanitization, and priority vaccination of educators and school support staff.”

The union’s position isn’t that schools can never open, but that safety standards should be met. Chicago school nurses also sided with teachers, arguing that the CPS reopening plan was unfeasible (WGN, 1/14/21), and an arbitrator ruled schools were unsafe for some workers last fall (Chicago Sun-Times, 10/2/20). 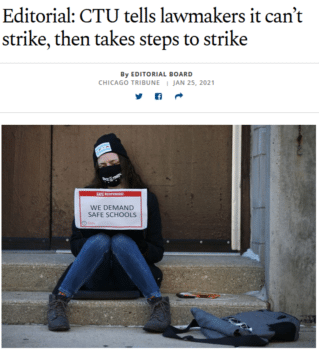 The Chicago Sun-Times board (1/12/21) had urged the union and the city to engage in reopening, despite outstanding concerns. The framing the board used, however, was deceptive. “Now more than ever,” the board wrote, “CPS and CTU must come together to make this reopening safe and successful,” adding that “the two sides have just got to be professionals, do their jobs and get over it.” This sounds like a middle-ground position, but it’s the city who wants to reopen quickly, and it’s the union that wants to stop reopening if it isn’t safe.

The very next part of that sentence cites a Sun-Times op-ed (1/11/21) from the leader of Educators 4 Excellence, which had the same framing. As FAIR (12/9/20) has previously reported, the group is a big-money backed, anti–teachers union organization. This framing has the aura of “compromising adult in the room,” when it is actually anti-union bullying. The CTU is, in fact, on record calling for a mediator to help settle the dispute (WGN, 1/26/21).

The Chicago Tribune editorial board (1/25/21) not only weighed in on this most recent work action, saying that the union is cloaking an “illegal” strike with trumped-up concern about safety, which will hurt minority students acutely. But this fits a general anti-CTU pattern, as the board had blasted (1/14/21) an attempt to loosen state legal regulations on the ability of teachers to strike; the legislation wouldn’t have an impact on the current reopening drama, but it was meant to give “Chicago teachers the same rights that teachers already have in every other school district statewide” (WTTW, 1/11/21). The paper also ran an op-ed (1/21/21) calling any strike move in response to pandemic reopening “illegal,” a clear echo of the city’s position (Chicago Sun-Times, 1/21/21). The opinion piece was written by an attorney from the legal outfit that argued the Supreme Court case Janus v. AFSCME, which imposed an anti-union “right-to-work” regime on all public-sector unions, like CTU, so the anti-CTU motivation is clear here.

Last month the Tribune board (12/14/20) rebuked a now-deleted CTU tweet calling reopening plans sexist and racist, using redbaiting (denouncing a CTU delegation to Venezuela—Chicago Tribune, 8/19/19) and pro-police rhetoric (the union has supported the call to “defund the police” in the wake of several brutal police killings of unarmed Black people in 2020) as dubious reasons to suggest the union was going too far to protect its members in a pandemic.

The editorial line echoes the paper’s coverage, which, despite CTU’s long history (In These Times, 10/29/19) of tying its demands to the needs of parents and teachers, portrayed a fight (lots of language about children being “left behind”) between teachers who didn’t want to go to work and students who need to get back to school (Chicago Tribune, 1/22/21). That framing is off balance, as NPR affiliate WBEZ (1/22/21) reported that “attendance figures [show] few students are actually choosing in-person learning,” and that “about 19% of students eligible to return for in-person classes walked into school buildings last week.” 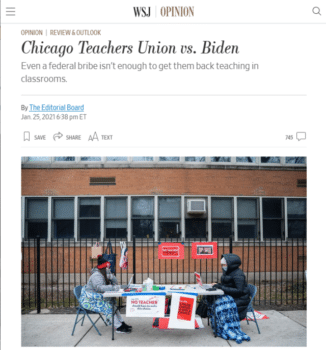 Wall Street Journal (1/25/21): “The real obstacle to getting kids back into classrooms is self-serving unions.”

The CTU is attracting anti-union outrage from media far from home as well. The Wall Street Journal editorial board (1/25/21), with its trademark hyperbole, said the union “is taking kids hostage to extract more money from Congress with no guarantee that it will release them if it does.”

It’s telling that the Lightfoot administration, a Democratic government in a Democratic stronghold like Chicago, must rely on right-wing, anti-union talking points from the city’s two newspapers to bolster its campaign against the teachers’ union. “Both the mayor and the two editorial boards represent the views of the wealthy and mostly white people in our city,” Rossana Rodriguez, a Chicago alderman (a city council member, in Chicago-speak) who was elected with the support of the Democratic Socialists of America, told FAIR. She went on:

The fact that only 19% of students [who are] back in schools showed up, and that they have refused to release the demographic data for these students, is highly concerning. The mayor has been talking about equality in the context of reopening schools the whole time. The statistics tell us that an overwhelming majority of the Black and brown families chose to keep their children remote. We know that the reopening plan is not about equality. Companies need employees back, and closed schools make that hard.

And the slant falls into the usual corporate media trap of framing these disputes as teachers putting their needs above those of students and families. Teachers are concerned about safety in the schools generally, not just for them, but for everyone who comes into contact with anyone who comes in and out of a school. There’s also a dehumanization of teachers when labor conflicts are framed as thought teachers’ concerns are antithetical to parents’ concerns. Many teachers are also parents. Many parents know or are friends with (or related to) a teacher. This framing serves to make unions into sterile political bodies, not a group of people with human concerns.

Parents, teachers, students and administrators would all likely agree that remote learning has been a headache (and heartache) for all involved. We’d all love to get back to so-called “normal.” The question is how to do this safely. The strike vote in Chicago represents working-class fear of the city’s plans. The editorial boards aren’t just taking an anti-strike stance, they’re telling workers to swallow their fears and do as they are told. This isn’t democratic governance.

This is not just a local squabble. Other than the fact that Chicago is one of America’s biggest cities, the CTU is a militant union that has set a standard for more social justice–oriented teacher unionists around the country who want to use the strike weapon, not for teacher pay and benefits, but to demand more investment in education and more resources for students (Jacobin, 10/13/20). Anti-union forces around the country depend on Chicago’s editorial boards to blunt the force of the CTU, lest it inspire more teachers around the country.