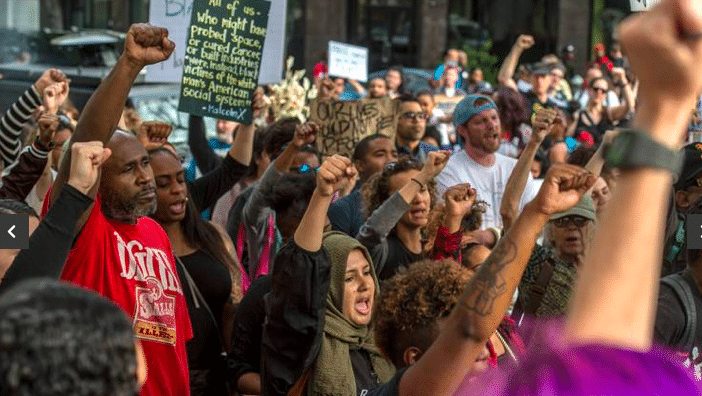 The first days of 2021–which will surely be remembered for police officers in Washington, D.C. removing barricades in order for white supremacists to storm the United States Capitol, confederate flag in hand–ask us to continue learning from the unprecedented uprisings of 2020, in which hundreds of thousands of people took to the streets to protest anti-Black police violence. The 2020 uprisings articulated transformative visions of a world without anti-Black violence, a world without hyper-funded police forces and thus a world with deep community safety and care.

In response to this sweeping vision, some of our employers within California’s public university systems have deemed calls for the removal of police from campuses a “non-starter.” Others have offered the false start of task forces, such as: UC Davis’s Task Force on Next Generation Reforms to Advance Campus Safety; UCLA’s Public Safety Advisory Council; and University of California President Michael Drake’s newest effort, University of California Campus Safety Symposium. Although the purpose of such task forces is purportedly to gather information on how policing on California’s campuses should function, students and faculty have already made their vision for the future of campus policing clear.

Over the summer, the California Faculty Association, a union representing faculty in the California State University system, issued a statement demanding that “CSU divest from its relations with police institutions throughout the state, defund campus policing, remove armed police from our campuses and join CFA in exploring community-based strategies as alternatives to policing that are based in community accountability and transformative justice.” The University of California Student Association also issued a statement calling for the UC Police Department to be “disarmed and dismantled.” The UC Academic Council, representing the academic senates of all ten UC campuses, approved a set of recommendations that included “substantially” defunding the UCPD, banning UCPD officers from carrying firearms and dissolving any partnerships with non-UC law enforcement agencies.

With more than 250,000 employees and nearly 800,000 students, UC and CSU campuses’ total populations rival that of the nation’s largest cities. And like those cities, campus police departments, as two recent studies have shown, disproportionately stop, search and arrest Black, Indigenous and Latinx members of the community.

Despite 200 incidents of reported use of force, the UC police system statewide has disclosed almost no records to support police transparency or accountability, nor has its transparency and accountability website been updated since 2016. CSU police officers have shot and killed at least two unarmed people on campus in the past decade. During the same time period, there have been UC-systemwide and specific policing task forces in 2012, 2013, 2018 and 2019. Each of these task forces has failed to address long-standing evidence of systemic racism that is both at the root of policing and characterizes its present form. The campus police forces we have are not in need of a task force; they are the outcome of task forces.

Task forces and many of the reforms they recommend (such as body cameras, more training and oversight boards) enable more spending on policing, not less. The UCPD budget has consistently gone up in the wake of task forces, including in the 2020-2021 year. By refusing to consider widespread calls by Black Lives Matter activists and organizers to defund and abolish the police, efforts to “reform” campus police departments will preserve a status quo that continues to threaten the safety of CSU and UC students and workers, particularly Black, Indigenous and Latinx people.

With the clarity of hindsight, we can see the absurdity, indeed the cruelty, of convening a task force to reform chattel slavery, or a public safety commission to imagine a kinder, gentler apartheid. As scholars, we tell you with authority that this is precisely the moment we are in now. And we invite the public university systems in California and around the country to recognize this moment, and step into it with a new vision–2021 presents us with the horizon of abolition.

Inspired by the work of K-12 students, teachers and parents who have successfully organized to substantially defund and remove school police forces from Oakland to Los Angeles, California, we amplify the demands of Black Lives Matter, the Movement for Black Lives, 8toAbolition and more who consistently call to remove police out of all institutions of public higher education. Why? Because the end of policing on college campuses is an achievable first step toward community safety for all.

As MPD150 reminds us, the work of abolition is not about instantly defunding every department in every campus, town or city. Rather, abolition is a process of strategically reallocating resources, funding and responsibility away from police and toward community-based models of safety, support and prevention. In place of the police on our campuses, we can learn from longstanding Black feminist traditions of community care and institution building, embodied in the work of Project NIA, Incite!, Critical Resistance, Survived and Punished and so many more.

Where skeptics ask, “But what about sexual assault on campus? What about substance abuse or gun violence?,” we point them to these organizations that have worked for decades on community-based alternatives to policing and prisons in precisely these situations. Guided by this tradition, and employing its practitioners as experts in the process, our campuses can incubate new institutions of community safety informed by the principles of transformative justice and reparative public goods. Public college must be free again, and it must provide the kind of healthcare, housing and wages to its community members that truly keep communities safe. True public safety will reconnect college campuses to their surrounding communities rather than nervously policing their privatized boundaries.

An end to policing as we know it is not only possible, but necessary. Students, faculty and other university workers have already been organizing to these ends, engaging in inspiring protests over the last decades in the face of relentless tuition increases, unlivable wages and anti-Black state violence. Indeed, more than half of the original members of Black Lives Matter were students, faculty and alumni of the CSU system.

The ruthless police response to these protests on our own campuses and by campus police forces is damning. For instance, in response to this summer’s uprisings, UCPD officers, flexing their statewide jurisdiction, carried tear gas cannons down Oakland streets; LAPD turned UCLA’s Jackie Robinson Stadium into a de facto detention facility, where protesters were processed by unmasked officers. Ten years ago, UC Davis campus police infamously teargassed seated protesters demanding an end to tuition increases, and UCSC drew national headlines in February, when–at a cost of $300,000 a day–it responded to a picket by striking graduate workers with a mass of riot gear-clad police. In each of these instances, violent policing forecloses the conversations we need to have about the distribution of public resources and the role of police in public life before we have had a chance to have them.

The good news in this new year is not only the clarity of the abolition vision but the fact that there is already a vibrant statewide and increasingly nationwide movement toward police-free campuses. In addition to the clear statements from both the University of California Student Association and the UC Academic Council, the first day of fall quarter 2020 saw coordinated actions on all ten UC campuses.

CSU students, faculty and staff also continue to lead community-based demonstrations throughout the state. These coordinated actions inspired movements on campuses across the country, at universities in Colorado, Connecticut, Illinois, Massachusetts, Michigan, New York, Pennsylvania and more. Together, we will continue to explore any and all options to organize for real transformation on our campuses.

Nelson Mandela famously said of the legal end of apartheid, “It always seems impossible until it’s done.” Join us in the possibilities of this new year, and never believe those who tell you it’s not possible. We will get it done, together.

Dr. Melina Abdullah is a professor and the former chair of Pan-African Studies at California State University, Los Angeles. Dr. Angela Y. Davis is a distinguished professor emerita in the History of Consciousness at the University of California, Santa Cruz. Dr. Robin D.G. Kelley is a distinguished professor and the Gary B. Nash Endowed Chair in U.S. History at the University of California, Los Angeles.
Monthly Review does not necessarily adhere to all of the views conveyed in articles republished at MR Online. Our goal is to share a variety of left perspectives that we think our readers will find interesting or useful. —Eds.