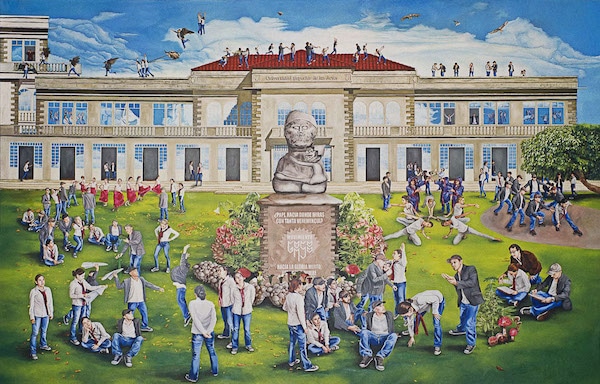 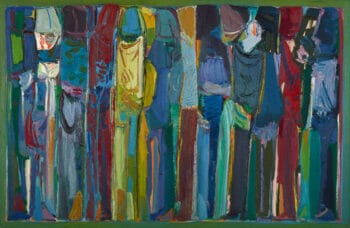 In 2019, 613 million Indians voted to appoint their representatives to the Indian parliament (Lok Sabha). During the election campaign, the political parties spent Rs. 60,000 crores (around U.S. $8 billion), 45% of which was spent by the Bharatiya Janata Party (BJP), the governing party; the BJP won 37% of the vote, which translated into 303 of the 545 seats in the Lok Sabha. A year later, a massive $14 billion was spent on the U.S. presidential and congressional elections, with the winning Democrat Party dominating the spending. These are massive amounts of money, whose grip on the democratic process is quite clear by now. Is it possible to talk about ‘democracy’ without being candid about the erosion of the democratic spirit by this avalanche of money?

Money floods the system, eats into the loyalties of politicians, corrupts the institutions of civil society, and shapes the narratives of the media. It matters that the dominant classes in our world own the main communications outlets and that these outlets shape the way people decipher the world around us. Although the United Nations’ Universal Declaration of Human Rights affirms that ‘Everyone has the right to freedom of opinion and expression’ (Article 19), the plain fact is that the concentration of the media in the hands of a few corporate entities circumscribes the freedom to ‘impart information and ideas through any media’. For this reason, Reporters Without Borders has an ongoing Media Ownership Monitor that traces the consolidation of the media held by corporate power, which in turn drives a political agenda within existing systems of government.

Aijaz Ahmad, Senior Fellow at Tricontinental: Institute for Social Research, argues that extreme right political projects find it possible to drive their agenda through democratic institutions, since the political structures in these countries–from the United States to India–have seen a considerable erosion of their democratic content. As Ahmad explains, the extreme right in countries such as the United States and India does not challenge the constitutional, liberal democratic form, but garrottes formal institutions by transforming society ‘in all domains of culture, religion, and civilisation’.

In Latin America, the extreme right has used every weapon to delegitimise its adversaries, including using perfectly good laws against corruption in a malicious way to target leaders of the left. This is a strategy called ‘lawfare’, where the law is used–often without evidence–to oust democratically-elected leaders of the left or to prevent them from running for office. Lawfare was used to remove Honduran president José Manuel Zelaya in 2009, Paraguayan president Fernando Lugo in 2012, and Brazilian president Dilma Rousseff in 2016; these leaders were all victims of judicial coup d’états. Brazil’s former president Luiz Inácio Lula da Silva was denied the right to run for the presidency in 2018 by a lawsuit of no merit whatsoever amidst predictions in all polls that he would win. Argentina’s former president Cristina Fernández de Kirchner faced a series of cases beginning in 2016, all of which prevented her from running again in 2019 (she is now the vice president, a testament to her popularity in the country). 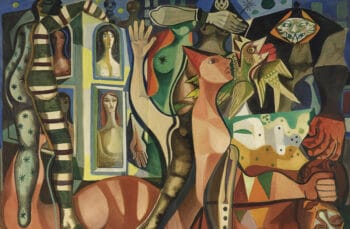 In Ecuador, the oligarchy used the techniques of the guerra jurídica (‘legal war’) to delegitimise the entire left, especially former president Rafael Correa (2007-2017). Correa was accused of bribery–with the bizarre notion of ‘psychic influence’ (influjo psíquico) at the root of the case. He was handed down an eight-year sentence which prevented him from running for office in Ecuador.

Why was Correa anathema to both Ecuador’s dominant class and to the United States? The Citizens’ Revolution that Correa led passed a progressive constitution in 2008, which put the principle of ‘good living’ (buen vivir in Spanish and sumak kawsay in Quechua) at its heart. Government investment to strengthen social and economic rights came alongside a crackdown on corporate (including multinational) corruption. Oil revenue was not parked in foreign banks, but used to invest in education, health care, roads, and other basic infrastructure. From Ecuador’s population of 17 million, nearly 2 million people were lifted out of poverty in the Correa years.

Correa’s government was an aberration to the multinational firms–such as the US-based oil company Chevron–and to the Ecuadorian oligarchy. Chevron’s dangerous case for compensation against Ecuador, brought forward before Correa took office, was nonetheless fiercely resisted by Correa’s government. The Dirty Hand (Mano Negra) campaign put enormous international pressure against Chevron, which worked closely with the U.S. embassy in Quito and the U.S. government to undermine Correa and his campaign against the oil giant.

Not only did they want Correa out, but they wanted all the leftists–called Correistas by shorthand–out as well. Lenín Moreno, who was once close to Correa, ascended to the presidency in 2017, switched sides, became the main instrument for fragmenting the Ecuadorian left, and delivered Ecuador back to its elites and to the United States. Moreno’s government gutted the public sector by defunding education and health care, withdrawing labour and housing rights, attempting to sell off Ecuador’s refinery, and deregulating parts of the financial system. Collapsed oil prices that led to cuts in oil subsidies, a hefty loan from the International Monetary Fund at the cost of austerity measures, and mismanagement of the pandemic battered Moreno’s legitimacy. A consequence of these policies has been Ecuador’s appalling response to the pandemic, which includes accusations of the deliberate undercounting of as many as 20,000 COVID-19 deaths. 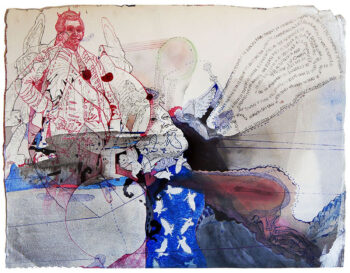 To ingratiate himself to the United States, Moreno ejected WikiLeaks founder Julian Assange from Ecuador’s London embassy, arrested computer programmer and privacy activist Ola Bini on a concocted case, and launched a frontal attack against the Correistas. The political organisation of the Correistas was broken up, its leaders arrested, and any attempt to regroup for elections denied. Once such as example is the Social Compromise Force or Fuerza Compromiso Social platform, which the Correistas used to run for local elections in 2019; this platform was then banned in 2020. A February 2018 referendum was barrelled through the country, allowing the government to destroy the democratic structures of the National Electoral Council (CNE), the Constitutional Court, the Supreme Court, the Judiciary Council, the attorney general, the comptroller general, and others. Democracy was hollowed out.

A month before the 7 February 2021 presidential election, it appeared clear that in a fair election the candidate of the left, Andrés Arauz Galarza, would prevail. A range of pollsters suggested that Arauz would win in the first round with over the threshold of 40%. Arauz (age 35) is an attractive candidate with not a whiff of corruption or incompetence around him for his decade of service in the Central Bank and as a minister in the last two turbulent years of Correa’s government. When Correa left office, Arauz went to Mexico to pursue a PhD at the National Autonomous University of Mexico (UNAM). The oligarchy has used every means to block his victory.

On 14 January, the U.S. International Development Finance Corporation (DFC) provided Ecuador with a loan of $2.8 billion to be used to pay off Ecuador’s debt to China and to ensure that Ecuador pledge to break commercial ties with China. Knowing that Arauz might win, the U.S. and the oligarchy of Ecuador decided to tie the Andean country to an arrangement that could suffocate any progressive government. Formed in 2018, the DFC developed a project called América Crece or ‘Growth in the Americas’, whose entire policy framework aims to edge out Chinese business from the American hemisphere. Quito has since signed up for Washington’s ‘Clean Network’, a U.S. State Department project to force countries to build telecommunications networks without a Chinese telecom provider involved in them. This particularly applies to the high-speed fifth generation (5G) networks. Ecuador joined the Clean Network in November 2020, which opened the door for the DFC loan.

Correa drew in $5 billion from Chinese banks to enhance Ecuador’s infrastructure (particularly for the construction of hydroelectric dams); Ecuador’s total external debt is $52 billion. Moreno and the United States have painted the Chinese funds as a ‘debt trap’, although there is no evidence that the Chinese banks have been anything but accommodating. Over the last six months of 2020, Chinese banks have been willing to put loan payments on hold until 2022 (this includes a delay on the repayment of the $474 million loan to the Export-Import Bank of China and the $417 million loan to the China Development Bank). Ecuador’s Finance Ministry says that, for now, the plan is for repayment to start in March 2022 and to end by 2029. Moreno took to Twitter to announce these two delays. There were no aggressive measures taken by these two banks nor from any other Chinese financial entity.

Essentially, the DFC loan attempts to sabotage an Arauz presidency. This US-imposed conflict against China in Latin America is part of a broader assault. On 30 January, Tricontinental: Institute for Social Research held a seminar alongside Instituto Simón Bolívar, ALBA Social Movimientos, and the No Cold War platform to reflect on the Latin American battlefield of this hybrid war. 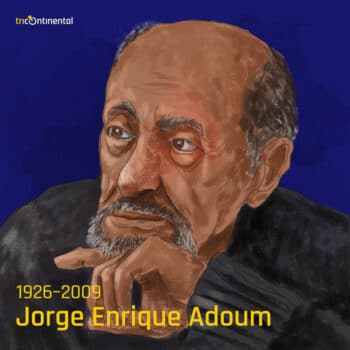 Despite the hollowing out of democracy, elections remain one front in the political contest, and in that contest, the left fights to summon a democratic spirit. Perhaps poetry is the best way to articulate the texture of this conflict. Out of Ecuador’s rich tradition of emancipatory thinking came the writer and communist Jorge Enrique Adoum. Here’s a part of his powerful poem, Fugaz retorno (‘Fleeting Return’):

And we ran, like two runaways,
to the hard shore where stars
came apart. Fishermen told us
of successive victories in nearby provinces.
And our feet got wet with a spray of dawn,
full of roots that were ours and the world’s.

‘When is happiness?’, the poet asks. Tomorrow. Are we not all in search of tomorrow?