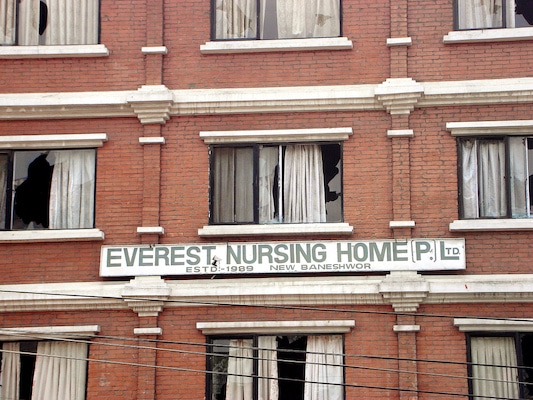 Historically, the châteaux of the Loire Valley were assessed by their windows. ‘A fifty-windowed castle’, an onlooker might surmise to suggest its worth. Russian boyars quantified their properties in souls–whether dead or alive, according to Gogol’s Dead Souls. Great nursing home corporations, on the other hand, are measured in beds. Take the four biggest nursing home operators in the UK: HC-One Ltd (22,000 beds, and curiously the same number of employees), Four Seasons Health Care (20,000), Barchester Healthcare and British United Provident Association (12,000 each). In the financialized world of elderly care, each bed corresponds to a patient, causing confusion over what exactly is bought, sold or offered as a guarantee for loans. Normally envisaged as a vortex of derivatives, futures, swaps and options, it’s somewhat strange to imagine international finance as an emporium of impaired senior citizens. But that is how it is. Data on beds alters continuously, and, as you read, the statistics might already have changed, modified by trades or mortgages for plots of patients. The case of Four Seasons, which was recently acquired by the American hedge fund H/2 Capital Partners from the City financier Guy Hands, is just one example. The fund was ultimately forced to sell part of its assets (patients) to settle debts it had incurred in the firm’s acquisition.

This whirlwind of mergers and sales is even more dizzying in the U.S., where in 2007 Genesis Healthcare–then the largest manager of nursing homes in the country–was bought for $2 billion by the Atlanta-based hedge fund Formation Capital, only to be put back on the market seven years later. Also in 2007, the second biggest provider, HCR Manor, was bought for $4.2 billion by the private equity firm Carlyle Group. Its real estate portfolio was of particular interest to investors, who promptly resold the company for $6.1 billion to a real estate investment trust in 2010. In 2018, HCM Manor filed for bankruptcy.

Naturally, in Europe we enjoy the benefits of a common market for elderly patients, and the free movement of beds. Korian, a large multinational, owns 25,000 beds in France and 5,000 in Italy, with homes in Germany, Spain, Belgium and the Netherlands–a total of 71,500 beds, which turn over a yearly €3 billion. In Italy the De Benedetti family, owners of the group GEDI (which publishes such ‘progressive’ papers as Repubblica, Espresso,and countless local outlets), control the KOS group, operating 92 facilities in Italy and 48 homes in Germany, totalling 12,800 beds.

Whilst the centrality of nursing homes to the speculative manoeuvrings of big finance might not test the limits of our imagination, it’s still curious to note the extent to which senile incontinence features in the dealings of global capitalism (in the U.S. the industry is worth a total of $129.8 billion; 15,600 facilities and 1.7 million beds for some 1.4 million patients)–not to mention its role as a profitable venture for members of Italy’s enlightened bourgeoisie.

But the role the exploitation of senescence plays in our contemporary world goes beyond the dealings of international finance capital. Nursing homes are an essential part of the structure of modern production. Without them, our entire mode of social organization would be impracticable. If dedicated facilities for the elderly did not exist, families would require far more spacious housing than the present norm, as reduced living space is the sine qua non of metropolitanism. Relatedly, without a place where one can ‘park’ or ‘store’ the elderly in the final phase of their earthly sojourn, the possibility for geographic (read professional) mobility would be greatly impaired. Younger generations would struggle to move to distant cities, or switch jobs with ease. The much-acclaimed ‘flexibility’ of modern labour tacitly requires dismantling the extended family and atomizing life itself.

Nursing homes (known as Pflegeheimen in Germany, maisons de retraite in France, case di riposo in Italy) are pivotal nodes which enable the functioning of all other spheres of life. They are, moreover, essential for the management of the growing number of human beings amongst us that have not quite died, yet have ceased to live (a peculiarity of modernity is that death has been stretched out of proportion, the agony now lasting not days, but months or often years). To paraphrase what Upton Sinclair wrote about Chicago stockyards, in nursing homes one can hear the death rattle of the universe.

The nursing home is a vital institution for the modern regime of biopolitics. It is biopolitics incarnated in a diaper. Hence why the silence surrounding them since the start of the pandemic has been so baffling. At first, fleeting sympathies and unbearable crocodile tears were offered for the COVID-19 massacre in nursing homes. The slaughter did not stop during the second wave; on the contrary, it became even more lethal. But nobody talks about this anymore–at most it is mentioned in passing. Nursing home deaths may have been mourned, and the institutions themselves indignantly denounced as a contemporary Lager Sylt, but they have never been addressed as a problem to be solved. A very difficult problem, since, as we have seen, if we take this small piece out of the mosaic, the whole social puzzle falls apart.

Nursing homes are direct descendants of almshouses, whose origins hark back to the High Middle Ages. These hospices were a nightmare reserved for the most impoverished, much like the abominable workhouses built for the ‘impotent poor’, cited in in Elizabeth I’s Old Poor Law. Winding up in a hospice was the most inhuman and unhappy of fates. Their establishment was considered an act of charitable benevolence; in 1899, for instance, Giuseppe Verdi felt obliged to fund in Milan a casa di riposo per musicisti (‘resting home for musicians’) catering to his less fortunate colleagues. This was the era of the so-called mouroir (to use an almost untranslatable French neologism from the 1800s, similar to boudoir for housing, or fumoir for theatre): the ‘deathery’. Forget the bourgeoisie; it would not ever have occurred to a member of the working class to voluntarily send a parent to one of these establishments. Today, however, the average cost of residing in an American nursing home is truly stunning: $245 per day (amounting to nearly $90,000 per year), with figures reaching peaks of $963 per day in Alaska. Hospices seem to have undergone the same process Robert Castel observed with wage labour in From Manual Workers to Wage Laborers:

One was waged when one was nothing and had nothing to trade except the strength of one’s own arms. A person fell into wage-labour when his status was degraded: the ruined artisan, the smallholder whose land no longer provided enough food. Even in 1922, France’s Parti Radical proposed ‘the abolition of wage-labour, a residue of slavery’. Yet after that, wage-labour–defined as full-time work for an indeterminate period–seemed destined to become the very condition of modernity…

The wage relation was once considered a hellscape; now true damnation consists in being banished from it. Hospices were once a last resort, whilst now they represent an ineluctable destiny–even for the wealthy.

How did this phenomenon, almost a century after the mouroirs, become the norm for both the lower and upper middle classes? Two things occurred, essentially. We’ve already observed the first; a changing labour market combined with rising life expectancy creates a situation where the elderly need to be ‘stored’ (to guarantee them the space and assistance that has become impossible to provide them with at home). Even wealthy families–which previously would have spent money to care for their elderly at home–now invest similar sums to ‘house’ them in equipped facilities.

The second decisive factor has been the expansion of the welfare state. Tutelary laws towards the elderly helped finance and create a market for a growing number of homes and residences. This was perceptible in the speculative boom the U.S. witnessed at the beginning of the 1970s, after the creation of the first healthcare assistance programs for over-65s (Medicare) and for those in most need (Medicaid) in 1965. Between 1960 and 1975, the number of facilities in the U.S. the number of facilities grew by 140%, number of beds by 302% and income by 2,000%.

It is in nursing homes, then, that we witness an overlapping of the bureaucratic logic of government and of the business logic of profit. In France and Germany, different degrees of assistance for the elderly have been established based on the patient’s level of independence. In France, patients are classified into GIRs (groups iso-ressource); from GIR 1 (complete mental and physical dependence) to GIR 6 (no significant dependence). In Germany, there are 5 different PGs (Pflegegrad); PG1 (mildly compromised independence) to PG5 (severely compromised independence). These levels help determine the proportion of patients to staff in any given facility. In Bavaria, PG1 patients require an average of 6.7 carers, whilst those in PG5 are usually satisfied with just 1.78.

As happens in other industries, almost the entirety of public funds allocated to elderly care has for some time been (and continues to be) channelled to private interests: already in 1980, 80% of patients globally were cared for in commercial facilities. Today, private firms own 381,524 of the 456,545 beds in the UK. In the U.S., 68% of nursing homes are for-profit, 22% are run by private non-profits (like the Evangelical Lutheran Good Samaritan Society, which controls 9,340 beds and Ascension Living, with 4,562) and 6% are publicly owned. In Germany, 70% of beds belong to private companies. The only outlier in this trend is France; 44% of its homes are controlled by the state, non-profits own around 31%, and private companies hold the rest.

But dependence on state funds also renders nursing homes vulnerable. Recurrent cuts to public spending explain why in the 2000s operators incurred increasing debts, to the point of being swallowed up by hedge funds. During this period, the private sector pushed for deep public spending cuts, only to find that this frugality had rebounded–damaging their own profits.

Nursing homes thus present a conceptual difficulty. They represent one of the most contradictory and intractable aspects of our current mode of cohabitation, which many are reluctant to acknowledge. In this respect we resemble Benjamin’s Angelus Novus: our backs are obstinately turned away from nursing homes, all the while moving irresistibly in their direction, unaware of the destiny they represent for us all.

To conclude with an analogy which highlights the ineluctable weave of the modern, a site modelled on TripAdvisor has now been created for British nursing homes, which ranks each establishment according to its services and value for money. When flicking through the criteria by which they’re assessed, one notices a significant crossover with the extraordinary Prisons Handbook published by Pluto Press, which guides inmates and their relatives on the various facilities provided by the institutions: whether conjugal visits are allowed, whether there’s a children’s play area, gym or library, wifi in the cells, proper sanitary conditions and so on. Both exemplify the range of options within these carceral settings, although the former is nowhere near as comprehensive–unfortunately for us, since we’re more likely to have use for it.