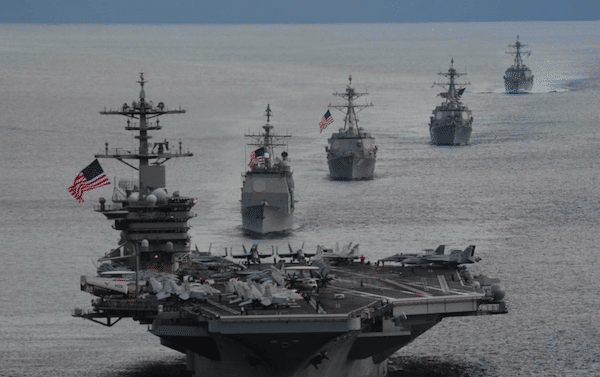 In his first presidential visit to the Pentagon yesterday, Joe Biden announced the creation of an anti-China task force. This team will review the Pentagon’s policy towards the country in areas such as strategy, technology, military and diplomacy with neighboring countries. During the visit Biden pledged to “meet the China challenge … and win the competition of the future.”

Career politician and long-time Biden aide Ely Ratner has been tapped to lead the task force targeting China. Ratner has continually advocated for bipartisan aggression against China in his roles at the pro-war Center for New American Security, the State Department, and elsewhere.

In 2017 Ratner described China’s calls for non-conflict, mutual respect and win-win cooperation with the United States as a “festering concept.” Ratner wrote in the influential journal Foreign Policy:

Enough is enough. Senior Trump administration officials should make it a top priority to dispense with this concept as soon as possible, first by politely and privately asking Beijing to refrain from using it, and then, if necessary, by publicly denouncing it. The longer they wait to do this, the harder and more awkward it will get.

China is not the threat

The United States has targeted China as its principal priority since the Obama administration’s “Pivot to Asia” doctrine, marking a major aggressive shift with the largest country in the world by population and second-largest by economy.

Every year the U.S. military publishes two versions of a report assessing China’s armed forces: one classified and one public. The 2020 public report lists a number of “threats”, including China’s single foreign military base and China’s nuclear warhead stockpile “estimated to be in the low 200s.”

But China is not the aggressor. Its lone military base in Djibouti is just a few miles from Camp Lemonnier, among the largest of the Pentagon’s 800+ overseas military bases. And its nuclear stockpile, none of which have been deployed, pales in comparison to the thousands of nuclear weapons in storage and deployed by the United States around the world.

A 1996 report by the Natural Resources Defense Council estimated that the U.S. built more than 70,000 nuclear warheads from 1945 to 1995, more than every other nuclear-armed country combined. During the second term of the Obama administration the U.S. embarked on a $1 trillion effort to “modernize” the nuclear weapons stockpile and build “usable” nuclear weapons.

Biden spoke to Chinese president Xi Jinping hours after revealing the new anti-China task force. With standard imperial hypocrisy Biden criticized China over its internal affairs including its handling of the pro-Western protests in Hong Kong and anti-terrorism policies in the Xinjiang autonomous region. His Chinese counterpart did not bring up the fascist-led insurrection on Jan. 6 that nearly saw the kidnapping or even assassination of many U.S. politicians.

On top of that, In the last week the U.S. Navy sent a warship through the highly politically sensitive Taiwan strait in an attempt to provoke China and inflame tensions. Days later, the U.S. sent two carrier strikes groups–a collection of warships and aircraft carriers–to conduct war simulations in the South China Sea. Just one strike group hosts thousands of soldiers, and costs $6.5 million each day to operate.

War criminal and former Secretary of State Henry Kissinger euphemistically described these warships as “100,000 tons of diplomacy”. Of the 41 active aircraft carriers in the world, the United States controls 20 outright. Another 13 are operated by U.S. junior partners and client states.

The U.S. government, not China, is the aggressor and the real threat to peace.