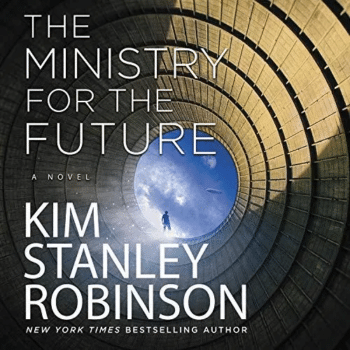 We need no longer speculate about whether we live in a climate emergency. The scientific verdict has been out for some time now, each year’s report grimmer than the last. The UN World Meteorological Organization’s most recent report tells us that Artic and Greenland ice sheets are melting at faster rates, the oceans are moribund, that there were a record number of hurricanes in the Atlantic, floods in Asia and Africa, droughts and wildfires in the Americas, and climate refugees the world over. And this is to say nothing of deforestation, depleted soils, polluted air and water, and biodiversity loss. The World Wildlife Fund’s most recent report tells us that mammal, bird, fish, amphibian, and reptile populations have fallen an average of 68% since 1970. “Our relationship with nature,” as they put it,

Whether consciously or otherwise, we all know it, and we’re asking the same questions: What are the alternatives? And how do we get there?

The fairy tale that we can spend and innovate our way out of this catastrophe is no doubt seductive. “Market-based solutions” and technological wonders will come to our rescue, we’re told. It’s just a matter of time and the right “incentives.” Who wouldn’t want to believe such a quaint story? But not a few of us find that answer either naïve or inadequate. The Sunrise Movement, Extinction Rebellion, climate strikes, indigenous land and water protectors, and Green New Deal advocates are evidence that we may have bid farewell (and good riddance!) to incrementalistic reforms and environmentalism lite. Indeed, we may even have entered an era in which utopian thought (and its literature) will blossom anew, if only because we can’t afford anything less than the impossible!

Kim Stanley Robinson’s latest novel, Ministry for the Future, is one such work. A scenario of the next thirty or so years, it tells the story of how we might get out of this “unholy mess” and lay the groundwork for a far healthier and more equitable future. The good news is that many of the models, institutions, and tools are already at hand; they just need to be coordinated, scaled up, and fortified. Easy.

Not quite. Robinson is no fantasy or wistfully utopian novelist. He knows both history and science too well to believe that any such future will come of its own accord. Or, put differently, as a former student to none other than Frederic Jameson, he knows too well that it’s easier to imagine the end of the world than the end of capitalism. So what will it take? And how do we get there?

The novel opens with the likeliest of impetuses, namely catastrophe. A heat wave strikes India and kills 20 million. The world mourns and pious pledges are made, but no real change comes. India is furious. “Everyone knew that not enough was being done [about climate change], and everyone kept doing too little.” So India takes matters into its own hands. A leftist front comes to power with a mandate to do more, indeed whatever it takes. The choice is made to release sulfur dioxide into the skies in order to simulate a volcanic eruption and its cooling effect. It works, but it’s only triage. There must be more durable and desirable solutions. And so the energy sector is nationalized, coal plants are decommissioned, solar arrays are installed, the state of Sikkim becomes the exemplar of agroecology and farmers’ rights, and Kerala the vanguard of participatory democracy.

But this is only India. Ecosystems and climate disasters know no real borders. The Great Turn has to be planetary. It is in this context that an international body, dubbed the Ministry for the Future and affiliated with the Paris Accord, is resuscitated and enlivened to do more. Headed by Mary Murphy, a former foreign minister for Ireland, and an eclectic team of scientists, economists, lawyers, and technicians, the Ministry gets to work. Legal status is granted to future human generations and to non-human animals and ecosystems, on whose behalf the Ministry sues polluters and other miscreants; the ground water under enormous glaciers in the Artic and Antarctica is pumped out in order to slow their slide into oceans (and, thereby, slow sea level rise); and regulatory regimes in carbon emission and sequestration as well as new money and banking systems are devised.

But what real power does the Ministry have to persuade the likes of central banks, the OPEC states, and multinational corporations—let alone Global North consumers? This is where the Children of Kali come in, an underground ecoterrorist organization that has no mercy for the guilty. With drones, torpedoes, pathogens and righteousness, they and other anonymous “soldiers” do their part in the War for the Earth. Among other things, fossil fuel powered private jets and ocean liners are shot down or sunk; coal power plants sabotaged; mad cow disease deliberately injected to tank beef consumption; and the world’s elite are held hostage at their beloved Davos, if only for a week.

Whether the Children of Kali are responsible for all this, and whether they are in fact the Ministry’s “black wing,” is left somewhat ambiguous in the novel, but the takeaway is unmistakable: Robinson believes everything must be on the table. As he says in an interview with Rolling Stone, “There should be no pieties. No political truisms at this point.” And for Robinson that means propaganda by the deed as much as geoengineering—neither of which, needless to say, are welcome eventualities.

But the stakes, the novel tells us, are unprecedented and the injustices unforgivable. When Frank May, a traumatized survivor of the India heat wave, abducts Ministry head Mary Murphy, he insists: “If your organization represents the people who will be born after us, well, that’s a heavy burden! It’s a real responsibility! You have to think like them! You have to do what they would do if they were here.” “I don’t think they would countenance murder,” she replies. To which Frank hollers out,

Of course they would!

It’s easy to balk at this when you reside in one of the “resilient” economies (or classes) of the world, and neither food nor water security (let alone extinction) are your daily or imminent troubles. The novel dares us as such to reconcile our piety for nonviolence with our political and historical realities. But it likewise insists that violence, however expedient or expected, will not suffice. What we most need are emphatically reformed institutions, policies, technologies, and ideologies—even if that means a renewed Earth Goddess religion. The reigning religion of the world is, after all, “Growth! Growth!” In lieu of it, says the novel, we need some ensemble of scientifically sound policies and an ethos of “mamma Gaia” worship, which is to say a revitalized reverence for our sources of “food, warmth, touch, love.”

If this sounds gender normative, the novel is anything but. It is hard to miss the fact that women are the vanguard of this Great Transition. From Mary Murphy and her Russian colleague, Tatiana the lawyer, to the Indian diplomat Chandra Mukajee and Chinese finance minister Madame Chan (let alone the Hindu goddess Kali!), it is disproportionately women who lead the fight for a livable planet and just future. And one of those prized fights is very much in a domain dominated by men, namely finance. Hence, the Ministry and its allies fight for carbon taxes and a new international currency backed by the major central banks, a currency that is issued only to those who forgo carbon emissions and, instead, invest in its sequestration. In effect, it’s a scheme to buy out the petro-states and fossil fuel conglomerates with a modest yet secure compensation for their troubles, amortized over the remainder of the century. They also exploit blockchain technology to create a worldwide credit union that, as a happy corollary, abolishes tax havens. Little wonder that the Ministry’s headquarters in Zurich gets bombed and that Mary spends most of her career in a safe house!

Not surprisingly, it’s a rocky road: strikes, revolts, assassinations, conferences, agreements, a Little Depression, a Super Depression, more strikes, more revolts etc. etc. etc. But in a not too far off future (the late 2040s?), there is much to celebrate. Thanks mainly to “nature-based” solutions like kelp beds, reforestation, and a rewilding of the Earth, coupled with renewable energy (especially solar and hydro), the global CO2 ppm has not only leveled off but begun to drop. Universal basic services, job guarantees, and an income ratio of 1 to 10 have also been broadly instituted, and climate refugees have either returned home or been granted world citizenship.  Happy days!

Yes and no. There is work yet to be done. Patriarchy, misogyny, nuclear arsenals, “failed states,” ocean die-offs, pollution, a hideously yellow Artic (which has been dyed to reflect sunlight back into space), and “American stupidity and hubris” all continue to plague humanity and the planet. “A success of failures,” as the novel whimsically puts it. Or, as Slavoj Zizek would say, a novel that takes revolutionary tragedy and hope to its rigorous conclusions, namely that our only true credo is to “fail better.”

Atmospheric concentrations of carbon dioxide (and, worse yet, methane and nitrous dioxide) continue to rise. As scientists and environmentalists have said, if we do not radically mend our ways, our chances of staying below the 2C threshold set out by the Paris Accord are next to zilch. “Everyone knew that not enough was being done [about climate change], and everyone kept doing too little.” So lace up your boots! As literary critic Gerry Canavan has put it,

if you’re reading this, you are the Ministry for the Future. Get back to work.

Born in Puerto Rico and raised in southern Florida, Eric Morales-Franceschini is a former day laborer, U.S. Army veteran, and community college grad who now holds a PhD from UC, Berkeley and is Assistant Professor of English and Latin American Studies at the University of Georgia. His scholarly works have appeared or are forthcoming at Global South Studies, Journal of Postcolonial Writing, Centro, and Comparative Literature and his poetry and reviews at Moko, Witness, Acentos Review, The Rumpus, Newfound, and elsewhere.