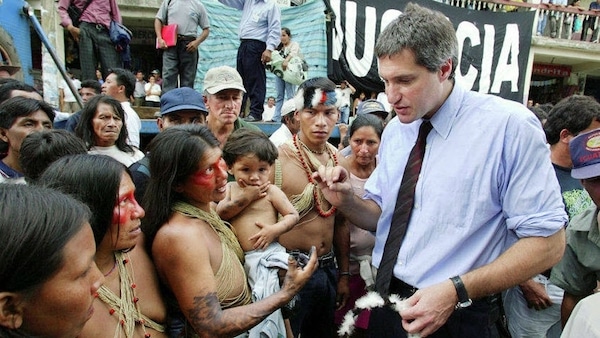 “We pledge to boycott Seward & Kissel recruitment activities in response to the firm’s unethical prosecution of U.S. human rights attorney Steven Donziger,” the students wrote in a letter with signatories representing 52 law schools.

The letter was organized at Stanford and several other law schools that Seward & Kissel relies on as a pipeline for new hires. Shockingly, the Seward firm is prosecuting Mr. Donziger in the name of the government even though it has a client relationship with Chevron and even though the charges were rejected by the U.S. Attorney in New York.

Seward’s targeting of Mr. Donziger is thought to be the first corporate criminal prosecution in U.S. history and has been called a violation of U.S. and international law by international lawyers who serve on a trial monitoring committee that is tracking the case. (See this background article.)

“We are proud to stand in solidarity with Steven Donziger in the face of this unprecedented assault by Chevron and its allies.” said Catherine Rocchi, the president of Stanford’s Environmental Law Society.

Human rights violations are happening in plain sight in New York City. Seward & Kissel’s behavior is an embarrassment to our courts, the legal profession, and the United States’ global image.

“This injustice affects all of us,” added Rocchi.

As members of the legal community, we feel obliged to take a stand.

“We are horrified by the precedent this corrupt prosecution sets,” said Elias Schultz, a Stanford law student who also organized the letter.

No matter what type of employment we will seek after law school, we must avoid firms involved in this assault on human rights lawyering. Seward’s brazen push to punish lawyers who challenge its corporate clients puts it as the top of this list.

Donziger was instrumental in helping Indigenous peoples and rural farmers in Ecuador’s Amazon win the pollution judgment against Chevron in 2011 after the company was found liable for dumping 16 billion gallons of cancer-causing oil waste onto Indigenous ancestral lands. The judgment has been affirmed for enforcement purposes by 29 appellate judges, including the entire Supreme Courts of Ecuador and Canada.

After having insisted for years that the trial take place in Ecuador, Chevron’s lawyers later vowed never to pay the judgment and have threated the Indigenous groups with a “lifetime of litigation” if they don’t drop their claims. Chevron also pushed for Mr. Donziger to be held in criminal contempt of court after he appealed an apparently unlawful order that he turn over his computer and cell phone to the company–devices that contain highly sensitive and confidential attorney-client information.

Filed by Judge Lewis A. Kaplan, the contempt charges were rejected by the regular federal prosecutor in New York. Judge Kaplan then appointed the Seward & Kissel law firm to “prosecute” Mr. Donziger knowing the firm had financial ties to Chevron. Kaplan also appointed a judge to preside who is a prominent member of the Chevron-funded Federalist Society, another flagrant conflict of interest.

Even more bizarre is that the Seward firm, via lead partner Rita Glavin, never revealed it had a client relationship with Chevron while pushing for Mr. Donziger’s pre-trial home detention. Glavin herself has a history of ethical lapses that took place when she was a supervisor of the botched prosecution of former Alaska Senator Ted Stevens in 2008. (See here.)

Legendary U.S. civil rights attorney Martin Garbus—who has represented Nelson Mandela—has called Seward’s prosecution of Mr. Donziger “maybe the most corrupt in contemporary U.S. history”. Mr. Donziger has been locked up in his home for 567 days without trial when the longest sentence ever imposed on a lawyer convicted of contempt is 90 days of home confinement.

Mr. Donziger also was forced to post (via friends) an exorbitant $800,000 bond–higher than the bonds imposed on the four police officers who killed George Floyd (all of whom are free pending trial.) Mr. Donziger is also the only person in U.S history with no criminal record detained on a federal misdemeanor charge, according to his lawyers.

“The unethical behavior of Seward & Kissel’s Chevron-linked prosecutors opens the door to future cases in which judges give private law firms the authority to prosecute the critics of multinational corporations—without disclosing their ties to those same industries,” the law student letter said.

We, the undersigned law students, refuse to consider employment with the firm until it withdraws from its conflicted position as Chevron’s private prosecutor.

The Seward firm is known for its close ties to the oil and gas industry. One of its leading clients, Oaktree Capital, has two executives who have served on Chevron’s Board of Directors. Ethics expert Ellen Yaroshefsky submitted an affidavit calling on the firm to disqualify itself due to its financial ties to Chevron and Chevron-related entities in the oil industry.

Donziger has won wide support for his principled stand on behalf of his clients. Fifty-five Nobel Laureates have demanded his release and dismissal of the contempt case (here); 475 lawyers and 37 law associations around the world have protested his detention (here); and another 200 lawyers have filed a misconduct complaint against Judge Kapan for his “abusive targeting” of Mr. Donziger (here).

Last week, Amnesty International and 12 other prominent human rights groups sent a letter to incoming U.S. Attorney General Merrick Garland demanding a review of the Donziger contempt case and the removal of the Seward & Kissel law firm from its prosecutorial role. Attorney Marty Garbus also wrote a powerful memo explaining why he believes the contempt charges against Mr. Donziger have no valid legal basis.

“Seward and Kissel and other law firms should be put on notice that this campaign will happen repeatedly until unethical private prosecutions of any sort–but particularly those orchestrated by fossil fuel companies like Chevron–are brought to a complete halt,” said Matthew Burton, a third-year law student at Boston College Law School and a signatory.