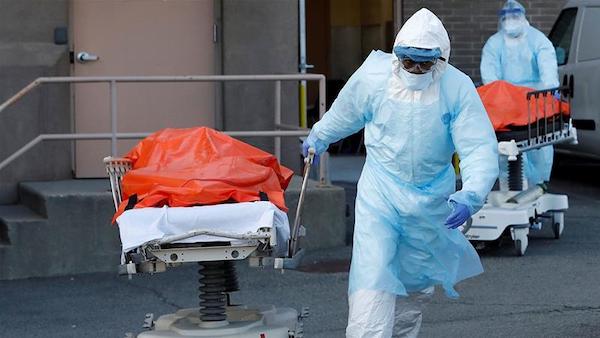 More people have died in the U.S. due to COVID-19 than any other country in the world.

With 4% of the world’s population, the U.S. has 20% of all COVID deaths and one of the highest rates of deaths per 100,000 residents, exceeded by only a few countries such as Belgium, the United Kingdom and Italy.

January became the deadliest month of the pandemic so far with an average of 3,000 people dying every day.

The U.S. has reported over 28 million cases to date, about 25% of all global infections.

After peaking at nearly 300,000 new cases in a single day on Jan. 8, the United States is now reporting about 70,000 new infections each day.

However, new variants of the virus threaten to disrupt the path to normalcy.

Officials have also warned that most of these cases are from a more transmissible variant first discovered in the U.K. called B.1.1.7, which could become the dominant variant in the United States by March.

Health officials are also worried about a variant first identified in South Africa called 501Y.V2, which has multiple mutations in the important “spike” protein that current vaccines are targeting.

About 15% of the U.S. population has received at least one vaccine dose so far and more than 63 million doses have been administered, according to the Centers for Disease Control and Prevention.

U.S. President Joe Biden said in early February that it would be difficult for the United States to reach herd immunity, at least 75% of the population inoculated, by the end of this summer.

This has led to a growing disparity among states on vaccination progress, including that Blacks and Hispanics are lagging in getting inoculations. In many parts of the country, long lines and hours of waiting was not an uncommon sight.

White House officials said last week that the country has a backlog of 6 million COVID-19 vaccine doses due to inclement weather that swept much of the United States.

For some, the numbers might just be numbers, meaningless to anyone untouched by the virus’s cruelest of consequences.

U.S. news outlets have tried to conjure the image through various comparisons.

From the death toll being akin to the loss of a major city like Atlanta or Sacramento, to being enough to instantly fill a cemetery the size of Arlington.

Others have made comparisons to the scale of life lost in the theatre of war.

The U.S. COVID-19 death toll over the past year has now surpassed the number of Americans killed on battlegrounds in both World Wars and the Vietnam War.

It is a race against time to vaccinate enough Americans before they spread out of control.

Life expectancy is dropping in U.S.

It was not until a year after the first reported case that the monthly death rate would peak.

One fifth of all U.S. COVID-19 deaths were recorded in the midst of a long, cold, January this year.

On average, 3,100 people died each day during the month. That is one every 28 seconds, a September 11-scale tragedy, every single day.

The ripple effect of the misery and loss has in recent days come into sharp focus.

The average life expectancy in the U.S. dropped by a full year in the first half of 2020–the largest drop since World War II. The main reason: Deaths from COVID-19.

And just like the disproportionate impact of the pandemic itself, it’s been split down racial lines.

The group that suffered the largest decline was non-Hispanic black males, whose life expectancy dropped by three years.

Hispanic males also saw a large decrease, with a decline of about 2.4 years.

Throughout the pandemic, black and Latino Americans have died from COVID-19 at twice the rate of white Americans.

It is a black mark against a country that prides itself on exceptionalism and is sure to go down in history as one of this nation’s darkest chapters.

While the milestone does come at a hopeful time for the country, with new infections and deaths down dramatically in the past few weeks, the next big challenge facing the country is fast-spreading variants of the virus.

Unfolding of this U.S. disaster

To truly understand how the U.S. got here, it needs rewinding.

When the invisible enemy was breaching American shores, the country was caught up in a turbulent election season and the daily unpredictability of the Trump presidency.

While top health officials saw the threat, the Trump administration played it down.

I remember the day the president stepped up to the podium to announce the U.S. would be banning travel from Europe on March 12. It felt like that was when the country sat up and realized this was serious.

But the virus was already here and had been circulating for months.

By and large, the nation as a whole was unaware and perhaps naive about the damage the pandemic would wreak upon its towns, cities and communities in every pocket of this vast country.

As the deputy editor at Foreign Policy, James Palmer, recently put it:

For too many Americans, disasters are things that happen to other people, not themselves.

Many Americans are simply not used to the idea that what is happening on the news could affect their day-to-day life.

No other country has counted this many deaths in the pandemic.

Plenty of Americans wore masks and stayed home, but many did not.

Despite the horrific numbers and a death rate sharply climbing around the Thanksgiving holiday in November 2020, millions still travelled against health advice.

Some conservative members of Congress went online to boast about mass gatherings they planned to hold in defiance of physical distancing guidelines.

The denial of basic scientific facts and the very presence of a deadly virus has extended right to the very end, even for some breathing their final moments.

South Dakota nurse Jodi Doering made national headlines in November when she spoke to CNN.

“People are still looking for something else and they want a magic answer, they don’t want to believe COVID is real. Their last dying words are: ‘this can’t be happening. It’s not real,’” she told national television.