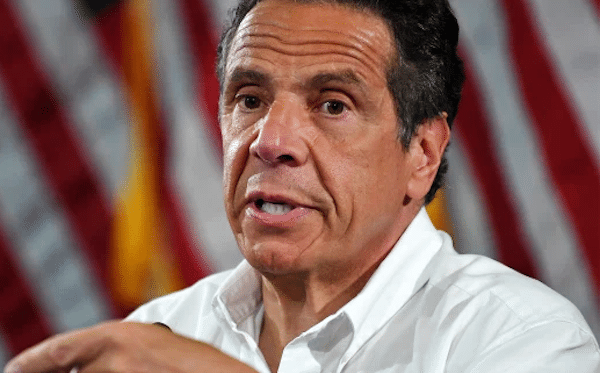 There is certainly a tad of glee in the right-wing media over multiple scandals surrounding New York Gov. Andrew Cuomo. Fox News media critic Howard Kurtz (3/7/21; The Wrap, 3/7/21), who spent years attacking the media for being too tough on the Trump administration (CNN, 1/23/18), lashed out at networks like CNN and MSNBC for coming late to both the sexual harassment allegations and nursing home scandal. He summed up centrist journalists’ supposed attitude: “‘Nothing to see here, let’s move right along, and hmm, I wonder what Donald Trump is up to.” The National Review (3/6/21) used the Cuomo scandals to paint a picture of a corrupt state ruined by Democratic governance.

Supporters of the Republican Party certainly have an interest in bringing Cuomo, perhaps the best-known Democratic governor, down a notch. Meanwhile, some liberals have reverted to their own conspiracy theories, imagining that Donald Trump is somehow concocting these scandals to his own benefit (Daily News, 3/9/21)—a fantasy we might call Cuo-Anon.

But the usually histrionic New York Post editorial board (3/7/21) actually had a counter-intuitive take on the Cuomo scandals that illuminates the complex politics. “Is Andrew Cuomo Too Weakened to Stop the Left From Destroying New York?” the headline declared—suggesting that the editorial writers counted themselves among the “moderate New Yorkers who once bought Cuomo’s argument that he’s their best hope for staving off left-wing lunacy.” 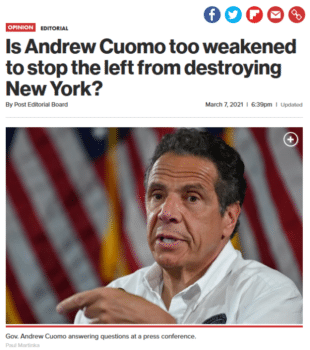 Far from gleeful at Gov. Andrew Cuomo’s scandals, the New York Post (3/7/21) seems distraught that the state is losing the “best hope for staving off left-wing lunacy.”

The Murdoch-owned paper pointed out that the story is unfolding as the governor maintains his dedication to austerity, while progressive and socialist lawmakers

want higher taxes and other burdens on business—likely triggering a rush to the Empire State’s exits now that the lockdowns have proved that it’s easy to work thousands of miles from Wall Street.

The Post (3/8/21) also gave room to E.J. McMahon of the right-wing Manhattan Institute, who worried about the governor losing political power in the face of “pressure from ‘tax the rich’ zealots.” Citing the conventional wisdom that New York’s governor is supposed to be a prudent executive who says no to the people’s representatives in the statehouse—“the governor is the only player in this game with the incentive to care about the long-term outlook”—he worried “whether Cuomo will continue to care much about the long term when he is looking more and more like a lame duck.”

Get past the pro-rich rhetoric, and there’s some clear political truth in here. Far too much of the media narrative around Cuomo is whether he is the liberal version of Trump, or if his scandals expose some sort of liberal hypocrisy. But these aren’t the right questions to be asking.

What the Post points out, rightly, is that while Cuomo, the son of former Gov. Mario Cuomo and brother of CNN’s Chris Cuomo, is a well-known figure in U.S. liberalism by familial association, his decade in office has been marked by resisting taxation of the wealthy and an adversarial stance against public sector labor unions. Ask any tenant organizer, Occupy Wall Street activist or member of the socialist caucus in the legislature, and they’ll tell you the story of a governor who has resisted any kind of legislation that would require new state spending.

The Post is letting slip that although the media tend to view the Cuomo scandals as a Democratic problem, the political and economic stakes here involve an aggressively center-right executive against a liberal legislature.

After all, this is the same governor who strongly supported the draconian Taylor Law, which forbids strikes by public employees, threatened public sector workers with layoffs if they did not accept wage freezes, sought to further privatize in-home care for the elderly and disabled and attempted to end the state’s fusion voting system in retribution against the labor-backed Working Families Party after it endorsed his primary opponent, Cynthia Nixon, in 2018.

The New York Daily News (6/3/19) reported that the governor’s “rocky relationship with organized labor has hit a few rough patches early in his third term as tensions boiled over following the breakdown of the Amazon deal, a bitter fight over campaign finance reform and overtime issues at the MTA.” Cuomo was also a huge backer of the controversial plan for a heavily subsidized headquarters for Amazon in Queens, which was ultimately quashed by progressive Democrats and labor activists. “[Cuomo’s] office honed in on the role of the Retail, Wholesale and Department Store Union (RWDSU), accusing the union of overplaying its hand in pushing the ecommerce giant to allow workers to organize,” the Daily News said.

In this sense, Cuomo has been the kind of anti-spending, pro-business executive that moderate Republicans dream about. Cuomo has relied on one of the state’s most powerful business sectors, real estate, for campaign support (New York Times, 1/28/10) and has relied on big business contributions in general (Rochester Democrat and Chronicle, 10/18/18).

That the right-wing Post editorial board fears that a weakened Cuomo would embolden an ascendant left clarifies how Cuomo has governed from the center and center right. Sometimes the Post, though rightly regarded as a sensationalist rag, can get the truth across better than the centrist corporate press.