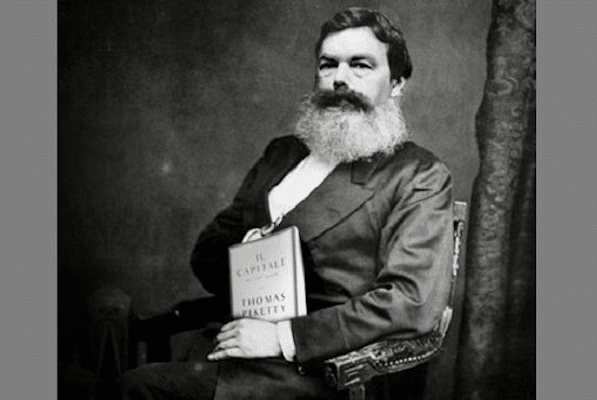 In his book Capital in the Twenty-First Century,(1) Thomas Piketty has gathered his data meticulously and provided a useful analysis of the unequal distribution of wealth and income, yet some of his definitions are somewhat confusing and even questionable. Consider, for instance, his definition of capital: “In all civilisations, capital has served two great economic functions: on the one hand to provide dwellings (that is to say, to produce “housing services,” the value of which is measured in terms of the rental value of the dwellings: this is the value of well-being of having a roof over one’s head as opposed to being outside); and, on the other hand, as a factor of production for producing other goods and services.” He continues: “Historically, the early forms of capitalistic accumulation seem to concern tools (from flint, etc.), agricultural infrastructure (fences, irrigation, draining, etc.), and rudimentary dwellings, before evolving into more sophisticated forms, such as industrial and professional capital and increasingly elaborate dwellings.(2) Piketty proposes a scenario that suggests capital has been present from the origins of humanity and that revenue from a savings account held by a limited-income retired person is the same as revenue derived from capital.

Capital according to Thomas Piketty

This major confusion is present in the heart of his analysis he develops in Capital in the Twenty-First Century. For Piketty, an apartment worth €80,000 or €2,000 on a savings account(3) may be defined as capital, in the same way as a factory or commercial premises worth €125 million. The ordinary citizen who owns an apartment, has some reserves in a savings account and a life insurance policy worth, say, €10,000 will readily agree with Piketty’s definition, which corresponds with those found in standard economic textbooks and repeated by their bank manager. However, they are wrong, because capital in our capitalist society is much more complex than these simple definitions. Capital is a social relationship that enables a minority (the richest 1%), to get richer by exploiting the labour of others (see below).

Yet when Piketty talks of a progressive tax on capital, he makes no distinction between the kind of “wealth” represented by a €1,000 savings account and the fortune of a Jeff Bezos, a Bill Gates or an Elon Musk.

The same confusion is to be found in his analysis of income: Piketty considers that the income from renting out an €80,000 apartment is a capital gain of the same kind as the income Mark Zuckerberg, the boss of Facebook, derives from his empire.

As far as wages are concerned, Piketty considers that all income declared as wages is wages, whether this means the €3 million salary package of the CEO of a banking group (an amount that is in fact revenue from capital and not a wage or salary(4)) or the €30,000 salary of a bank employee.

Capital according to Karl Marx

We should question the meaning Piketty gives to words like “capital” and define revenue from capital and revenue from labour differently. Piketty presents capital as something that exists in all civilisations and that has necessarily always existed. In this he is in tune with the political economy of the 18th and early 19th century, as found in the writings of Adam Smith in particular, before Karl Marx threw light on what Capital (and wages) really are and developed his critique of the political economy of his time.

Karl Marx has ironical comments on contemporary writers who, like Piketty does, considered the first silex tools to be the original form of capital or just capital: “By a wonderful feat of logical acumen, Colonel Torrens has discovered, in this stone of the savage the origin of capital. “In the first stone which he [the savage] flings at the wild animal he pursues, in the first stick that he seizes to strike down the fruit which hangs above his reach, we see the appropriation of one article for the purpose of aiding in the acquisition of another, and thus discover the origin of capital.” (R. Torrens: “An Essay on the Production of Wealth” &c., pp. 70-71.)»(5)

In his Capital, he states: “We know that the means of production and subsistence, while they remain the property of the immediate producer, are not capital. They become capital only under circumstances in which they serve at the same time as means of exploitation and subjection of the labourer.”(6) Marx explains that an artisan who owns his/her own tools and works for her/himself does not own capital and does not receive a wage. During the centuries that preceded the victory of the capitalist class over the old order, the overwhelming majority of producers worked for themselves, both in towns and in the country. Artisans organised into corporations and peasant families made up the majority of producers, who owned their tools of production, and in the countryside the majority of peasant families owned land, and in addition could make use of communal lands to feed their livestock or glean firewood. Between the end of the 15th century and the end of the 18th century in Western Europe, the developing capitalist class needed the support of the State to dispossess this mass of producers of their tools and/or their land(7) and force them to submit to becoming wage-workers in order to survive. The capitalist class needed to take organised action in order to impoverish and dispossess the working classes and thus force them to accept being wage-workers. That process did not take place all by itself. Karl Marx analyzes the methods that enabled the primitive accumulation of capital in a detailed and rigorous way. In Volume One of Capital, he reviews all the methods used to dispossess producers of the means of production, and thus of their means of subsistence.(8)

Marx draws an anecdote from a book by Edward Gibbon Wakefield (20 March 1796–16 May 1862) to illustrate the idea: “Mr. Peel, he moans, took with him from England to Swan River, West Australia, means of subsistence and of production to the amount of £50,000. Mr. Peel had the foresight to bring with him, besides, 300 persons of the working class, men, women, and children. Once arrived at his destination, ’Mr. Peel was left without a servant to make his bed or fetch him water from the river.’”(9) Marx comments ironically: “Unhappy Mr. Peel who provided for everything except the export of English modes of production to Swan River!” This is because in Australia at the time there was a profusion of land available and the workers were able to find a patch of land on which to set themselves up. Marx, through his comment regarding this fiasco experienced by the capitalist Peel, wants to show that as long as producers have access to the means of subsistence–in this case land—, they are not forced to submit to serving a capitalist.(10)

property in money, means of subsistence, machines, and other means of production, does not as yet stamp a man as a capitalist if there be wanting the correlative–the wage-worker, the other man who is compelled to sell himself of his own free will.

We should also point out that Marx, in the same section of Capital dedicated to primitive accumulation, vehemently denounced the extermination or forcible subjugation of the indigenous peoples of North America and the other regions that fell victim to colonial domination and the primitive accumulation of capital:

The discovery of gold and silver in America, the extirpation, enslavement and entombment in mines of the aboriginal population, the beginning of the conquest and looting of the East Indies, the turning of Africa into a warren for the commercial hunting of black-skins, signalized the rosy dawn of the era of capitalist production. 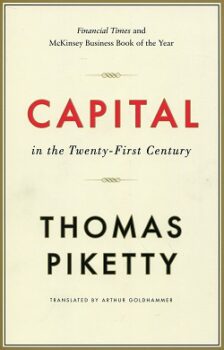 To return to Piketty, the definition of capital he gives introduces complete confusion. Let’s look at his definition again: “In all civilisations, capital has served two great economic functions: on the one hand to provide dwellings (…) and, on the other hand, as a factor of production for producing other goods and services.” So, for Piketty, Capital has existed in all civilisations; he goes all the way back to prehistory when he writes: “Historically, the early forms of capitalistic accumulation(11) seem to concern tools (from flint, etc.) (…) and rudimentary dwellings, before evolving into more sophisticated forms, such as industrial and professional capital and increasingly elaborate dwellings.“ For Piketty, a prehistoric flint tool, a cave, and a computer assembly plant are all capital. If we believe him, “capitalistic” [sic] accumulation goes back as far as the first assembly of a few pieces of flint that had been chipped and shaped. That definition throws no light on the historic specificity of capital, its genesis, how it is reproduced and accumulated, to which class it belongs, or the social and property relations to which it corresponds. The list of examples of capital Thomas Piketty gives resembles a supermarket catalogue; in a way it’s an inventory like the one in Jacques Prévert’s poem”Inventory“… with only the raccoons missing.(12)

Speaking of capitalist accumulation today, Piketty limits the discussion almost exclusively to the role of inheritance and fiscal policies that are favourable to capitalists; but in reality these factors, though they play a tangible role in transmitting and strengthening capital, are not what create it. Historically, for the capital held by the capitalist to begin a process of enormous accumulation, it was necessary to forcibly dispossess producers of their tools and their means of subsistence and exploit their labour power. The accumulation of capital as it continues today requires the continuing exploitation of working people and of Nature. Capital plays no useful role for society; on the contrary, continuing the accumulation of capital and the activities that generate it is literally deadly. Piketty’s failure to acknowledge that leads him to make a statement such as this:

If capital plays a useful role in the production process it is natural that it earns a return.(13)

Piketty’s confusion is undoubtedly the result of his fundamental convictions:

I am not interested in denouncing inequalities or capitalism as such (…) social inequalities are not a problem in themselves if they may be justified, that is to say for the common good. (…)(14)

My critique of Piketty’s definitions in no way minimises the interest of the monumental portrait his research has drawn of the wealth and income inequalities that have developed over the last two centuries. And, putting aside undeniable fundamental disagreements regarding the notion of capital, it is important, if anti-neoliberal fiscal reform is to be achieved, that we endeavour to bring together a broad spectrum of movements and individuals ranging from Thomas Piketty to movements of the anticapitalist Left. And if it is also possible to come together to demand cancellation of the public debts held by the European Central Bank (for a total amount of over 2,500 billion euros), it must be done. I do not regret having co-signed the call for the cancellation of sovereign debts held by the ECB(15) in February 2021 along with Thomas Piketty. But like the other members of the CADTM who signed that text, I consider that more must be done–beginning, for example, with levying a large Covid tax on wealthy individuals and major corporations. The CADTM feels that cancellation of public debts must be accompanied by a series of anticapitalist measures, and it is not certain that Thomas Piketty would support all of them.

Thanks to Anne-Sophie Bouvy, Christine Pagnoulle, Brigitte Ponet, Claude Quémar and Patrick Saurin for their readings.