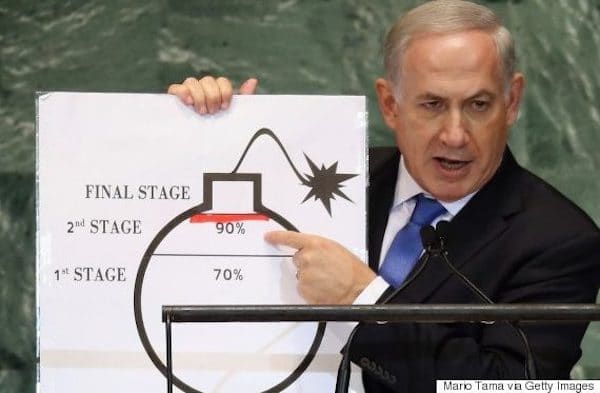 NETANYAHU POINTS TO A DRAWING OF A BOMB IN WARNING OF IRAN’S THREAT, IN AN ADDRESS TO THE UNITED NATIONS GENERAL ASSEMBLY ON SEPTEMBER 27, 2012 IN NEW YORK. (PHOTO BY MARIO TAMA/GETTY IMAGES)

Israel has accused Iran of doing many nefarious things. But the historical record shows that whatever Israel accuses Iran of, it is likely that Israel is already doing it.

For example, Israel has repeatedly accused Iran of destabilizing the region by malignantly spreading across the region and forming alliances and exercising influence in Syria, Iraq and Lebanon.

But Israel is spreading across the region by forming alliances and exercising influence across the region. With varying degrees of formality and publicity, Israel has expanded its network and formed alliances with Saudi Arabia, the United Arab Emirates, Bahrain, Sudan and Morocco. And this Israeli spread has been destabilizing both in terms of increasing weapons in the region and legitimizing and solidifying occupations.

The agreement between Israel and the UAE meant F-35 fighter jets, Reaper drones and EA-18G Growler jets that are capable of jamming enemy air defenses for the UAE and a large weapons package for Israel in compensation, potentially including combat helicopters, advanced communications satellites, bunker buster bombs, F-35s, KC-46A tanker aircrafts that are capable of refueling many aircrafts simultaneously and V-22 aircrafts that can transform form helicopter to airplane.

The agreements have also led to the solidifying of occupations in the region. And it is not only the solidifying of the Palestinian occupation. In order to extract an agreement from Morocco, the price was U.S. recognition of Morocco’s sovereignty over Western Sahara: an occupation that is illegal under international law. Both the UN and the International Court of Justice have ruled in favor of Western Sahara’s right to self governance.

Israel is also reportedly planning to lobby the U.S. not to pressure Saudi Arabia, Egypt and the UAE over human rights issues because of the value Israel places on these alliances in confronting Iran. Israeli officials reportedly want to remind Washington that the agreements they have signed in the region should be prioritized over concerns about human rights.

Spreading its influence across the region sounds a lot like what Israel is accusing Iran of. And Israel’s spread has been destabilizing in terms of the proliferation of arms, the legitimizing of occupations and the acceptance of human rights abuses.

But Israel has a distasteful history of using proxy forces going back at least as early as the proxy use of the Phalange militia in Lebanon. Not wanting to be seen sending Israeli soldiers into the Palestinian refugee camps, Israel used its proxy Christian militia. According to Patrick Tyler, in A World of Trouble, the Phalange militia developed “with covert assistance from Israel.” In September 1982, the Israeli proxy Phalange militia slaughtered hundreds, and perhaps thousands, of Palestinian refugees in the Sabra and Shatila refugee camps. Israel admits to 700 people massacred; the Palestinians claim 2,750. In Balfour’s Shadow, David Cronin places the number at between 800 and 3,500.

Israel accuses Iran of using proxy forces. But Israeli history demonstrates the well documented use of proxy forces to carry out some of its most illegal work.

Israel has forcefully tried to characterize Iran as a leading state sponsor of terrorism.

But Israel has recently aligned itself with the most barbarous terrorists. Israel has allied itself with the Islamic State and al-Nusra. In September 2013, Michael Oren, the Israeli Ambassador to the U.S.  said, “We always wanted Bashar Assad to go, we always preferred the bad guys who weren’t backed by Iran to the bad guys who were backed by Iran.” Oren told the Jerusalem Post that “This was the case . . . even if the other ‘bad guys’ were affiliated with al-Qaeda.” Nearly a year later, in June 2014, Oren would repeat Israel’s position of preferring the Islamic State and al-Nusra over Assad: “From Israel’s perspective, if there’s got to be an evil that’s got to prevail, let the Sunni evil prevail.” A year and a half later, Defense Minister Moshe Yalon would essentially reiterate this firm Israeli preference.

And Israel didn’t just root for the Islamic State, it aided it. Israel has repeatedly bombed Syrian targets, and UN observers in the Golan Heights have reported witnessing cooperation between Israel and Syrian rebels. Netanyahu has also revealed that Israel has hit Hezbollah forces fighting against the Islamic State and al-Qaeda in Syria dozens of times. And it has been exposed that Israel also provided funding, food and fuel to Syrian rebels fighting Assad.

In The Management of Savagery, Max Blumenthal says that “ISIS found a defender in Israel.” He reports that the director of “the Likud Party-linked Begin-Sadat Center for Strategic Studies” advocated for pursuing the “weakening of Islamic State, but not its destruction.” They called ISIS a “useful tool.” There are reports of coordination and communication between Israel and al-Nusra, including Israel providing maps.

So, Israel is doing exactly what it accuses Iran of doing.

It is well known that Israel has a nuclear weapons program. A leaked email written by Colin Powell suggests that the U.S. estimates Israel’s arsenal at 200 nuclear weapons.

Back in 2019, Iran was blamed for two limpet mine attacks on ships. Israel has also blamed Iran for a recent explosion on the Israeli cargo ship MV Helios Ray. Iran has denied responsibility for the attack.

But it looks like Israel has been very busy blowing up Iranian ships. The Wall Street Journal has shockingly reported that, since late 2019, Israel has attacked at least a dozen ships headed for Syria and carrying Iranian oil. Israel has attacked Iranian vessels or vessels carrying Iranian oil with weapons that included mines. At least some of the Israeli attacks have been carried out with limpet mines: exactly like the attacks Iran is accused of. The Wall Street Journal reports that three of the Israeli strikes took place in 2019 and six more took place in 2020.