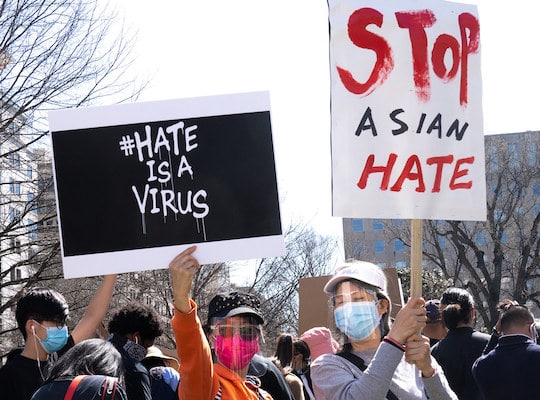 I’ve been watching the outpouring of support for people of Chinese and Asian descent suddenly flow from all corners of our mainstream media and political class. Seems everyone stands with Asians (however you define that term) now. Even Meghan McCain, the nepotistic brat who recently went off about the “Chinese virus” and whose dad was a lifelong unrepentant hater of “the gooks” he had slaughtered from his American jet, stands with Asians now. It’s all very nice and civilized.

I condemn the reprehensible violence and vitriol that has been targeted towards the Asian-American community. There is no doubt Donald Trump’s racist rhetoric fueled many of these attacks and I apologize for any past comments that aided that agenda.

The ramping up of attacks on Asian people in America shouldn’t really come as a surprise to anyone—not in our current cultural climate where the Chinese have been set up as a sneaky, inscrutable civilizational threat to America and Western Democracy, and where everyone seems to agree that China is basically Nazi Germany and must be stopped before it enslaves the world. You can’t expect the politics of our empire-in-decline not to blowback and influence things at home—especially if “home” has a long and rich history of anti-Chinese and anti-Asian bigotry and nativist paranoia.

What is find slightly surprising, though, is how little attention America’s imperial anti-China campaign gets. Looking at mainstream reporting from the last few weeks on the the rise of anti-Asian hate crimes, I can’t find any reference to it. The widely praised John Oliver segment on it avoided the issue. Even the official website of Stop APPI Hate, the org that’s been getting the most media attention on this issue, is silent on it. Sure, there’s a lot of talk about Trump and his “China Virus” slurs, which makes it seem like Trumpists are the only ones to blame. But no one in the mainstream is talking about America’s larger anti-China imperial campaign—a bipartisan War With China panic that’s being whipped up by the respectable liberal center as much as the Trumpist/Bannonist/Cottonist Right.

So our mainstream media suddenly discovered that Asian hate crimes are on the rise, yet they can’t make the connection that they are to blame for it. And a big portion of what passes for the left here in America has been roped into the War With China campaign, as well. So…

It’s obvious you can’t tackle the rise in anti-Asian racism without addressing America’s imperial politics and the bigoted domestic propaganda that this politics produces. The question I have is this: Can we expect people of Asian and Chinese descent to unite in a broad front against American imperialism? I ask, but I’m pretty sure the answer is a big no. America is a nation of weaponized immigrants. And aside from a few small pockets, my weaponized immigrant peers mostly support American imperialism. And even if they’re not actively supportive, they’re passively so—they’ll never stick their necks out and go against the political mainstream.