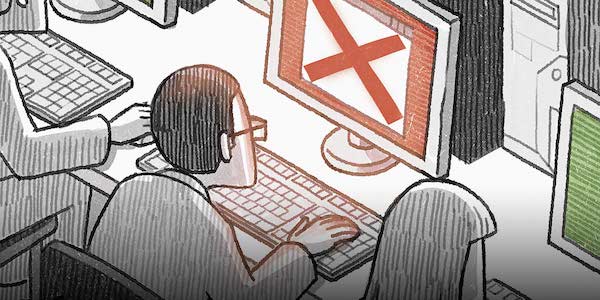 YYeTs.com had a prolific output: The group translated and disseminated video files of countless foreign films and TV series, and its sudden disappearance caused an uproar on the Chinese internet, despite the seemingly clear-cut facts of the case. For netizens, the loss of YYeTs.com was about more than just the rights and wrongs of a single group of people. The collective was a symbol of China’s long, complicated history of content piracy, and the news of its demise had several generations of Chinese feeling nostalgic for a simpler era of widely disseminated, easy-to-access, and largely free content.

Western accounts of Chinese piracy often become bogged down in its inherent contradictions. On the one hand, piracy is portrayed as a reflection of Chinese cinephiles’ passion for and interest in Western films and culture, as well as their desire to get around the restrictions that are sometimes placed on Western movies and TV series. On the other hand, the work done by pirates represents a huge loss for Hollywood and the Western film industry.

In fact, if we trace Chinese film piracy back to its origins, we can see that perceptions of it in both China and the West have shifted over time. After the advent of “reform and opening-up” in the late 1970s, China set previous grudges aside and sought reconciliation with the West. In the early ’80s, erstwhile geopolitical rivals like the United States and Japan were allowed to organize weeklong film festivals open to the public.

At the time, Western governments thought they could resolve their ideological conflicts with China through soft power. For this reason, they decided to provide a number of films to China free of charge. For a long time, China’s state-run China Central Television channel was allowed to broadcast many American films for free, for example. And throughout the 1980s, mainland theaters could screen subtitled European and American films largely without fear of prosecution.

Beginning in the 1990s, however, the West gradually lost its enthusiasm for providing free content, and instead started hounding the Chinese government to do something about the rising tide of piracy. At first, many Chinese cinephiles were confused by the West’s sudden change in attitude: In the past, Western countries had actively sought out ways to let Chinese watch their movies for free. Why had they suddenly decided that pirating was such a big deal?

Well, for one thing, they’d started to realize that the growing influence of Western culture on Chinese people was not producing the political results the countries had expected. For another, a developing China was increasingly seen as an important market, rather than a backwater.

By that point, however, piracy was already a widespread phenomenon. In the 1980s, pirating was mainly limited to re-recording and sharing videotapes among small circles of cinephiles. In the 1990s, as video compact discs grew in popularity, the costs of pirating fell even as the products’ image quality improved. Underground operations in coastal areas churned out pirated copies, mostly duplicated from goods brought over from Hong Kong or Taiwan. In Shenzhen, near the Hong Kong border, underground operators set up satellite antennas to record European and American films being broadcast on Hong Kong TV, and then ripped them on to VCDs or DVDs for the cost of a few cents each.

These pirated products included many films and shows not accessible in mainland cinemas or TV screens. Many Chinese cinephiles have fond memories of foraging for disks at their local music and video store. A more robust film community began to emerge, often centered around grassroots film groups in China’s big cities. These groups organized events in cafés and other spaces where film buffs could watch pirated films and study filmmaking together. 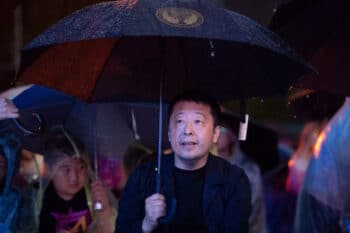 This community would spawn a generation of innovative filmmakers. Growing up in the 1980s, one of China’s most celebrated directors, Jia Zhangke, spent virtually every day watching smuggled and pirated films at an underground projection store. In his corner of the northern coal-mining province of Shanxi, he knew by sight the fashionably coiffed man with a black briefcase whose appearance always heralded the arrival of new films in town. His memories of the projection shop and the movies he saw there would have a huge influence on his later films, many of which would themselves only be available in China pirated.

There’s a case to be made that, without piracy nurturing a rich and diverse culture of cinephiles, today’s booming Chinese film market–the world’s largest–might be considerably more impoverished. Filmmakers like Wang Xiaoshuai, Guan Hu, and Jia all grew up on pirated content.

In the 2000s–at the behest of Western governments, coupled with their own reasons–Chinese urban officials began cracking down on DVD piracy. They rounded up hawkers on the streets, closed down video stores, and raided pirate operations. In particularly large busts, the government could confiscate literal tons of VCDs or DVDs. At its peak in 2005, the Chinese government reported a haul of over 105 million pirated products, over half of which were audio or video goods.

These crackdowns coalesced into a “national strategy” of increasing intellectual property protections in 2008. Around the same time, piracy had largely moved online, and underground piracy operations became increasingly hard to locate. Meanwhile, as users began passing around pirated movies and TV shows through torrents and peer-to-peer servers, demand rose for higher-quality subtitles.

In response, subtitle collectives, some with hundreds of volunteers, emerged to become a key conduit for piracy in China. Subtitle groups offered far more accurate translations, as they were motivated not by a desire to turn a quick profit, but by their passion for film and TV. Some even went out of their way to do research and add annotations. Many were international students. Chinese students abroad would rip the hottest American dramas and send them, along with their English subtitles, to their counterparts back in China. There, volunteers would quickly translate them into Chinese. Working in teams, a typical episode might take six hours to translate and upload. Accounting for the time difference, this means that an episode broadcast at 9 p.m. Eastern Standard Time would be available in China the following afternoon.

More broadly, now might be the time to reappraise our notions of intellectual property. The current property rights paradigm dates to the Industrial Revolution and focuses on material assets and exclusivity: What you buy becomes yours and yours alone. That approach is ill-suited to the current digital world, in which the economy is largely dominated by immaterial products.

One of the defining characteristics of the knowledge economy is reproducibility. The more people accessing a piece of knowledge–whether by visiting a webpage or clicking a link–the greater its influence, and thus its value. This is at odds with the logic of the current property rights paradigm, as extending copyright or patent protections to immaterial products like knowledge limits their reproducibility, while allowing the exclusive owner of these rights to profit from their scarcity, and not their success.

The debate in China over whether amateur subtitle groups deserve to be shut down originates in this contradiction between the value-as-scarcity paradigm enshrined in our current property rights regime, and the belief that sharing knowledge can create greater value. The history of this debate reflects a desire to overcome all the various obstacles that limit the transmission of knowledge. For many Chinese, the gray zones on the periphery of intellectual property law have long been a source of color in their lives. The piracy scene embodied by YYeTs.com might be on its last legs, but the rich cinephile culture it helped stimulate, the intercultural discussions and exchanges it sparked, and the up-and-coming creators it inspired aren’t going anywhere.