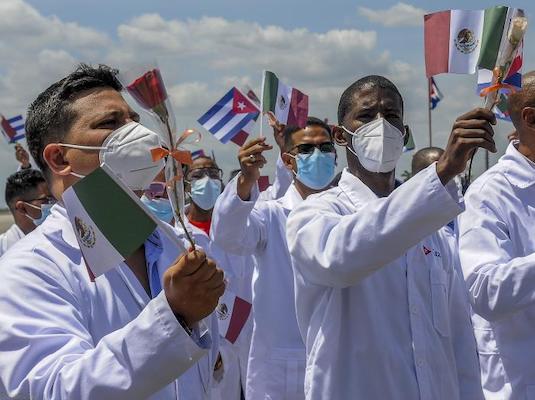 The President of the Republic of Cuba, Miguel Díaz-Canel Bermúdez, in a virtual message, welcomed to the homeland the 160 members of the Cuban brigade collaborating in Mexico’s fight against the COVID-19 pandemic.

A third group of 124 doctors from the Henry Reeve International Contingent of Doctors Specialized in Disasters and Serious Epidemics, who traveled to Mexico last December to face the serious health emergency created by the virus in that country, returned to Cuba on Monday.

Upon their arrival at José Martí International Airport, the President praised their work, which was recognized by Mexico’s ministries of Health and National Defense, as well as the Mexico City government, for their outstanding work during the three months of service. 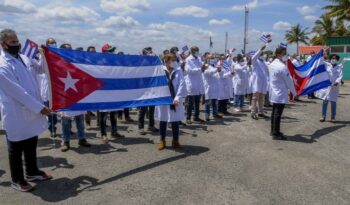 The group assisted a total of 408 patients suspected or confirmed of a SARS-COV-2 infection, of which 295 were admitted to the hospital and 263 discharged. They performed 64,707 nursing procedures and interventions, saved 216 lives, and provided rehabilitation to 249 patients, also supporting prevention efforts with the presentation of 1,586 biosafety trainings sessions.

Felipe Águila Reyes, who was also a member of the first large brigade to serve in Mexico in 2020,and had the pleasure of sharing the two missions with his doctor son, highlighted the gestures of gratitude the group received from the patients they treated, many of whom were saved by the Cubans’ interventions. He pointed out that, when the brigade arrived in Mexico, the mortality rate in the hospital where they were placed was 30 deaths per day, and that, by the end of the mission, this indicator was reduced to zero.

Dr. Carlos Santana Tamayo, head of the brigade, acknowledged the sacrifice and dedication of its members, who remained throughout their stay working in the red zone, and reaffirmed their willingness to continue fighting the pandemic wherever they are needed.