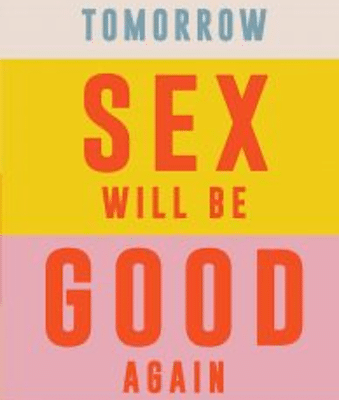 Katherine Angel
Tomorrow Sex Will Be Good Again: Women and Desire in the Age of Consent
Verso, London 2021.

I remember vividly the nightlife-Zeitgeist of the early 2010’s, when I was an undergraduate student: a blasé form of sex-positive feminism infiltrated the heads and the bodies (yes, literally) of young heterosexual women. Fuck your way to self-emancipation; be that ideological virgin who claims to be a whore (but isn’t). The sexual morality of that time: the last offspring of withering ‘Samanthaism’.

Now, ten years later, it is almost as if Saturn had launched a series of returns. In the wake of the events on Clapham Common in London, many of my friends, notably women in their late 20s, epiphanically opened up about sexual harassment, about having been spiked, stealthed, or worse–not yesterday, not last week, not last year; but almost a decade ago, in those sex-positive days. Hermeneutical gaps first had to be closed.

Katherine Angel’s intervention into post-feminist discourse fits the script of recent events and sits at what’s hopefully the tail end of post-feminist discourse, otherwise known as ‘the sex wars’. Tomorrow Sex Will Be Good Again urges us to rethink the notion of consent as the be-all-end-all of ‘good’ sexual encounter. Consent-culture has told us that as long as consent isn’t violated, sex is empowering, in the best case emancipatory, but in any case, legal, unharmful, and almost always, in fact by definition, ‘good’.

Consent has to be problematised. For many reasons. Consent is a slippery notion. That doesn’t mean that consent must altogether vanish from our sexual ethics. Angel’s argument is that we must consider consent as the absolute baseline, something that is prior to a much needed, more elaborate sexual ethics. Consent is a legal concept, after all, not an ethical notion, and itself riddled with uncertainties. The ethics of sex goes beyond mechanical questions of consent. In other words, consent (and it’s non-violation) is necessary but not sufficient for sex to be ‘good’ (in a robust ethical sense).

Consent requires a speech-act of some sort. The debates about whether consent must be an affirmative speech-act, whether it has to be (as the Teen Vogue propagated, sounding somewhat pornographically) ‘enthusiastic’ for it to count as genuine consent-giving (6), are vexed, confused and permeated by diverging incentives, both from inside and outside feminist discourse. How loud does one have to give consent? Is a cautious ‘no’ enough to express dissent? Does silence mean consent? Whose consent is meaningful? Polemically put, can we demand men (i.e. those who occupy a man’s position in power relations) to ‘mind-read’ women? Do women ‘have to push the bear away’ for dissent to be expressed clearly?

Angel does excellent work tracing how the academic concept of consent sneaked into popular culture. Whether a notion as slippery as consent can reliably keep apart rape or assault from non-coercive sex is difficult to say. As Angel stresses, we must accept and take into account the context-dependency, the fluidity, the always-being-in-motion of sexuality, and therefore of the context-dependency, the fluidity, the always-being-in-motion of consent.

What is more, if consent presupposes a speech-act of some sort, and speech-acts presuppose epistemic clarity, i.e. absolute self-knowledge–mastering the gnōthi seauton (an unobtainable goal, as Angel emphasises repeatedly)–then consent presupposes epistemic clarity. Consent-culture makes it the duty of women (or rather those who play the women-part in power relations) to both know themselves and their partners. Women can’t afford to be passive and ‘just wait and see how far the other person will go’. This goes back to a ‘foundational, axiomatic value of feminism’, says Angel (Ibid), which is speaking the truth.

The truth, i.e. epistemic clarity, is however usually buried underneath thick layers of ideological obfuscation. ‘Progressive thought has long cast sexuality and pleasure as stand-ins for emancipation and liberation. It was precisely this that philosopher Michel Foucault was critiquing in 1976, in The Will to Knowledge, when he wrote that “tomorrow sex will be good again”. He was paraphrasing, sardonically, the stance of the counter-culture sexual liberationists […], all those who believed that, in order to be liberated from the past’s moralizing clutches, from a repressive Victorian past, we must finally tell the truth about sexuality.’ (8)

The genealogical mastery of Foucault is there to tell us: ‘Speech and truth-telling are not inherently emancipatory, and neither speech nor silence is inherently liberating or oppressive’ (9). But the problem with consent as the be-all-end-all of ‘good’ sex lies deeper. We must not think, Foucault wrote, that ‘by saying yes to sex one says no to power’ (Ibid). That, to me, is the central and most valuable point of Angel’s intervention.

Angel cites Michaela Coel’s I May Destroy You, a story in which alongside a women’s own sexual curiosity–which is blurred into an act of consent-giving–there is men ‘manoeuvring her into place, through a subtle, ambiguous form of deception’ (11), which leaves her violated despite her arguably having given consent. Consent doesn’t preclude instrumentalization.

This taps into the above, the assumption that physical pleasure-seeking equals self-emancipation. ‘The swelling of affirmative consent into something more ambitious: into desire, pleasure, enthusiasm, positivity’ (30), that’s where it becomes ideological. In other words, this taps into the ideology of sex-positivity.

The sex-positivity movement believes that wanting to (or not wanting to) engage in any and all kinds of sexual activity is okay and serves women’s emancipation as long there are provisions for consent and safety. The argument in sex-positivity is that the decisions women make around their sexuality are inherently emancipatory; it’s exercising choice, qua woman, in a world which denies it.

That’s all great, in theory. In practice, however, before gender equality, and, by extension, as long as we haven’t dislodged men’s orgasm as the sole purpose of heterosexual intercourse, sex-positivism is nothing but an ideological sham. Sex-positivity in practice failed to understand political and material effects of pro-sexuality. Sex–critical feminists often describe sex-positive feminism as a movement that is doing patriarchy’s work for it.

By the same logic, assault becomes a ‘youthful mis-adventure’ that provides opportunity for ‘growth’, as people like Katie Roiphe would have it. This emphasises the idea of the ‘survivor’ who finally, by the post-feminist magic of turning harm into opportunity for ‘growth’, has the chance to become a heroin. That’s tactlessly degrading those who didn’t survive, as far as this reviewer is concerned.

Sex-positive feminism secretly assumes all men to be feminists. That’s wishful thinking. It is uninformed to think that we are (any of us) above the oppressive messages that we’ve been handed down from Victorian times. Sexual encounters in which women are male-pleasure-centric tropes, in which consent is violated, don’t challenge the patriarchal status quo or allow women to freely, openly and enthusiastically engage in sexual activity. They are, however, the only available form of sexual interaction a patriarchal world can ever permit. This chimes with Adorno: wrong life cannot be lived rightly.

Don’t get me wrong, this is not an apology. Patriarchal norms are disgusting. It is just that we might doubt if patriarchy is something that can simply be regulated, talked, imagined or, well, shagged out of existence. ‘It is crucial to maintain the distinction between consent and enthusiasm, precisely so that we can describe what is going on […] in dynamics of unequal power’, says Angel (31).

Despite its problems, we are not urged to drop the notion of consent. Affirmative consent is ‘the least bad standard for sexual assault law, compared to force, resistance or non-consent standards’, yet consent can only be ‘the base minimum’ (27). Angel invites us to assert a break with ‘post-feminism and a confidence feminism where weakness or insecurity must be avoided at all cost; where self-expression and poses of sassy confidence are imperative, and where individual self-work will ward off sexual violence.’ (37). The binary between emancipation and self-protection, voiced repeatedly by people like Laura Kipnis, is a false binary. Once we have broken up this harmful binary, women will have chance to embrace their vulnerability and fold it into our ethics of sex, which sits on top the wanting notion of consent.

All this is arguably in tension with letting ‘the fear of violence, and the need to manage risks, determine our thinking so profoundly that we attempt to organize our sexuality around it–to define sexuality in such a way that it will supposedly protect us from violence’ (92). This tension is no reason to brush away the importance of embracing vulnerability, Angel thinks. Embracing vulnerability will not invent a sexuality that admits of no abuse, but neither does denying one’s vulnerability. The onus must be on others not to abuse this vulnerability.

On how we get there, practically, Angel is unexpectedly silent. Not being sold yet another receipt for the cookshops of the future is hardly grounds for disappointment, though. Avowing its own vulnerability vis-à-vis the daunting and perhaps impossible task of prescribing a sexual ethics is one of the books greatest merits.

The other side of vulnerability, I’d suggest, is trust. Angel touches upon the issue of trust only briefly despite everything pointing towards an ethics of trust. Thus, more could have been said about it. Sex, when it’s truly human, when it is ‘good’, she says, is ‘an exercise in mutual trust and negotiation of fear […] safe and risky in just the right degrees’, because it will never be devoid of power-imbalances (100). This demands of us accepting our vulnerability, going beyond consent, and to be ready to say: ‘I trust you not to hurt me; I trust you not to abuse your power’ (104).

Adrian Kreutz is a DPhil Candidate in Political Theory at New College, University of Oxford.