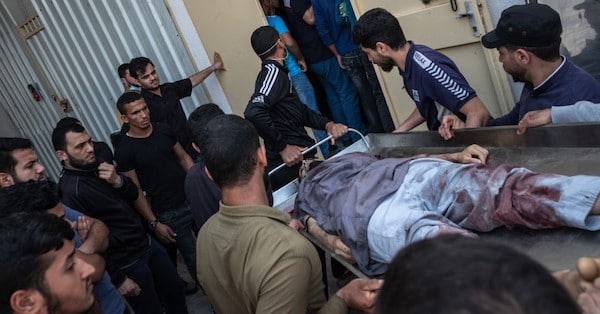 The body of a Palestinian man named Ahmed Al-Shenbari, who was killed during an Israeli raid on Beit Hanoun City, is taken to a mortuary on May 11, 2021 in Gaza. (Photo: Fatima Shbair via Getty Images)

As Israel continues its deadly assault on Palestinians throughout the occupied territories, a new analysis released Monday night shows that if congressional lawmakers in the U.S. approve the federal budget unveiled last month by President Joe Biden, the nation would give $1.3 billion more to the Israeli military than to the global climate response.

Although Biden has yet to release his official budget request for FY2022, he shared a preview, which was heavily criticized by progressives.

‘Fully funds U.S. commitments to… Israel’ includes giving the apartheid state $3.8 billion in annual military aid—$3.3 billion in ‘base’ bilateral security assistance plus another $500 million for missile defense systems—as outlined [in] the 10-year MOU the Obama-Biden administration reached with Israel in 2016.

Semler wrote that “per the Paris accord (and science), U.S. financial contributions to the global climate response should be orders of magnitude higher.”

Basav Sen, Climate Justice Project director at the Institute for Policy Studies (IPS), recently told Common Dreams that Biden’s pledge to cut U.S. greenhouse gas emissions in half by the end of this decade “is far from enough,” and encouraged the administration to “commit to paying our fair share for climate mitigation and adaptation in the Global South,” calling current commitments “woefully insufficient.”

“This isn’t charity, this is responsibility,” he explained.

As the world’s largest cumulative greenhouse gas polluter, we owe this to Global South countries who are facing serious consequences of climate change even though they’ve contributed so little to its causes.

According to a recent analysis of “fair share” climate policies conducted by Friends of the Earth, ActionAid, and the Sunrise Movement, the U.S. should reduce its carbon pollution by 70% compared to 2005 levels by 2030, contribute at least $8 billion to the United Nations Green Climate Fund, and provide up to $3 trillion for green economic recovery and no-strings-attached debt relief in impoverished countries.

U.S. military aid to Israel should be zero.

Two weeks ago, Human Rights Watch released a report, based on over two years of research and documentation, that says the Israeli government’s systematic oppression of Palestinians across Israel and the occupied territories amounts to crimes of apartheid and persecution.

Progressives in recent days have denounced the Biden administration for refusing to condemn Israel’s deadly airstrikes on Gaza and for failing to hold Israel accountable after its security forces invaded the Al-Aqsa Mosque compound to attack peaceful worshipers, which was part of a broader assault on Palestinians who are protesting settlers’ attempts to expel Palestinians from the Sheikh Jarrah neighborhood in occupied East Jerusalem.

“That Biden is prepared to fail so spectacularly on both [mitigating the climate emergency and opposing potential war crimes] warrants a unified response from the Congressional Progressive Caucus about what they plan to do once Biden drops his official budget request,” Semler added.

Lindsay Koshgarian, the program director of the National Priorities Project at IPS, toldCommon Dreams on Tuesday that “the sum of $2.5 billion in international climate aid, compared to more than $3 billion in military aid to a single country, would be laughable if it weren’t so dangerous.”

“These are the budget priorities of the past,” Koshgarian added.

There’s an opportunity right now for the U.S. to put its money where its mouth is. Can we invest more to save the world than we invest in arming it? Can we value human rights enough that we restrict our dollars from subsidizing human rights abuses like the system of apartheid and forced evictions happening today in Israel?