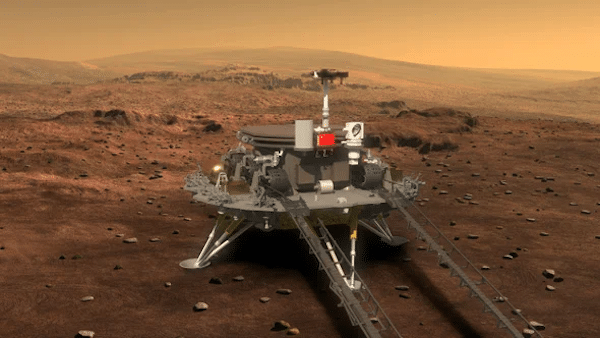 And then there were two: today China says it safely landed a spacecraft on Mars—for the first time in its history and in its first attempt, becoming the only other nation besides the U.S. to achieve such a feat. Its Zhurong rover, named after a god of fire from Chinese folklore, successfully touched down in Utopia Planitia around 7:11 P.M. EST as part of the Tianwen-1 mission, according to the China National Space Administration. Soon the rover should drive down the ramp of its landing platform, ready to explore its unearthly surroundings. If there was any doubt about China’s spacefaring prowess, it has been dispelled now that the nation has added interplanetary landings as a coveted notch on its belt “Mars is hard,” says Roger Launius, NASA’s former chief historian.

This is a really big deal.

Tianwen-1 was launched in July 2020 as part of a summer Martian armada that also included launches of NASA’s Perseverance rover and the United Arab Emirates’ Hope orbiter. All three missions arrived at Mars in February. But while Perseverance descended straight to the surface, Tianwen-1 instead entered an elliptical orbit around the planet to give its scientists a god’s-eye view for scouting out their planned landing site in Utopia Planitia, an immense impact basin on Mars. “China does not have its own detailed Mars maps,” says Brian Harvey, a writer who covers the country’s space program. At least, that was the case until today, when Tianwen-1’s controllers decided they had seen enough to confidently initiate the spacecraft’s daring descent.

Packed inside a cone-shaped protective shell, Zhurong and its rocket-powered landing platform detached from the orbiter, descended toward Mars and began the fiery plunge through the planet’s upper atmosphere. After jettisoning its protective shell lower in the atmosphere, the spacecraft unfurled parachutes to slow its descent before riding thrusters down to a gentle landing on the surface. This was “very similar” to the powered landings China has used in its Chang’e missions to Earth’s moon, says Andrew Jones, a space journalist who follows the Chinese space program. The latest of those missions returned samples to Earth in 2020.

Other nations have tried and failed to land on Mars, but China’s success highlights how it is rapidly catching up to, if not exceeding, many of its counterparts. The Soviet Union notably attempted multiple landings in the 1970s, coming closest with Mars 3, which touched down on the planet but stopped working moments later. The U.K. reached the surface with its Beagle 2 lander in 2003. The craft’s communications antenna failed to deploy, however, dooming the mission. The European Space Agency (ESA) and Russia also came close with their Schiaparelli lander—until it crashed on Mars in 2016. ESA will try again with its Rosalind Franklin rover in 2022. Until today, only the U.S. had successfully operated any spacecraft on Mars for a significant period of time, starting with the Viking landers of 1976 and extending to the country’s multiple landers and rovers that are exploring the surface today. China now joins this most elite and exclusive of clubs. “It’s a big day for China,” says Mark McCaughrean, senior scientific adviser for science and exploration at ESA.

We know better than anyone how hard it can be to get safely down to the surface.

China will now wait an undisclosed amount of time, as little as a day or up to perhaps a week, before driving the Zhurong rover down a ramp from the lander and onto the surface. The six-wheeled solar-powered vehicle has a planned lifetime of 90 Martian days and is thought to have a top speed of 200 meters per hour, Jones says, although it will likely explore much more slowly. China will upload commands to the rover via its Tianwen-1 orbiter, with ESA’s Mars Express orbiter acting as a backup. The rover will then perform its tasks autonomously on the surface, similar to the operational protocols NASA uses for its own fleet of robotic Martian explorers.

Utopia Planitia was also the site for NASA’s Viking 2 in 1976. It is a rather bland expanse of rock-strewn sand—decent for spacecraft landings but decidedly subpar for addressing cutting-edge research questions, such as whether Mars harbors past or present life. “[China is] not looking for biosignatures,” says Agnes Cousin, a planetary scientist at the Institute for Research in Astrophysics and Planetology in France, who has advised Tianwen-1 scientists. Yet Zhurong is still expected to perform important science on the surface of the Red Planet. “We always have surprises when we arrive on the surface,” Cousin says.

For the overall geological implications for Mars, it’s very nice to have a new location to compare.

The rover is equipped with a suite of six instruments and cameras to study the surface. They include a ground-penetrating radar that could look for water and ice up to 100 meters below the surface (NASA’s Perseverance boasts a similar instrument). Zhurong also has a magnetometer, the first ever sent to Mars on a rover. Alongside a similar instrument on the Tianwen-1 orbiter, which will continue studying the planet from afar, the rover’s magnetometer could reveal the details of how Mars lost its magnetic field—and consequently its atmosphere and water—billions of years ago. “Conceivably this instrument could help address that question,” says David Flannery, an astrobiologist at the Queensland University of Technology in Australia, who is familiar with China’s space activities.

Together the instruments will tell us more about how the Martian magnetic field operates today.

Another instrument of note is the Mars Surface Composition Detector (MarSCoDe), a device similar to ChemCam on NASA’s Curiosity rover and SuperCam on Perseverance, which will use a laser to vaporize rock specimens on the surface, revealing their composition. Cousin is part of both the ChemCam and SuperCam teams, and she was among a group of European collaborators that helped China develop their instrument. She traveled to Shanghai in 2019 to exchange information with Tianwen-1 scientists on topics such as data-processing techniques and calibration targets to include on the rover to test the instrument on Mars. “They wanted big calibration targets” for MarSCoDe, Cousin says. “So we gave them one”: a two-centimeter-wide square of an igneous rock called norite that is one of 12 such targets on the rover.

While the science goals of the rover may be somewhat modest, it is also expected to be a technology demonstration for a much more ambitious future project. By 2028 or 2030, China hopes to send a sample-return mission to Mars to bring pristine Martian rocks back to Earth. That timing is similar to, or perhaps even in advance of, when NASA and ESA plan to do the same with their own interplanetary grab-and-go effort. “Will it be China bringing the first Mars material back to Earth, or will it be NASA and ESA?” says Jacqueline Myrrhe, a journalist affiliated with the Chinese space Web site Go Taikonauts!

This could be a very good question.

Landing on Mars is the latest pinnacle achievement from China’s planned portfolio of ambitious space activities. But already the nation has more than proved its mettle. It has conducted numerous sorties to the moon and has begun the construction of a space station in Earth orbit. The nation may send a pair of spacecraft to the edge of the solar system in just a few years and launch a mission to Jupiter by the end of the decade. Now that Tianwen-1 has shown that China is an adept interplanetary explorer, even more audacious projects may be on the horizon. “It’s the first step for much more,” Myrrhe says.