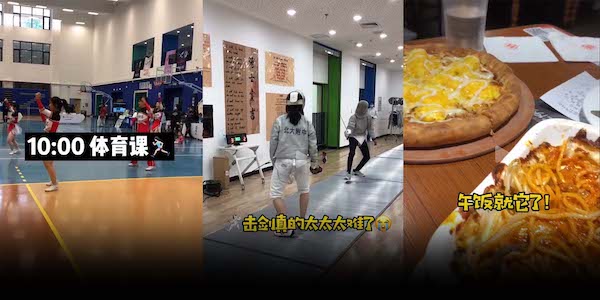 Screenshots from the video show students at the Affiliated High School of Peking University enjoying their time. From Weibo)

A college student’s homecoming visit to her fancy Beijing high school has dominated Chinese social media since Sunday, casting a spotlight on the privilege enjoyed by urban, coastal elites.

In a video shot on the campus of the Affiliated High School of Peking University, a vlogger claiming to be an alumnus walked her viewers through what she described as a typical day at her high school. 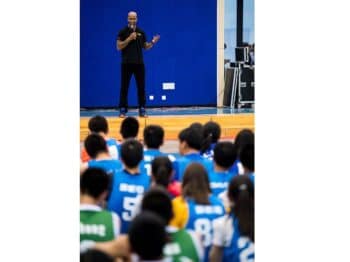 Stephon Marbury, a former NBA and CBA star and a legend to Chinese basketball fans, delivers a speech at a training camp held at the Affiliated High School of Peking University in Beijing, Sept. 19, 2018. IC

Arriving just before the first bell at 8 a.m., the vlogger guided her viewers to a class on Chinese history and culture; a cafeteria lunch with pizza, pasta, and chicken wings; a break room for napping and playing card games; a biology class involving a lab experiment; study hall at the library; a playground to ogle basketball players; and a theater to watch a play rehearsal.

The video ends with the vlogger and her friend showing off deluxe milk tea they bought on campus and rejoicing that they have no homework.

After watching the video–which may not have painted a full picture, given that the vlogger attended just two academic classes from 8 a.m. to 6 p.m.–viewers are left with the impression that regular days at the Affiliated High School of Peking University are fun and stress-free–in other words, a far cry from how many people in China remember their high school years.

Days after the video was posted on Douyin, as TikTok is branded in China, a tongue-in-cheek hashtag translating to “how happy it is to study at the Affiliated High School of Peking University” started trending on microblogging platform Weibo.

While some users reacted to the video with awe and pride, many more were envious and slammed it as tasteless, given the unequal distribution of educational resources in China. Parts of the countryside, for example, are dotted with so-called sparrow schools–buildings designated for education that have fallen into disuse as more rural families pull their kids out of school to work or in some cases send them off to urban boarding schools with greater academic resources.

Compared with the school in the video, “doesn’t it seem like high schoolers in Hebei province (home to a notorious test-prep school) spend three years in jail?” one user commented under a repost of the video.

I’m so angry. Why do some work so much harder for such unequal results?

Amid the outcry, people claiming to be alumni from, and current students at, other Beijing high schools spoke up to share their own experiences. “Now that we’re talking about privilege, I’ll explain why I’m proud of mine,” one self-described student wrote in a lengthy Weibo post Monday, the word “privilege” printed in English among the Chinese characters.

The user described how her friend, a student at Tsinghua International School, a secondary institution named after Beijing’s other elite university, was weighing whether to apply for admission to Tsinghua University without taking the gaokao, China’s formidable college entrance exam, or take the test so she could apply to another school and study art–a traditionally nonlucrative undertaking that most Chinese don’t have the luxury of pursuing.

The author of the post said that, instead of dismissing this girl’s deliberations as humblebragging or resenting her silver-spoon status, she and another friend offered her genuine feedback and encouragement.

“By now, my pride is fully embodied,” said the author of the post, referring to her relief at being able to treat the girl kindly–as a friend rather than a competitor. “Do you think the backlash from these keyboard warriors is just because they’re dissatisfied with their education? Their lives are consumed by raging against inequality, their expressions endlessly saturated with the word ‘jealousy.’”

Although the Weibo user had soon deleted her post, Tsinghua International School and Tsinghua University both responded, denying that students from the high school had an easier route to the university.

Hashtags about the video and the lengthy post that followed have dominated Weibo this week, generating more than 1.3 billion combined views by Thursday afternoon. Many online simply sneered at the post for showing a cringeworthy lack of self-reflection.

“Now that we’re talking about privilege,” one Weibo user quipped,

I don’t need to copy-paste to add that English word into my writing. By now, my pride is fully embodied.

The on-and-off discussions about education inequality in China have intensified in recent years. In 2017, Xiong Xuan’ang, a teenager who had the highest gaokao score of any high schooler in Beijing, went viral for expressing concern and empathy for the difficult road children studying in remote areas face in winning admission to top universities and potentially changing their lives.

I was born in a big city like Beijing. As such, I enjoy lots of educational resources that aren’t accessible to students in rural areas.

For the few rural students who manage to defy the odds, score high on the gaokao, and win coveted spots at universities in Beijing and Shanghai, they often have a hard time fitting in with their urban peers. Some self-deprecatingly refer to themselves as “exam experts from small towns,” suggesting that, beyond being able to score well on tests, they are poorly equipped to handle college life in a big city.

“The structural problem (of education inequality) exists in China,” Li He, an associate professor at Renmin University of China who specializes in the sociology of education, told Sixth Tone. Take high school students in Beijing: According to Li, many won’t be satisfied unless they’re admitted to one of the best universities in the country.

“However, for students in rural areas, lots of them end up in vocational education, without the opportunity to enter high school,” she said.

As for the video that started the whole discussion on privilege and inequality, Li–whose own child attends an elite Beijing high school–said she thought it was probably misleading.

With so many couples pinning their hopes on their children living better lives than they did, “the competition in Beijing is very harsh,” she said.

High schoolers in this city are exhausted.