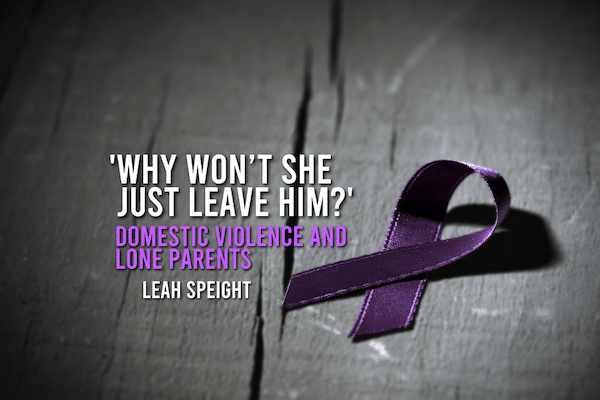 “Why won’t she just leave him?” This is a question I asked once when hearing of a woman living with a man who was abusive to her and her children. I don’t fall into the statistics of the one in four women in Ireland who have suffered physical or sexual abuse from a partner, so I didn’t understand the kind of barriers that keep women from leaving.

In 2011, when then Minister for Social Protection, Joan Burton, announced cuts in the Budget 2012 to the One Parent Family Payment, I was a single mother with an 11-year-old son. I listened to politicians discuss how much families like mine were costing the state, debating the lifestyle choice of a gravy train ride by fallen women. It didn’t take long for the outpouring of anger of many lone parents on social media, so we started to connect and agreed to meet up. We formed the campaign group Single Parents Acting for the Rights of our Kids (SPARK), and almost ten years on, our campaign is still active.

I fitted the stereotype perfectly; got pregnant young, and the relationship didn’t last. I had internalised that stereotype and, if I’m honest, I expected to meet women through the campaign who just happened to get pregnant young. The reality shocked me because for most of these women, parenting alone was a result of escaping domestic violence. It was the most common reason, and still is a decade on.

There is no recorded data in Ireland showing how many single mothers are parenting alone as a result of a physical, mental, or sexual abuse by an ex-partner. What we know is that a quarter of families with children in Ireland are headed by a lone parent and over 85% of lone parents are women. We in SPARK suspect that if data was collected in Ireland, the evidence would suggest that a high percentage of them have left a partner who abused them.

Abuse and the pandemic

For ten years now, SPARK have been witness to what we would describe as a shadow crisis of violence against women and it is no exaggeration to say it has us fearing for women’s lives.

Recent alarming reports from organisations like Women’s Aid Ireland, Rape Crisis Centre, and SAFE Ireland show a spike in calls to their services during the pandemic. The healthcare advice of a lockdown confined families to their homes, but without adequate resources and measures in place to alleviate the experience of abused partners, this had a direct impact on the rise in calls to domestic violence services. SAFE Ireland had more than 6000 women seek their services during the pandemic, and 1315 women were denied a place of refuge due lack of space.

This shadow pandemic, as described by charity organisations that work with assisting victims of domestic violence, has resulted with a need for awareness advertisements.

This is not a criticism of the great work done by charity organisations who are stretched to their limit. These organisations have had their funding cut during the austerity years, never to be restored. They have done the work that governments should have, with little thanks or funding in return. The fact that Ireland has less than a third of the refuges it needs is because of underfunding from past and present governments.

The increase in domestic violence during the pandemic is not only attributable to the healthcare restrictions. This crisis has been worsening for years. And the housing crisis is a massive barrier to women getting out of an abusive relationship and it is keeping women and children in a home with domestic violence.

SPARK has seen this first hand. We are only a campaign group but we have had to signpost an increasing number of women to organisations who are in a position to help. Many of these women are making plans to leave, and with children involved, they come across our group.

We helped a woman who was hospitalised by her abuser, and decided to leave when he killed their pet dog in front of her four-year-old daughter, forcing her to breaking point. Though we directed her to services that she needed, a failed inspection by a social worker of the temporary accommodation she was in left her with an ultimatum–find a new home in three weeks or lose her child to the care system.

The housing problems were due to her landlord, but she was faced with the consequences. It was impossible in the housing crisis to find a home so quickly, and despite best efforts by SPARK and a local TD, a home priced in the rent caps range could not be found. The fear of her daughter being taken into care saw that woman end up back with her abuser, when the three weeks were up.

Out of the 11 women, 5 of them had been impacted by housing issues in the past, as they were in a cycle of instability. Focus called on the Government to gather more research on domestic violence and homelessness, as specific actions needed to be directed on the high volumes of lone parent families making up homeless figures.

One parent families lead the table in Ireland for highest consistent poverty and deprivation rates. This has been the case for decades, yet the cuts to the One Parent Family Payment implemented by Joan Burton have never been restored. This is something we can never forgive. A recent report from SVP highlights the failure of the Labour/Fine Gael government’s cuts, as it showed that the poverty of working lone parents has doubled between 2012 and 2017. This poverty forced on all lone parents is a barrier for any woman trying to start a new life with her children.

Yet women are expected to prove they are seeking employment during this crisis to receive financial assistance. If your children are over the age of 7 years old, you must hit the criteria of the Jobseeker’s Transitional Payment and show you are actively seeking part-time work or education to qualify for a payment. If the children are over the age of 14 years old, the mother fleeing domestic violence must show that she is actively seeking full-time employment to get a JSA payment. The circumstances and trauma of domestic violence are not considered when awarding a payment.

The state made an exception from the Budget 2012 changes, so that in the case of a bereavement, it would allow a person to claim One Parent Family Payment for 2 years regardless of the children’s age. There is some recognition here that, regardless of age, help is needed for parents. But this wasn’t applied across the board.

We suspect the reason that the state won’t collect data on how many lone parent families have escaped domestic abuse is that they don’t want to publicly acknowledge the domestic violence crisis. If the evidence presented the reality we know in SPARK, they would be under pressure to make changes to the One Parent Family Payment. The narrative about the lifestyle choice of ‘fallen women on the gravy train’, and needing to be activated to work, would no longer hold up.

The negative stereotype forced on single mothers as lazy has impacted all lone parents regardless of the situation that they were parenting alone. The so-called activation policy has failed, as the policy negatively hit the income of parents working part-time from day one.

All of the poverty traps that face lone parents and the out-of-date court system that fails women of domestic violence add to the problems women face when trying to parent alone. All need urgent action, and the biggest barrier we need to challenge right now is the housing crisis. We cannot continue to ignore the shadow crisis of domestic violence in that housing crisis.

Women’s Aid said last year that they had 671 disclosures to their service from women terrified as their partner threatened to kill them. In 2020, we had 3 women die violently, and on April 17th this year Jennifer Poole was murdered in her home with her 4-year-old son in the home.

We have no idea or knowledge of how many women and children in Ireland live in a home with domestic violence but we do know there are huge barriers with a worsening housing crisis that is making it harder for women and children to escape.

This shadow crisis needs to be brought out of the shadow with urgent action required or sadly we will hear of more femicide cases.

Why won’t she just leave him? The answer is she can’t.

Leah Speight is a socialist activist with People Before Profit in Dublin and a founding member of SPARK.