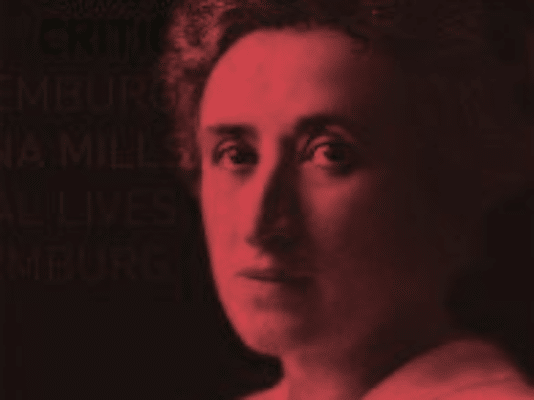 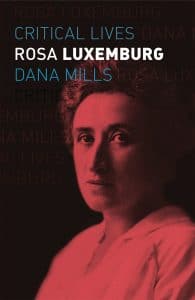 More than 100 years after her murder by counterrevolutionary soldiers during the German Revolution of 1918-1919, Rosa Luxemburg continues to demand attention. As one of socialism’s most prominent Marxist theorists and one of its most courageous revolutionary activists, Luxemburg remains inspiring to radicals today. Not surprisingly there is a large literature on most aspects of her life and work, including relatively recent major biographies such as those by Annlies Laschitza (1996) and Ernst Piper (2018), which, unfortunately, have not been translated into English. J. P. Nettl’s massive study, originally published in 1966, remains the standard scholarly work in English, while a more accessible volume by Luxemburg’s comrade, Paul Fröhlich, is now over 80 years old. Likewise, Stephen Eric Bronner’s brief 1981 biography, which examined the applicability of Luxemburg’s thought to the conditions of the late twentieth century, is also dated. Meanwhile, Kate Evans’s recent graphic biography provides an innovative presentation of Luxemburg’s life, but lacks the depth that a more text-oriented biography can provide.

Thus, for some time the field has needed a succinct, but also thorough, biography designed to introduce Luxemburg to twenty-first century readers. Dana Mills’ new book meets that need. Mills, a member of The Complete Works of Rosa Luxemburg editorial board, has set herself ambitious goals. At a time when identity politics has thoroughly suffused the analytical discourse of the Marxist and non-Marxist left, she aims to show how Luxemburg ‘never fitted the boxes of her own definition of identity and refused to see others as fitting into specific boxes either.’ (7) By illustrating her ‘raw humanity’, including her flaws and contradictions, Mills aims to illustrate how Luxemburg’s passionate study of what it means to be human sheds light on our struggles for justice today.

Luxemburg left behind a rich legacy of public and private papers which Mills uses to show how this perennial outsider, a woman, a Pole and a Jew, who was often subject to crass discrimination and inequality, devoted her life to the fight for justice. Crucially she illustrates how her empathy for the plight of others placed her at the forefront of struggles against war, imperialism, racism and inequality. Mills examines how, as one of European Social Democracy’s most innovative and influential thinkers, Luxemburg influenced the movement’s theory and practice in the first two decades of the twentieth century, but she also stresses, from an explicitly feminist perspective, how her complex, passionate and sometimes contradictory personality and private life was intertwined with her public one.

The biography is divided into six chapters, five of which deal with the narrative of Luxemburg’s life, and the last of which analyzes her legacy. The opening chapter examines her childhood home and early politicization in Poland, her education and political work while at the University of Zürich, and her move to Germany in 1898 where, by publishing Reform or Revolution, her powerful polemic against the ‘revisionism’ of Edward Bernstein, she burst ‘like a clap of thunder’ into the leading ranks of German Social Democracy. Chapter two describes her emergence as a major figure in the international labor movement, her engagement in its critical debates on the relationship of democracy, freedom and Marxism, and the tensions between her closely connected public and private lives, especially her relationship with Leo Jogiches, a Lithuanian revolutionary with whom she had fallen in love in Zürich. Luxemburg’s experience in Poland during the Revolution of 1905 and the political conclusions she drew from it lie at the heart of chapter 3. Her criticisms of the SPD leadership’s timid approach to radical political tactics, such as the mass strike, and of the majority’s insistence on pursuing a largely parliamentary strategy, set her increasingly at odds with many former friends and allies, such as the party’s co-founder, August Bebel, and its leading theorist, Karl Kautsky. Her estrangement from the party leadership reached its apogee in August 1914, when a majority of the SPD’s leaders abandoned internationalism and supported the government’s war effort. Chapter 4 traces her unremitting struggle against militarism and her long wartime imprisonment, during which, while trying to cope with the loss of lovers and friends, she did all she could to oppose the war and reorganize the workers’ movement. Released in the wake of the imperial regime’s collapse in November, Luxemburg immediately threw herself into revolutionary work in Berlin. It was her dedication to her revolutionary duty, the subject of chapter 5, that soon resulted in her death at the hands of troops brought in by a provisional government headed by her former comrade, SPD leader Friedrich Ebert.

Mills’ great strength is her ability to show how Luxemburg’s ideas, her political activities and her personal life can illustrate the realities of the past while also informing the struggles of the present without resorting to hagiography. Her first chapter serves as a template for the rest of the book. There she describes how Luxemburg grew up in an open-minded, cosmopolitan, middle-class Jewish family in Warsaw in which crass economic inequality was the norm and Russian and Polish hostility toward one another and toward Jews was pervasive. Challenged by a hip disease that forced her to walk with a limp and facing antisemitic discrimination in school, Luxemburg developed a fearless, anti-authoritarian and, perhaps most importantly, empathetic personality. She became a top student, mastered six languages and, crucially, became determined to take action to end the injustices that she experienced all around her. At 16, Luxemburg joined the illegal Proletariat Party, which emphasized workers’ self-emancipation through class struggle and rejected Polish nationalism as a means of achieving equality and justice. In 1889 Luxemburg enrolled at the University of Zurich, where she wrote a Ph.D. dissertation later published as The Industrial Development of Poland, a work reflecting a Marxist approach to political economy as well as her continued opposition to Polish nationalism, a view contrary to that of Marx and Engels, who viewed Polish independence from reactionary Russia as an advance in the workers’ struggle for emancipation. Along with Jogiches, she helped found the Social Democratic Party of the Kingdom of Poland and Lithuania, which opposed the more nationalist Polish Socialist Party. Mills describes Luxemburg and Jogiches’ long and intense relationship, in which the two struggled, ultimately in vain, to balance the all-consuming fight for the cause of revolution and the desire, particularly on Rosa’s part, to have a normal family life.

These themes–Luxemburg’s empathy for the underdog, her abiding interest in Marxist political economy, her willingness to challenge widely accepted premises of servitude, her deep commitment to internationalism, and her insistence on participating in a male-dominated world of revolutionary activism while simultaneously seeking the love and security of family–recurred throughout her life. Mills convincingly shows how they simultaneously drove her forward toward her goals, while sometimes also resulting in great personal costs.

Luxemburg was a prolific author and Mills appropriately selects a few key writings, e.g. Reform or Revolution (1898), The Mass Strike, Political Party and Trade Unions (1906) and The Accumulation of Capital (1913), to illustrate at length how she, in her own words, attempted ‘to inflame [people’s] minds […] with the breadth of my vision, the strength of my conviction, and the power of my expression.’ (28) The author shows how Luxemburg was unequivocal about the importance of democracy in the movement’s organizations and that socialist revolution would only result from below, through the actions of the class-conscious proletariat, not through the tutelage of a vanguard party. Such views put her at odds with many in the SPD and in the trade unions, as well as with Lenin and the Bolsheviks, whose revolution in 1917 she supported, but whose approach to political organization and governance she criticized.

Mills describes the analysis of The Accumulation of Capital, Luxemburg’s important analysis of the relationship between the reproduction of the capitalist system and imperialism as ‘brilliant’, but most Marxists then and now would probably agree with Lenin that, as a critique of Marx’s analysis of capitalist reproduction, the work is a ‘muddle’. (97) Mills is right, however, that the book’s searing critique of the brutality of capitalist expansion remains compelling.

Luxemburg’s empathy for the victims of imperialist aggression reflected her general outlook regarding the oppressed. Mills shows how, as a woman and a Jew, she encountered vicious discrimination, even among male Social Democratic leaders who, like Austrian Party leader Victor Adler, resented her criticisms of their policies and called her a ‘poisonous bitch.’ (87) Luxemburg coped with such hostility by relying on friends, such as Clara Zetkin and Luise Kautsky, and also by pursuing a wide range of other lifelong interests in science and art. Mills’ analysis of her deep engagement with the latter and with her friendships, especially as revealed in her prison correspondences, illustrates well the complexity and depth of her personality.

The main weakness of Mill’s work concerns the occasional lack of adequate historical context, especially during the period after 1914. Virtually nothing is said about the complexity of the wartime factions within German Social Democracy and the emergence of a growing anti-war movement culminating in the formation of the Independent Social Democratic Party (USPD) in 1917, of which Luxemburg’s grouping, the Spartacus League, formed a part. The author’s description of the events precipitating the sailors’ mutiny in Kiel is factually incorrect; she misidentifies the Provisional Government formed on 10 November as one consisting solely of representatives of the SPD, rather than a coalition that also included an equal number of representatives from the USPD. She says very little about the issues dividing the coalition or of what led the Spartacus League to separate from itself from the USPD at the end of December 1918 and to subsequently establish itself as the German Communist Party. She incorrectly asserts that the withdrawal of three SPD ministers (rather than those of the USPD) from the government led to the crisis that precipitated the onset of counterrevolution. The disastrous radical uprising of January 1919 and Luxemburg’s role in the debates leading up to it are not adequately discussed, and there is no mention of the SPD’s fateful decision to ally itself with the army to crush the left. Thus, the authors’ treatment of Luxemburg’s role in the revolution seems hurried and would have benefited from lengthier analysis of key events. Less important, but grating, are some spelling mistakes, especially the repeated misspelling of the key SPD leader Philipp Scheidemann’s last name. The book is equipped with endnotes and a useful bibliography, but there is no index.

These criticisms aside, Mills’ biography is an overall success. As her closing chapter makes clear, Luxemburg’s legacy remains a powerful one that continues to draw the interest of scholars and is claimed by activists in a variety of arenas. This book will help a new generation of readers to join the discussion.

William Smaldone teaches modern European history at Willamette University. His most recent publications include European Socialism: A Concise History with Documents (2019) and, with Mark E. Blum, Austro-Marxism: The Ideology of Unity, 2 vols. (2017).

Off the Rails: New report by Corporate-funded think-tank reveals how profit-driven motives drive New Cold War against China
From post-Marxism back to Marxism?