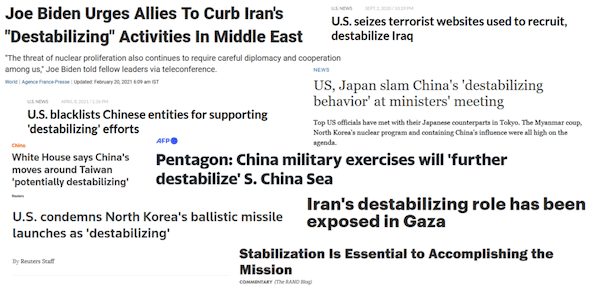 The world watched aghast last month as Israeli forces during Ramadan stormed the Al-Aqsa Mosque, the third holiest site in Islam, attacking and injuring hundreds of worshipers. The IDF proceeded to target schools, media centers and hospitals in Gaza—frequently described as the world’s largest open-air prison because of the state of siege it’s been under since 2007—killing hundreds, injuring thousands and forcing tens of thousands to flee. 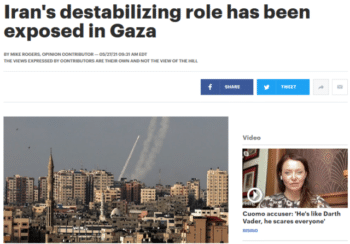 Mike Rogers argued in The Hill (5/27/21), “Until we recognize and call out Iran’s destabilizing influence in the region, we will not be able to make any real progress on any of the litany of issues facing the Middle East.”

Describing these events in The Hill (5/27/21), former high-ranking Republican Rep. Mike Rogers identified a different culprit: Iran. “Iran’s involvement in the current crisis is barely concealed,” he wrote, accusing the Islamic Republic of encouraging and “direct[ly] enabling” the violence. “Iran’s destabilizing influence is seen across the region,” the U.S. official pontificated:

From Yemen with its support of the Houthis to Lebanon with its support of Hezbollah, its backing and support of Bashar al-Assad in Syria and its attempts to undermine democracy in Iraq. Tehran seeks not stability, growth, or peace, but chaos and instability in the region, and it is proving effective in this pursuit. Iran’s policies in the Middle East have done nothing but bring ruin to the region.

Other pundits laid the blame on Hamas. “Arab governments may criticize Israel for its actions in Jerusalem and the bombing, but they are very wary of Hamas’s desire to destabilize Israel/Arab relations,” wrote David Makovsky and Dennis Ross in the New York Daily News (5/14/21).

“The terrorist group [Hamas] will keep arguing that the only way to liberate Palestine is through armed resistance, not the more palatable tactics of its rival, Fatah,” wrote the Wall Street Journal (5/25/21), adding that “quashing radical Islamist movements that destabilize the Middle East and threaten U.S. allies is a key aim of U.S. regional policy.”

Others might question whether the U.S., who just blocked multiple United Nations’ ceasefire attempts while greenlighting $735 million worth of arms sales to Israel, might be a more obvious “destabilizing” factor in the conflict and the region more generally.

Yet this appears not to have been considered for one moment. That is because, while the Merriam-Webster dictionary defines “destabilize” as “to cause (something, such as a government) to be incapable of functioning or surviving,” in media and political speak, “stability” often simply means “under U.S. control.” Therefore, by definition, the U.S. cannot destabilize another government or region; only foreign actors can do such a thing.

To be fair to Rogers, he was merely echoing the statements of President Joe Biden, who said in February, “We must address Iran’s destabilizing activities across the Middle East,” and those of the most influential think tanks in Washington (e.g., Council on Foreign Relations, 7/16/14; Center for American Progress, 7/17/15; Heritage Foundation, 10/16/17; American Security Project, 3/5/21), who constantly accuse Iran—and not the U.S.—of destabilizing the region.

Once we remember what “stability” and “destabilizing” mean, news from many of our most influential outlets makes much more sense. In 2014, the New York Times editorial board (6/18/14) condemned China for “threatening the stability and security” of nations in the South China Sea, but did not comment on its own government’s actions in the region, such as encircling China with military bases and conducting war games with nuclear-powered aircraft carriers in the South China Sea.

More recently, it reported on Secretary of Defense Lloyd Austin’s trip to Tokyo to try to build up a military alliance against the People’s Republic (New York Times, 3/16/21):

Mr. Austin noted Beijing’s “destabilizing actions” in the South and East China Seas, saying, “Our goal is to make sure that we maintain a competitive edge over China or anyone else that would want to threaten us or our alliance.

This passage makes far more sense if “destabilizing” is read to mean “U.S.-challenging.”

Since the U.S. and its allies can’t really be out of their own control, it is not surprising that the word is largely reserved for enemy states. Venezuela, for example, is commonly denounced as having a “destabilizing” effect on the region (e.g. Washington Post, 4/10/06; Reuters, 11/27/08, 6/28/09). Throughout the 2000s, President Hugo Chávez led a group of Latin American governments intent on pursuing a domestic and foreign policy independent from the U.S.

The New York Times (6/1/05), after lamenting that George W. Bush’s Free Trade Agreement for the Americas had been rejected; that the Organization of American States had ignored the U.S.-backed candidate, instead electing a Chilean socialist as secretary general; and that Chávez was pioneering a new Latin American news network (TeleSUR) and signing oil deals with Argentina and Brazil, noted that for these reasons the Bush administration considered him a “destabilizing force.”

Later that year, the Times (12/19/05) told readers that the U.S. saw Chávez, Bolivian President Evo Morales and Cuban leader Fidel Castro as part of a “destabilizing alliance.” This makes no sense whatsoever under the dictionary definition, as the new regional unity was actually helping Latin America prosper. But is perfectly understandable under the Washington-centric interpretation of the word. The U.S. later helped overthrow Morales, and has attempted to do the same in Venezuela and Cuba, no doubt in an attempt to bring increased “stability” to those countries.

No ‘intent to destabilize’ 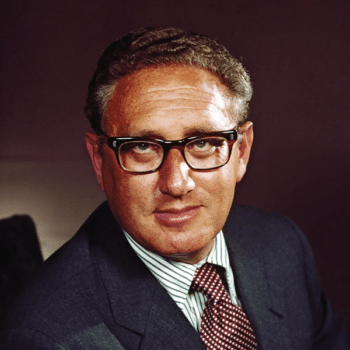 Henry Kissinger: “The intent of the United States was not to destabilize or to subvert.”

This is far from a new concept. In the 1970s, the United States conducted a campaign of covert violence and economic warfare against the democratically elected Chilean President Salvador Allende, doing “everything we can to hurt him and bring him down,” in the words of Nixon-era Defense Secretary Melvin Laird.

Still, Nixon National Security Advisor Henry Kissinger, the architect of Chile’s descent into a military dictatorship that killed or tortured tens of thousands of its own citizens, crashed the economy multiple times and drove hundreds of thousands into political exile, insisted that stability, not destabilization, was his goal. “The intent of the United States was not to destabilize or to subvert,” he told the Senate Foreign Relations Committee, while privately assuring Nixon that they had “created the conditions as great as possible” for the coup (National Security Archive, 5/26/04).

Media follow Kissinger’s lead: U.S. actions abroad, no matter how damaging, are often presented as bringing about stability. ABC World News (6/10/14) for instance, described the Iraq invasion as “America’s fight to bring peace and stability to this country” (FAIR.org, 6/11/14). This is still the official rationale for keeping troops in the area, one which is echoed by prominent think tanks (RAND, 4/24/18; Council on Foreign Relations, 5/28/18).

An entire lexicon of terms has been built up in corporate media to justify and launder violence. Enemy states are controlled by “regimes,” not “governments” (FAIR.org, 8/20/18); it is “aggression” when they do it, but “defense” when we do the same—or worse (FAIR.org, 4/30/21). It is not “torture,” it is merely “enhanced interrogation techniques” (FAIR.org, 4/2/14). We “stabilize” countries with our “muscular” foreign policy (FAIR.org, 8/28/20), while they destabilize regions merely by existing.

It is important to highlight these rhetorical tricks and call them out so that officials and hawkish pundits can less effectively sell the public more conflicts around the world. Hopefully your country will not be picked out as in need of stabilizing next.