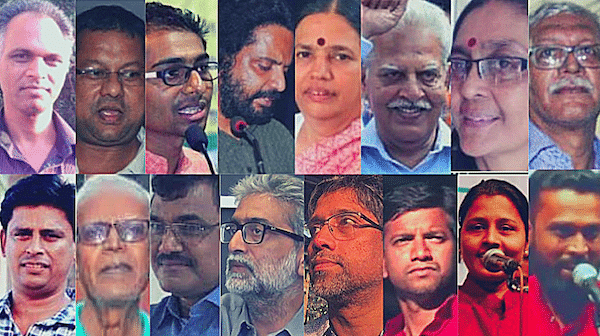 The 16 arrested in connection with the Elgar Parishad-Bhima Koregaon case. Photo: The Wire

New Delhi: Academics, European Union parliamentarians, Nobel laureates and other figures of international prominence have written a letter to the Prime Minister Narendra Modi, the Chief Justice of India, the chief minister of Maharashtra and other Indian authorities demanding the release of political prisoners arrested in connection with the Bhima Koregaon.

Expressing concern over the incarceration of human rights defenders in prisons in India under “deplorable hygiene conditions” and the absence of appropriate medical care, the letter said that political prisoners were at grave risk of contracting the new and more virulent strain of coronavirus.

The letter pointed out that overcrowded prisons with a shortage of water and medical equipment posed a serious health risk to political prisoners – many of whom had already contracted COVID-19 and reported a significant deterioration of their health.

“In a moment of unprecedented national calamity, we ask for decisive action by the government and court to set the BK-16 at liberty to avert further tragedy,” the signatories said and stressed that the political prisoners were facing a “humanitarian emergency”.

“Two of the BK-16 were recently shifted to multi-specialty hospitals after intense advocacy from family members and concerned citizens,” the signatories said and also referred to poet Varavara Rao, who received temporary bail on medical grounds after he was hospitalised for several weeks.

The entire statement has been reproduced below.

Accounting for almost a third of deaths from Covid-19 worldwide, the situation in India is grave. We are alarmed that a number of human rights defenders who are currently awaiting trial in Indian jails have developed serious health issues in jail owing to over-congestion and neglect, absence of appropriate medical care, and deplorable hygiene conditions. These political prisoners are now at great risk of contracting the virulent strain of the virus — which some have already contracted —  and will have no access to prompt medical care that is necessary to save lives. We therefore urgently seek that the temporary administrative order to release prisoners due to the pandemic be applied to political prisoners in India. We strongly believe that by turning a blind eye to the toll exacted by Covid on those it holds in its custody, the government is in violation of its constitutional duty to safeguard the life of these citizens.

Among the thousands in India arrested for “political offences” is a group known as the Bhima-Koregaon (BK)-16:  four academics, three lawyers, two independent journalists, a union organizer and social activist, a poet, three performing artists, and a Jesuit priest. A majority of them are senior citizens, some of whom have comorbidities that render them particularly vulnerable. All are human rights defenders with a record of writing, speaking and organizing for the rights of workers, minorities, Dalits, and Adivasis through peaceful and constitutional means. As the deadly second wave of Covid rages, with an equally serious third wave anticipated, the overcrowded prisons face severe water shortage and lack the medical equipment and personnel necessary to fight Covid. At least six of the arrested have contracted Covid-19, others have reported various acute infections and a rapid deterioration of health. Two of the BK-16 were recently shifted to multi-specialty hospitals after intense advocacy from family members and concerned citizens. Last year, one of the 16, an 80-year old poet, received temporary bail on medical grounds after weeks of hospitalization, at a moment when it was feared that he may die in custody.

In a moment of unprecedented national calamity, we ask for decisive action by the government and court to set the BK-16 at liberty to avert further tragedy. When the prison is unable to provide for the health and safety of the prisoners, the family has a right to offer such care as they deem necessary. None of the prisoners is deemed a flight risk. We acknowledge that while the Bombay High Court allowed three of the 16 arrested to be transferred to private hospitals, there is a humanitarian emergency facing all these political prisoners, whose lives are in grave danger from Covid-19.

With this letter, we call on the Indian authorities to take urgent and prompt action:

Release the BK-16 from overcrowded and unsafe prisons immediately.

Allow them to be cared for by their kin.

Show compassion and responsibility in order to avoid catastrophic consequences.

Ensure them their constitutional right to live and die in dignity.

The Hon’ble Chief Justice of India,

The Hon’ble Prime Minister of India,

The Hon’ble Home Minister of India,

The Hon’ble Chief Minister of Maharashtra,

The Hon’ble Home Minister of Maharashtra,

Mr Gerard Quinn,
Special Rapporteur on the rights of persons with disabilities,
Office of the High Commissioner for Human Rights (UN Human Rights)

Ms Irene Khan,
UN Special Rapporteur on the promotion and protection of the right to freedom of opinion and expression, Office of the High Commissioner for Human Rights (UN Human Rights)

Ms Rosa Kornfeld-Matte,
Independent Expert on the enjoyment of all human rights by older persons, Office of the High Commissioner for Human Rights (UN Human Rights)

Ms Tlaleng Mofokeng,
Special Rapporteur on the right of everyone to the enjoyment of the highest attainable standard of physical and mental health, Office of the High Commissioner for Human Rights (UN Human Rights)