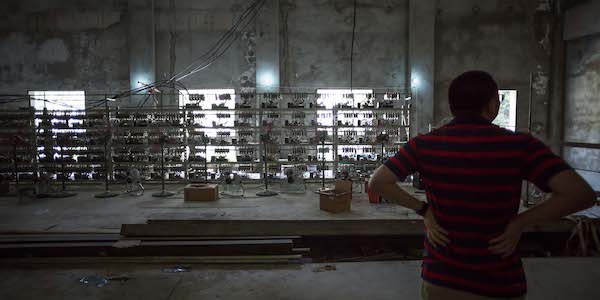 Two more Chinese regions have announced bans and suspensions of cryptocurrency mining, following several recent moves by the government to tighten regulation on the sector, citing its financial risks and energy use.

Northwestern China’s Qinghai announced Wednesday that all cryptocurrency mining—a computer-intensive process to verify transactions—would be halted in the province. According to a document seen by Sixth Tone, the provincial government said to stop new projects and shut existing facilities.

Qinghai said its move comes in response to central government calls to curb “high energy-consumption, high emissions” projects and to crack down on cryptocurrency mining and trading.

On the same day, officials in Changji Hui Autonomous Prefecture, in neighboring Xinjiang Uyghur Autonomous Region, ordered the suspension of all mining operations in a business zone where many such companies are located. The National Xinjiang Zhundong Economic-Technological Development Park produces its own coal-fired electricity, but was told to undergo inspections on whether its energy use is in line with national energy saving goals.

China has long been the center of the world’s cryptocurrency industry. About two-thirds of all mining for Bitcoin, the world’s most popular virtual currency, takes place in the country, and about half of that in Xinjiang.

After restricting trading in previous years, the Chinese government this year targeted mining, saying its high electricity use is not in line with the government’s goals to limit energy use and lower the country’s carbon footprint.

In March, China’s coal-rich Inner Mongolia banned cryptocurrency mining after the region failed to reach its energy use reduction targets.

Many miners flocked to Sichuan province, a major mining hub in southwestern China where most electricity comes from hydropower dams. Their argument that cryptocurrency mining with renewable energy does no harm proved unconvincing, with the province reportedly telling cryptocurrency businesses they have to leave by September, the end of the wet season.

Although 60% of Qinghai’s electricity generating capacity is renewable, a cryptocurrency mining operations owner told Sixth Tone in April that miners in the province also rely on coal-fired energy. “In the daytime, solar and wind play the main roles; at night, wind and thermal power take the lead,” he said.

In May, Qinghai and Xinjiang were among seven province-level areas reprimanded by the central government for failing to control their energy intensity levels during the first quarter of the year.

Chinese institutions have also recently reemphasized the risks they say cryptocurrencies pose to the financial system.

On Wednesday, industry body Payment & Clearing Association of China warned that virtual currencies can be used to avoid government oversight, and to conduct illegal activities such as gambling. Media reported the same day that authorities had detained 1,100 individuals over an unspecified timespan for using cryptocurrencies to provide illegal services like money laundering.

At an international conference held in Shanghai on Friday, Zhou Xiaochuan, the former president of the People’s Bank of China, compared cryptocurrency trading to “zero-sum” gambling. “The money that can be earned is money lost by other investors,” Zhou said.

This is a bit like a gambling table in a casino. If you want to win money, some other people participating in the gambling must be losing money.

Li You is a reporter at Sixth Tone focusing on environmental issues.