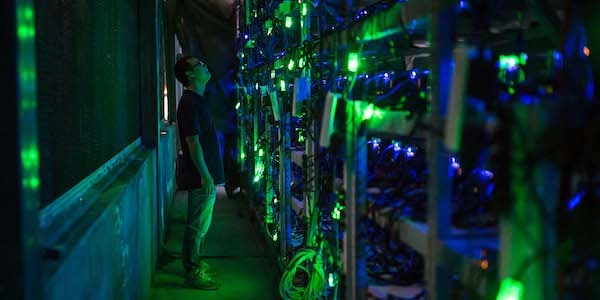 In what cryptocurrency insiders think could be the next step in China’s intensifying crackdown on virtual currencies like Bitcoin, energy regulators in the southwestern Sichuan province have called a meeting to discuss policies for cryptocurrencies, including the possible effects of enforcing a shutdown, according to a notice seen by Sixth Tone on Thursday.

The move follows a May 21 announcement by a central government financial regulatory body that for the first time targeted cryptocurrency mining, the energy-intensive computer process that verifies transactions. Worried over virtual currencies’ effects on the financial system, Beijing had already restricted trading in China.

The country is nevertheless home to about two-thirds of all mining operations for Bitcoin, the world’s most popular virtual currency. Local governments hoping to grow their economies had long welcomed cryptocurrency miners, who could soak up excess electricity.

In March, however, coal-rich Inner Mongolia banned cryptocurrency mining after the northern Chinese region failed to reach energy use reduction targets. Its local government intensified that crackdown on Tuesday when it proposed a new guideline that included stricter inspections and harsher punishments for anyone continuing to mine cryptocurrencies.

The notice from Sichuan’s energy supervision office, also dated Tuesday, called for a meeting on June 2 with the provincial power grid, electricity trading center, and energy suppliers to “fully understand the situation of cryptocurrency mining operations in Sichuan.” It asked for an “impact assessment of shutting down cryptocurrency mining on Sichuan’s hydropower curtailment this year.”

An operations manager at a Bitcoin mine in Sichuan, who requested anonymity because she wasn’t authorized to speak to the media, told Sixth Tone that miners in China are closely following the meeting’s outcome.

Sichuan is seen by many in the cryptocurrency industry as a possible safe haven because, they argue, the province’s hydropower dams allow miners to operate without releasing greenhouse gases. Many miners have flocked to Sichuan in recent months, they told Sixth Tone in earlier interviews, hoping to cash in on the coming wet season’s cheap electricity–possibly the last one with favorable policies in place, one miner said.

Increased demand from other electricity users, as well as the effects of climate change, have hurt cryptocurrency mining operations in Sichuan. Earlier this month, the province temporarily cut power to miners, as it had to ration it amid a delayed rainy season.

Apart from Sichuan, the operations manager said, another major concern for Chinese miners is Xinjiang, a northwestern region that relies on coal for its electricity and is home to about a third of the world’s Bitcoin mining operations. “If Xinjiang issues a ban on Bitcoin mining, there will be a large amount of mining machines in China that have nowhere to go during dry seasons.”

“Whether it’s Sichuan or Xinjiang, tightened policies would lead to Chinese miners going overseas,” she said. “Going abroad is the general trend. But there remain a number of miners who choose to stay in China, believing that the policy will not be tightened so quickly.”

However, Inner Mongolia’s proposed guideline, currently open to public consultation, says any facilities such as data centers and power plants that “deliberately conceal (or) fall behind in shutting down” mining operations will face unspecified punishments. It calls for all preferential policies to be canceled and warns against using cryptocurrencies to launder money or fundraise illegally.

On May 18, the region also set up a new hotline and email address, asking people to report any remaining cryptocurrency mining operations in the region.

Experts have long pointed to Bitcoin and other cryptocurrencies’ massive energy use as a threat to climate change mitigation efforts. Bitcoin’s global network is estimated to use about as much energy as the Netherlands, according to the Cambridge Bitcoin Electricity Consumption Index. Amid increased scrutiny over the currency’s impacts, the value of Bitcoin has plummeted in recent weeks.

In the wake of recent government statements, several mining service providers and cryptocurrency exchanges have announced measures to suspend services for users in China.

Li You is a reporter at Sixth Tone focusing on environmental issues.