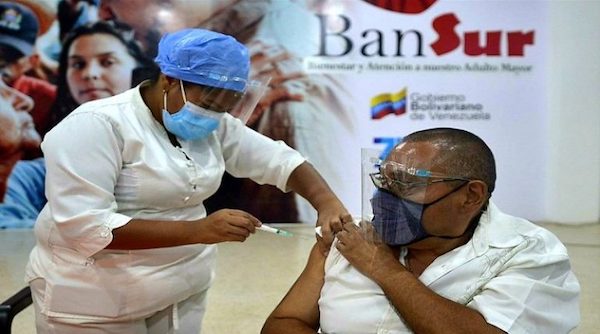 Venezuela began immunizing its population against COVID-19 with Cuba’s Abdala vaccine on June 28. The first batch of 30,000 doses of the vaccine arrived in the country’s capital, Caracas, on June 24. The same day, during the XIX Summit of the Bolivarian Alliance for the Peoples of Our America–People’s Trade Treaty (ALBA-TCP), President Nicolas Maduro reported that his government signed a contract with the Cuban government for the purchase of 12 million doses of Abdala.

Abdala, one of Cuba’s five anti-COVID-19 vaccine candidates, showed 92.28% efficacy during the third phase of clinical trials, which is the fourth highest efficacy in vaccines developed worldwide so far. Abdala requires three doses per person, which are administered at an interval of two weeks. It induces maximum immunity within 42 days after the application of the first dose. The vaccine also showed efficacy against the mutant strains of the coronavirus that are spreading across the Latin American and Caribbean region.

The agreement between the two nations will facilitate the immunization of 4 million Venezuelans. The vaccine will be gradually delivered to the country between July and October.

Venezuelan Vice President Delcy Rodríguez, while receiving the first batch of vaccines, thanked Cuba, its government and its people for their support in the tough times. “Venezuela, from the depths of its soul, thank the people of Cuba, its president Miguel Díaz-Canel, his government and our comrades who accompany us in this daily battle against COVID-19,” she said.

Cuban ambassador to Venezuela, Dagoberto Rodríguez, ratified the cooperation of his country in the face of the pandemic. “We continue in the struggle for the health of our people and have a deep political will to do more every day to strengthen these ties between Venezuela and Cuba,” he said.

The government also bought 11 million doses of vaccine through the WHO’s COVAX initiative. However, the delivery of those vaccines was blocked due to the commercial, economic and financial blockade imposed by the United States against Venezuela.

On June 12, the Union Bank of Switzerland (UBS) blocked the last four installments of the payment made by the Bolivarian Republic of Venezuela towards the COVAX mechanism, due to the U.S. coercive measures. After a global outcry, on June 17, the U.S. government suspended part of the sanctions against Venezuela and lifted the penalties to companies that carry out transactions with the Venezuelan state related to combatting COVID-19.

Despite the U.S. criminal sanctions against Venezuela and decades long embargo against Cuba, and the losses of billions of USD, both the socialist countries are successfully fighting the pandemic.