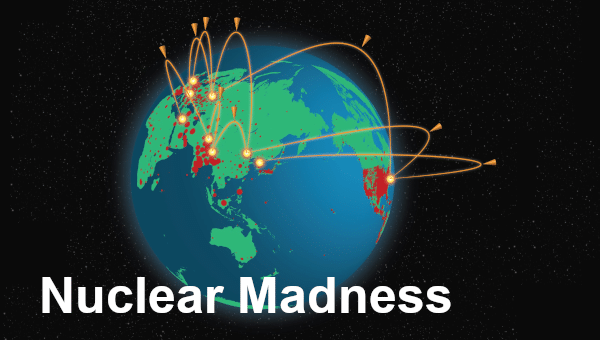 The latest brazen lie is the “rule of law” upheld by U.S. President Joe Biden at the G7 and NATO summits, especially lies about lawlessness surrounding nuclear weapons. During the presidency of the Donald Trump years (2017 to 2020), the power of one person to launch nuclear war was on full display. In 1983, one Soviet individual, Stanislav Petrov, “the man who saved the world,” was in the position to decide against launching. This ability of one person to push or not push the button is a nightmare failure of the rule of law and of governing structures.

There is at this time much more widespread public knowledge, rage, and political action about racism and rampant injustices. However, it is hard to know how much the public knows about nuclear weapons. Laws put in place to control or eliminate these weapons are officially ignored, abrogated, or signed but not ratified or enforced: Nuclear Non-Proliferation Treaty (NPT), Comprehensive Nuclear-Test-Ban Treaty (CTBT), the Anti-Ballistic Missile Treaty (ABM), Intermediate-Range Nuclear Forces Treaty (INF), the Open Skies Treaty (cancelled by Biden), and the Outer Space Treaty. The last remaining arms control agreement, New Strategic Arms Reduction Treaty (START), was reprieved by Biden until 2026. 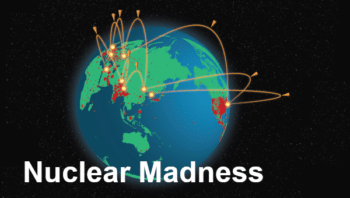 No nuclear-armed or NATO nations have signed the Treaty on the Prohibition of Nuclear Weapons (TPNW) that are now in force. The five permanent members (China, France, Russia, United Kingdom, and United States) of the UN Security Council have nuclear weapons, have signed but violate the NPT, and are the only nations with a veto. Meanwhile, Barack Obama committed more than $1-trillion over the next three decades to modernize nuclear weapons, and Biden announced an additional $750-billion. As well, in February, Biden increased spending for the U.S. space force, violating the Outer Space Treaty.

Officials routinely get away with nuclear lies: through plausible deniability, through concealing or minimizing nuclear lethality, by focussing on 5G satellites’ benign civilian uses rather than the satellites’ full spectrum surveillance uses, by conjuring an external existential threat (Iran, Russia, China), psychologically by Trump/Netanyahu-style bullying or G.W. Bush’s disarming boyishness, and by exploiting general fears that any mandatory regulations are undemocratic infringements of freedom.

There is also over one-half century evidence that nations get away with murder, that there are rarely consequences for violating conventions on just war, genocide, or crimes against humanity. Then there is the recent legalistic principle of the “least detrimental alternative” used to defend torture and wars if they prevent worse harms.1

When the White House Press Corp’s longest-serving member, Helen Thomas, asked newly elected (and Nobel Peace Prize winner) Barack Obama whether any Middle East country possessed nuclear weapons, Obama, knowing full well about Israel’s arsenal, said, “I don’t want to speculate.” Was the press corps pretending not to see that Obama was pretending not to see? Or was there a knowing wink acknowledging that transparent lies don’t matter because the old boys’ club does whatever it wants. Clearly, any law can be ignored, twisted or unenforced.

Women win the Nobel Peace Prize for their informed, years’ long work on formulating and negotiating the Treaty on the Prohibition of Nuclear Weapons (TPNW), but big men hold the “nuclear football,” and drop “Little Boy” (Hiroshima) and “Fat Man” (Nagasaki), and proliferate all they want. Ray Acheson, Director of Reaching Critical Will, who represented the Women’s International League for Peace and Freedom in the International Campaign to Abolish Nuclear Weapons (ICAN), just published Banning the Bomb, Smashing the Patriarchy.

Some people should be obligated to know and to inform. How many elected officials can even locate on an unmarked map the countries they bomb to smithereens, and what do journalists and educators know and disseminate about nuclear weapons? It is my impression that during the Cold War, there was a latent but constant sense of anxiety about nuclear weapons, but today this seems to have evaporated. We hear very little about the potential use of nuclear weapons.

Yet authoritative voices warn of greater danger than during the Cold War. Daniel Ellsberg speaks of the Big Five weapons companies

pushing the idea of a $1.7-trillion modernization, revitalization, as they say, of a doomsday machine that can destroy not all life on Earth, not even all human life, probably, almost surely, but 90 percent of it, seven billion people, if we exercised our current war plans in a war against Russia… And yet there’s hardly any discussion of this.

The public needs to know that today’s weapons are much more lethal than the bombs dropped on Hiroshima and Nagasaki at the end of WWII. Today’s bombs are in the range of 100-kiloton (over six times the force of the Hiroshima bomb) to 500-kilotons. “Scientists have calculated that even a small-scale nuclear war involving one hundred Hiroshima-type nuclear bombs between two countries, such as India and Pakistan, would have a devastating effect on Earth’s climate.” The black smoke would rise into the stratosphere, blocking out sunlight for years, and plunge the planet into temperatures too cold to support agriculture, leading to mass death and possible human extinction.

This limited war would involve only 0.3% of the world’s nuclear explosive power.2

During the Cold War, one restraint against launching a first strike against the Soviet Union was the realistic fear of a potent retaliatory nuclear strike. The crucial deterrent was Mutually Assured Destruction (MAD). However, G.W. Bush’s cancellation of the Anti-Ballistic Missile Treaty in 2003 permitted the use of missile defense (offense), a technology for detecting and destroying enemy missiles within one minute of launch, and hence, the U.S. belief that a nuclear war was winnable. In 1977, Donald Rumsfeld outlined strategies for a first strike, and in 2021, these conditions are in operation: precise strategic weapons to destroy enemy land-based missiles, anti-submarine warfare, missile defense, and space warfare to eliminate early warning, communications, and navigation satellites.3

At this time, Israel contributes significantly to obstructing measures aimed at the elimination of nuclear weapons. Chomsky, Pappé, and Henry Siegman all provide details about Israel’s successful strategy of covert provocations leading to reactions justifying Israeli retaliation [p. 114].4 It has served Israel’s leaders to represent Iran as an existential threat with a nuclear weapons program and Israel is a prime mover against Iran’s nuclear weapons agreement (Joint Comprehensive Plan of Action). Robert Fisk:

Yet we reporters do not mention that Shimon Peres, as Israeli Prime Minister, said exactly the same thing in 1996. That was 16 years ago. And we do not recall that the current Israeli PM, Benjamin Netanyahu, said in 1992 that Iran would have a nuclear bomb by 1999. That would be 13 years ago. Same old story.

Israel’s recent provocations against Iran include the assassination of General Soleimani, its targeted assassination of four Iranian nuclear scientists, the most recent in November 2020, the Natanz cyber attack in April 2021, and possible involvement in both the fire on Iran’s largest naval ship in the Gulf of Oman on June 2, 2021, and the fire on the state-owned oil refinery a few hours later. In an appalling irony, the UN meetings to establish a nuclear-free zone in the Middle East do not include the only Middle East country with nuclear weapons–Israel.

There is enough evidence that the destroyer’s venture into Russian territorial waters was not an accidental ‘innocent passage’, but rather a planned move, approved at the top level of the British government. Sailing a nuclear-capable destroyer into an adversary state’s territorial waters near that state’s key military base, and doing it in the runup to a massive NATO naval exercise in the Black Sea was an extraordinary and exceedingly dangerous provocation. Provocation is a tool of policy, and every provocation has a political purpose.

What, and whom, does law rule? Jasmin Zine writes that the “rule of law” is a breeding ground for violence and hypocrisy: in Canada, this “…rhetoric includes the liberal washing of white nationalism that politically camouflages xenophobic, Islamophobic and racist ideologies under the guise of ‘protecting democracy,’ ‘freedom’ and the ‘rule of law’ from what are regarded as illiberal, anti-modern and anti-democratic Muslims.”

This discrepancy between words, actions, and feelings is frightening: the United Nations (UN) was set up in 1945, and its first objective was to “end the scourge of war,” but in 1950, the UN launched the Korean War, a forgotten, hidden war. The U.S. several times considered using nuclear weapons against this largely impoverished civilian population. On the ground, “the documented violence was so extreme, so gratuitous, as to suggest a peculiar pathology” (p. 124). In the north, all cities were “annihilation zones” (p. 150). “Operation Chastise” destroyed dams, creating tidal waves that inundated towns and country, and people were reduced to living in caves.5

What is the rule of law? Because of U.S. pressure, the International Criminal Court does not have jurisdiction over the supreme crime of starting an illegal war. Astonishingly, only the five original nuclear-armed nations have veto power in the UN. The UN Charter states that international disputes must be settled by peaceful means, and opposing parties must refrain from the threat or use of force. Instead, the means must include negotiation, enquiry, mediation, conciliation, arbitration, judicial settlement, and assistance through regional agencies or arrangements. As a last resort, the Security Council decides about the use of armed force, but it can decide on measures not including the use of armed force such as demonstrations, blockades, or interruptions of economic relations. Yet, despite all of these “protections,” countries all over the world have engaged in innumerable wars since 1945.

In the lawless world, humans are abstractions represented as numbers and statistics. Experts quibble about the percentage of people who would die in nuclear war. Meanwhile, our hope today may lie in the fact that oppressed people globally are rising up to challenge the proliferation of nuclear weapons and rebuilding anti-war movements to challenge the militarism.

Judith Deutsch is a member of Independent Jewish Voices, and former president of Science for Peace. She is a psychoanalyst in Toronto. She can be reached at judithdeutsch0@gmail.com.