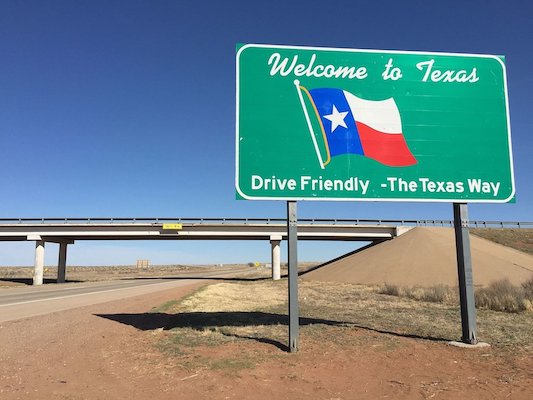 In early July, I found myself trucking down Interstate 35 in an aging Ford with our dippy, big-eared hound dog in the extended cab. Months ago, my husband and I had bought our ’95 F-150 with the aim of being analog on purpose, a result of our household’s pandemic-and deep freeze-inspired, light, liberal Austin prepperism. If we were going to be the kind of people who drive an electric car, we’d better also have a gas-powered vehicle in which to haul ass out of town. Without a CD player or a Bluetooth connection, we enjoyed the drive back to Austin from East Texas rolling the radio dial to the next available twang whenever the music got fuzzy.

It was the first proper road trip I’d taken since the Before Times. We spent the weekend with my folks in Franklin County, playing card games and trying out my new stand-up (or fall-down) paddleboard. Tired and happy and blessedly not-sunburned, I flipped through country stations on the sunny Sunday evening, ready to be back home but relishing finally, finally, not being at home.

The truck, the dog, Waylon and Willie on the radio—it was all just so Texan! And it was the first time in a long time I felt safe and optimistic and unafraid.

Until Don Huffines’ face rose over the horizon. Suddenly, the Dallas real estate baron lorded over the highway on a black, white, and red billboard decrying immigrants—the sign used a dehumanizing epithet—as coming for “our” rightful, hard-earned money. (I know you know who “our” is.) We were ushered home by Huffines every few miles urging us to fear our fellow Texans, or else. 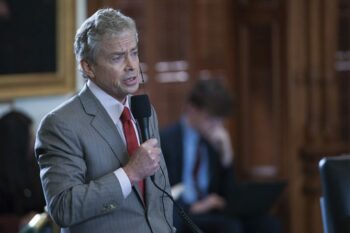 A former Republican state senator, Huffines is now running for governor, selling himself as a right-of-right primary challenger to Greg Abbott. His billboards make it look more like he’s running for Big Brother. Or executioner. His campaign’s fear-mongering aesthetic is obvious and effective, though not as intended. I certainly felt fearful: not of immigrants, but of the bare hatred on display. Abbott’s other Republican challenger is Allen West, a Tea Party politician from Florida who was forced to retire from the military and fined $5,000 for torturing an Iraqi police officer in 2003. His campaign promises to put “Texas first”—a slogan ripped from Donald Trump’s “America First” campaign, which was rooted in Nazi sympathy of yesterday and, evidently, today. Meanwhile, Abbott and other Texas Republicans have ramped up attacks on transgender people, especially trans kids, and attempts to whitewash history by barring educators from teaching curricula that covers racial injustice and racism. You know, history and current events.

Fear is old, old political currency. The manufacture of the “other”—immigrants and people of color, queer folks and poor folks, people who are many or all of those things—is as old as old gets.

The messaging might have been a little different in the past—see, “compassionate conservatism”—but conservative American politicians have been manufacturing, packaging, and selling this kind of panic for decades. What is different now in Texas is not that this fear-mongering is any louder or wronger, but that its enforcement and dissemination at the political level has moved from the institutional to the interpersonal, and in a state with tremendous economic and political influence. This is the inevitable next step in a fear-based politic that takes as a foundational premise the condemnation of democratic governance. Witness “drain the swamp,” or 40 years ago, Ronald Reagan’s inaugural salvo:

Two pieces of legislation passed this year in Texas distill this inexorable shift into its purest form: our new permitless carry law, which allows almost anyone to wield a handgun without a license or training, and our latest abortion ban, set to be enforced not by the state but by private citizens encouraged to sue for cash if someone, anyone, ends a pregnancy after about six weeks.

If that’s meant to rattle me, consider me rattled.

Tacit approval for the extrajudicial enforcement of white supremacy and patriarchy has a long history in this country; it is, in many ways, the history of this country. But a legislated mandate to surveil your neighbors, with the statutory encouragement to do so with a gun in hand? That doesn’t just make Don Huffines’ billboard about them coming for our jobs and our money scary. It aggravates and intensifies political views that were already violent, destructive, and deadly.

I have seen these new laws—along with everything from Ted Cruz championing the willfully unvaccinated as freedom fighters, to Abbott’s call for a border wall that border communities don’t want—decried as cynical, wrong-headed, and ignorant.

But is it cynical to demonize immigrants for trying to make a living? Is it wrong-headed to eschew a mask or a vaccine that saves lives? Is it ignorant to ban health care for trans kids, or drag a doctor to court for providing abortions?

Or is it greedy, white supremacist, patriarchal bigotry pasted over with an Infowars sticker? I think it is something much deeper and dirtier than good ole’ boys being good ole’ boys. It is mandated, legislated hate. We must name that and rebuke it, and instead assert a Texanness that is rooted in generosity and progress and kindness. Otherwise, we will continue to be pulled ever backward by those clamoring for the Texas pre-Voting Rights Act and Roe v. Wade, idealizing the not-so-good-old-days of a state founded on land stolen from Native and Indigenous people and built through the exploitation and oppression of enslaved people and immigrants. We will go down, deep into a place that will consume us with fear and rage and suspicion—by design, and to the enrichment of the very worst among us.

Don Huffines and his ilk claim to stand for real Texas values. Are the things I value—justice, equality, redress and reparation, mutual aid, education, and critical thinking—not Texas values? Huffines claims to be a fifth-generation Texan; I am at least that, and also, what the hell does it matter? I am here today, and my values are Texas values.