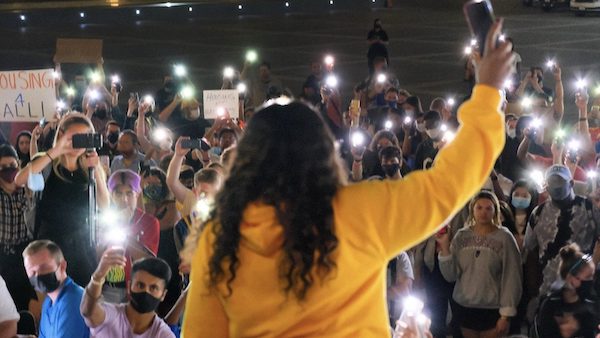 After days of protests against the expiration of the federal evictions moratorium, the administration of president Joe Biden issued a new moratorium on Tuesday, August 3. The new moratorium on evictions imposed by the Centers for Disease Control and Prevention (CDC) will be effective for the next two months, until October 3.

The moratorium will cover counties in the U.S. witnessing what the CDC deems to be “substantial” or “high” rates of community transmission of COVID-19. As per the CDC data, as of August 2, 2,604 of 3,219 counties are facing such high levels of spread, which translates to around 80.9% of the counties where nearly 90% of the U.S. population resides.

The new moratorium comes three days after the previous 11 months long CDC eviction ban expired on July 31, after both the CDC and the U.S. Congress failed to extend it before its expiration. The new moratorium is not as comprehensive as the previous one, but social movements, housing rights activists and progressive groups see this as a big gain from the Biden administration.

“This is a major victory for the growing movement to stop evictions and win the right to housing for all,” claimed the report by Liberation News, a publication associated with the Party for Socialism and Liberation. Liberation Newsalso speculated that the move to not make the moratorium is likely to withstand legal challenges by landlord groups in federal courts.

“The administration’s decision to have the new moratorium not be 100% comprehensive is likely designed to help it withstand this legal challenge, since a majority of Supreme Court justices last month stated that they would not approve of a moratorium extension,” the report stated.

The publication added that, much like other institutions, the Supreme Court as well is susceptible to people’s movements. This was also evident considering the Biden administration had taken a sharp u-turn on its earlier stand that the government was limited by the Supreme Court’s position to extend an eviction moratorium of any kind, which was disputed by many.

Progressive congresswoman Cori Bush of the Democratic Party has been leading a sit-in outside the Capitol building in Washington DC, which houses the U.S. Congress, ever since the U.S. House of Representatives adjourned for a six-week vacation on Friday, July 30, without passing any measure to prevent a nationwide evictions crisis.

Bush, who had previously experienced eviction and homelessness as a mother, has been the most prominent advocate of housing rights, an extension to the moratorium and rent cancellation in the U.S. Congress. Over the next five days, her sit-in was joined in by representatives from various grassroots social movements, and received extensive support from her progressive Democratic colleagues in the Congress, including the likes of Alexandria Ocasio-Cortez, Mondaire James, Jimmy Gomez, Jamaal Bowman, Bernie Sanders, Ilhan Omar and others.

Responding to the Biden administration’s decision, Bush stated that the building pressure “movement mountains”. “For 5 days, we’ve been out here, demanding that our government acts to save lives,” she said in her tweet.

On Friday night, I came to the Capitol with my chair. I refused to accept that Congress could leave for vacation while 11 million people faced eviction.

For 5 days, we’ve been out here, demanding that our government acts to save lives.