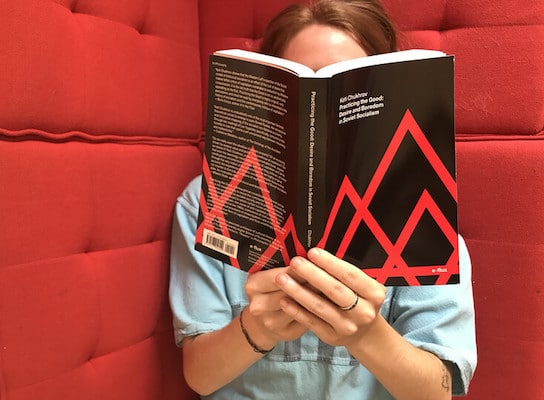 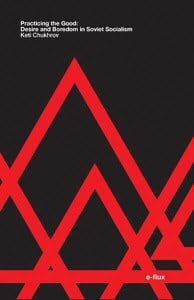 In a recent article, Maria Chehonadskih (2021) argues that the adjective ‘Soviet’ is today used as a `floating signifier’ either embracing totalitarian connotations of the Soviet State or positively referring to the event and legacy of the Russian Revolution. While appreciating the first decade after the Revolution as a period of avant-garde experimentation, Western Marxists still dismiss the Soviet experience of anti-capitalism after the Stalinist period. In fact, Soviet Marxist theories and practices from the 1960-70s are terra incognita for many contemporary Marxist theorists.

Russian philosopher Keti Chukhrov’s Practicing the Good: Desire and Boredom in Soviet Socialism excellently unveils how this dismissal of Soviet socialism originates in an unresolved desire for alienation in post war continental thought, permeating the works of Butler, Deleuze, Lyotard, and others. Instead of historically revisiting Soviet socialism, Chukhrov’s ambitious book analyzes how Soviet socialist culture challenges unrevised assumptions, paradoxes and aberrations in contemporary anti-capitalist critique. Chukhrov further explores the potentially divisive claim that Soviet socialism did not fail for being insufficient but because it was too much socialism.

Practicing the Good sets out to show how contemporary leftist theory resists anti-capitalism by dismissing its radical other: the concrete experience of Soviet socialism. In short, Chukhrov analyzes why the capitalist subject never really desires abolishing capitalism. Against this backdrop, Chukhrov argues that even what is aestheticized today as anti-capitalist critique unwittingly affirms the capitalist status quo. Instead of striving for radical transformation, the Western Leftist prefers her bourgeois bubble, narcissistically ‘leading the revolution one Guardian article at a time’, as Adam Lehrer recently put it. Consequently, for the capitalist subject, socialism as radical de-alienation, sublated desire, and the abolition of libidinal phantasmagoria is an uncanny dystopia.

Chukhrov’s argument is certainly not unfamiliar, deriving from a well-trodden path led by intellectuals like Boris Groys or Slavoj Žižek. And yet, Chukhrov’s provocative cross-reading of continental and Soviet philosophy is a rare example of engaging transnational criticism. As such, her eclectic book contributes to a larger project of resuscitating Soviet Marxism to uncover blind spots in contemporary anti-capitalist discourse.

For Chukhrov, Soviet socialism serves as a prism outside of capitalism ‘from which one can see how the aberrations and fallacies in the critique of capitalist subsumption are overlooked by the token of their own entanglement in the logic of capital’ (21). Soviet socialism, a zone of radical anti-capitalism, is marked by concepts that are defamed as metaphysical since post-structuralism: ‘the good’, ‘the universal’ (vseobshee), ‘the ideal’, ‘reality’, ‘de-alienation’. Chukhrov seeks to revalorize these concepts as materialist notions emerging from different fields of Soviet culture in the 1960-70s, including philosophy, psychology, art theory, film, and sexuality.

As the title reveals, Chukhrov is particularly interested in two aspects of Soviet socialism: desire and boredom. For a libidinally conditioned capitalist subject, socialism as a non-libidinal economy appears boring and unsexy. Chukhrov makes the contestable claim that from the inside of the socialist experience, however, everyday life was perceived as the full realization of communist ideals; in short, for Chukhrov, Soviet socialism was practicing the good. The tension between boredom and desire, economy and sexuality, loosely guides through the four parts of her book (I. Political Economy; II. Sexuality; III. Aesthetics; IV. Philosophy).

In his Foreword, Groys claims that the Western Left ‘still wants to remain in the West – and, thus, it is still defined by Cold War divides’ (11). To overcome these ‘epistemological gaps’ and the nationalization of the Soviet experience, Chukhrov aims to reanimate the universalist and global dimensions of Soviet socialism. In fact, Soviet society provides the only model of a society in which private property was successfully abolished in favor of the common good. Chukhrov investigates how this radical socio-economical shift led to a non-libidinal society where idealist expectations were concretely enacted. In this regard, Soviet socialism created a specific yet universalizable ‘discursive paradigm’ (92) with its very own epistemological, aesthetic and sexual mechanisms.

Already the first chapter in Part I, ‘Aberrations in Anti-Capitalist Critique: Desiring Alienation’, convincingly introduces one of the book’s main arguments: that contemporary anti-capitalist theory suffers from a perverted desire for alienation. Examining works by thinkers such as Deleuze and Guattari, Chukhrov argues that post-structuralist theory at its core affirms capitalism and thereby sabotages true emancipation. By transforming capital itself into the ‘desirable terrain’ of subversion, Deleuze and Guattari’s Capitalism and Schizophrenia (1972), for instance, intensifies alienation and expresses an impossibility to overthrow capitalism.

Referring to Marx’s Economic and Philosophic Manuscripts of 1844, Chukhrov claims that this libidinal desire for alienation fundamentally breaks with Marx’s theory of alienation. Whereas Marx emphasized that the desired fetish object is conditioned by and ‘decodable within the logic of production’ (31), post-structuralists like Deleuze and Guattari mistake the phantasmatic desire for alienation as preceding and thus subverting capitalism. Throughout the book, along with close readings of Marx, Chukhrov persuasively shows how Soviet Marxists such as Evald Ilyenkov, Merab Mamardashvili and Lev Vygotsky seriously question the kernel Western anti-capitalism inherited from psychoanalysis, linguistic idealism and post-structuralism.

Chukhrov’s analysis of Soviet B-films that draws on Agamben’s concepts of metanoia and halo is a stimulating yet not uncontroversial piece of film-philosophy. Through the lens of socialist film, Chukhrov examines why Western audiences are repulsed by the depicted social realia. Why, Chukhrov asks, do capitalist subjects watch these films with feelings of pity and repulsion? Chukhrov claims that it is not the poverty and squalor we are repulsed by but equality. From a capitalist perspective, the ‘erasure of the difference between poverty and welfare’, a concrete achievement of Soviet socialism as mirrored in popular films, is perceived as abnormal (116). But is the poverty we see on screen and that people suffered during Soviet times really merely the product of our Western gaze seduced by consumerism?

In Part II, Sexuality, Chukhrov brilliantly proves the claim to be ‘one of the most important feminist theoretical voices to emerge in post-Soviet Russia’ (Malabou). Chukhrov’s analysis of sexuality in socialism opens with a sharp criticism of Judith Butler’s gender theory. As Chukhrov argues, Butler’s notions of gender, melancholy, performance, and subversion are deeply rooted in the logic of capitalist economy and thus not fully applicable to former socialist societies. Chukhrov’s main criticism is that Butler understands subversive deviation and emancipation from alienation as an individual trouble rather than a collective struggle. A consequence of this ‘lack of commons’ (129) is a fatal atomization of social discourse: rather than a tool for communality, language is misconceived as a ‘Big Other’ (125) hostile to our individualized identity production.

In eye-opening readings of Soviet psychologist Lev Vygotsky, Chukhrov deconstructs some of these unwittingly capitalist notions of desire, the unconscious, and freedom. Vygotsky’s non-structuralist approach to language and desire, in Chukhrov’s view, offers a timely critique of Freudian psychoanalysis by relocating desire from the unconscious into social reality. Soviet Marxism, in sharp contrast to psychoanalysis, grounds sexuality in consciousness (or discourse) which makes it a collective and material matter. Through the prism of Andrei Platonov’s pamphlet Anti-Sexus, Chukhrov claims that sexuality in Soviet socialism was ‘de-sexualized’ (151); sex had lost its phantasmatic ‘surplus charm’ (144) and turned into a mere mode of production.

Part III, Aesthetics, reconstructs Mikhail Lifshitz’s discussion of Hegel’s aesthetics in relation to Soviet realism. In the footsteps of Groys (2011), Chukhrov aims to rehabilitate Socialist realist art as a radical practice of de-alienation rather than a mouthpiece of Stalinist propaganda. As Chukhrov wonderfully elaborates, Lifshitz unveils supposedly subversive strategies in modernist art ‘as arbitrary gestures that were merely the flipside of bourgeois consciousness’ (189). In contrast to modernism’s elitist hubris, realist or classical art incorporates the artist’s ‘zealous selflessness’ (216) and ‘human resignation’ (190) when confronted with reality. In this sense, Chukhrov concludes, classical art is communist art par excellence.

Part IV is dedicated to Philosophic Ontics of Communism, focusing on the work of Evald Ilyenkov. Chukhrov’s fascinating interpretation of Ilyenkov sets up the philosophical base of her book’s argument. It is here where Chukhrov convincingly attacks the metaphysical axioms of object-oriented theories, accelerationism, speculative realism, and posthumanism. In contrast, Ilyenkov’s ontology is presented as a productive fusion of Spinozist monism and Marxian dialectics into a unique materialist idealism. Chukhrov’s cross-reading of Ilyenkov and Deleuze’s Spinozism is highly interesting. For Ilyenkov, as Chukhrov concisely presents, the ‘ideal’ is the purposeful, non-individual aspect of human labor (261). The ideal, deriving from Hegel’s notion of otherness or non-self, overcomes the split between self and world.

Unlike the post-structuralists, Ilyenkov conceptualized language as concrete action and labor rather than an ideal superstructure. Meaning thus results from labor and the manual engagement with material processes. With regard to Ilyenkov’s innovative work at the Zagorsk school of deaf-blind education, Chukhrov explores this material-ideal philosophy of the ‘thinking body’ (282) as a ‘cosmological humanism’ (242), offering a revelatory alternative to contemporary visions of a future after humanity (Meillassoux 2009). She comes to the conclusion that Ilyenkov’s vision correlates to what she calls the ‘noumenalization of objecthood’ (305), this is the philosophical quality of material everyday life in Soviet socialism.

Practicing the Good is both a stimulating introduction into Soviet Marxism and a persuasive critique of contemporary anti-capitalism’s thirst for acceleration, atomization, and alienation. While opening up many new territories of critical debate, this book will most likely be read controversially. In fact, Chukhrov’s attempt to reclaim the forgotten emancipatory aspects of Soviet socialism can be misconceived as a somewhat romanticizing view on historical socialism. While a critical stance toward some of Chukhrov’s claims is certainly productive, such a misconception could not be further from what her impressive book actually offers. To conclude, Practicing the Good is an invaluable read for anyone interested in how Soviet Marxism of the 1960-70s can re-evaluate our view on contemporary capitalism.