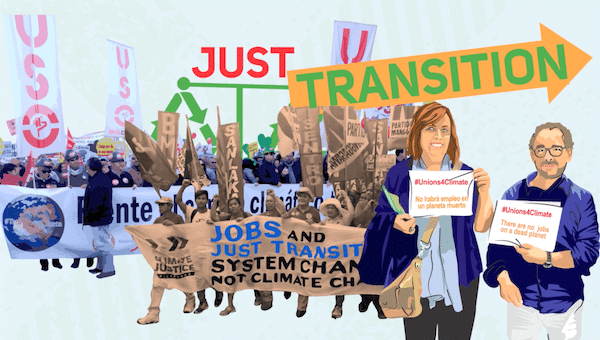 Mobilizing the global labour movement for climate justice and just transition is one of the defining challenges of our times. However, for workers in many sectors, it is unclear how climate issues will affect them specifically, and how they should respond. To date, much of the debate around just transition has focused on workers in industries that are facing job losses. These struggles are important. But in order to build a transformational vision that can mobilize workers in all sectors from the ground up, we need to understand a wider array of industry perspectives. 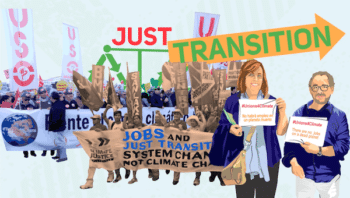 In this essay, I will discuss three issues. First, I will make the case for why climate justice and just transition are fundamental issues for the labour movement. Second, I will review debates around just transition, and particularly the contrast between worker focused and structural transformation approaches. I will argue that we need to build a bridge between the two perspectives, particularly in scenarios where it is important to engage workers about the future of their specific industries. Third, I will analyse three different scenarios from the transport sector that illustrate the various challenges that workers face: public transport as an example of industry expansion, aviation as an example of industry contraction, and shipping as an example of industry adaption.

Mobilizing for climate justice means addressing the immense threat of global warming and anthropocentric climate change. The scientific consensus presented by the Intergovernmental Panel on Climate Change is clear. Average temperature rises must be contained to 1.5 degrees, otherwise we face mass loss of life for humans and mass extinction of other species. To stay within the 1.5 degree limit, global greenhouse emissions must fall by 45% by 2030, and to net zero by 2050.

Until now the response of all societies, but particularly the leading capitalist countries in the ‘Global North’, has been grossly inadequate. A report released by the UN general secretary in February 2021 found that governments have only committed to a 1% reduction by 2030. We need faster action, and there are four reasons why this is a trade union issue.

The first reason is clear: the threat to life and livelihoods means that it is a fundamental social justice issue.

The second reason is just transition. Social justice and a good life for all people in the present is as important as preserving life in the future. As societies move to confront the climate crisis, the fundamentally unequal structures of these societies will be made worse, and the less powerful will suffer more. In the transport sector, threats to safety from increasing turbulence in the skies and storms at sea are just two examples of how workers are on the front line of the new risks created by global warming.

The third reason is that climate justice can only be achieved through mass action by workers and the labour movement. Confronting the climate crisis can only happen with the bottom up engagement of workers and communities.

The big gap here is the vital role that workers will have to play in making the transition work in practice. As we have seen during the COVID-19 pandemic, the skills and expertise of many workforces are undervalued and overlooked. The transition to decarbonization in many sectors will be difficult, and tapping into these skills will be necessary if the transition is to work in practice. Organized workers are the best way to mobilize these skills, and therefore trade unions need to connect members with these issues.

At the moment, the active role of workers is largely an afterthought in dominant policy approaches, particularly the neoliberal frameworks of state and capital, but also in left alternatives such as degrowth and green new deals. Although the left alternatives attempt to address the unequal outcomes that workers face, they have not done enough to conceptualize the active role of workers in making a just transition happen.

The fourth reason is that just transition is one of the key battlegrounds for building a fairer society. This is about more than defending what the working class currently have. Ever since the 2008 financial crisis, we have faced a paradox. The economic, political and intellectual basis of neoliberalism has been crumbling, and yet without a compelling alternative, neoliberalism continues to pervade economic and social life. The climate crisis is an external shock that is jolting society toward a different system, but what kind of system is unclear.

If trade unions are active on climate justice, we can make sure the transition transforms our societies into something fairer, more caring, and more equal. But unions need more than bold ideas and smart policy. We also need ways of engaging and mobilizing our mass membership. Being at the decision making table is one thing; we also need to bring power to the table.

For unions, therefore, the politics of just transition is about more than protecting workers and communities. It is also the question of how we mobilize workers to take action on climate issues. Up until now, debates over just transition have suggested two different ways to do this: the worker focused approach and the system change approach.

Unions have put forward a number of different solutions to mitigate against job losses, ranging from seeking to delay the shutdown for long as possible (as in the German coal industry) (Galgóczi, 2020), negotiating access to retraining schemes, redeployment to other jobs–perhaps with guarantees about pay levels, skill levels, union rights, and relocation packages–and cash compensation. The ILO guidelines on just transition also provide a framework that emphasises the importance of social dialogue with a tripartite framework (ILO, 2015).

A major weakness with all of these measures is that it is hard to guarantee that workers in good union jobs will receive an equivalent job at the same skill level. Due to the complex factors that making up working lives, there is little guarantee that workers will end up in a similar position in terms of their income, working conditions and job satisfaction. This is particularly the case with industries that are strongly tied to geographic regions.

Due to these difficulties, workers in some industries have low trust in just transition measures. Studies show that in some places and occupations, just transition leads to a negative reaction amongst workers, as they see it as synonymous with the destruction of their livelihoods and way of life with nothing comparable to replace it (Cha et al. 2020)

Some argue that we need a much more ambitious programme to transform the economy as a whole. According to structural change arguments, it is simply not possible to come up with viable solutions if we look at these industries in isolation. The only way we can address the twin challenges of rapid decarbonization of the economy and full employment is by building an entirely new system.

Sweeney and Treat (2018) of Trade Unions for Energy Democracy argue for a social power approach that calls for a decisive shift away from the neoliberal economic model based on incentives for private sector investment. Instead, they argue, we require a radical shift toward public ownership, control and investment, as this is the only way that decarbonization targets can be met. Furthermore, only by thinking about just transition at the system level, as opposed to needs of specific groups of workers, can we generate the changes that are necessary in order to build a sustainable economy that is capable of providing decent livelihoods for the entire working class.

Arguments for a Green New Deal have a similar logic. There are many different versions of the Green New Deal, but all involve a vision of structural change based on state investment in priority industries (decarbonization), and asserting democratic control of public financing. In the most worker friendly versions, they involve requirements for job creation with strong labour standards, including wage policy (UNCTAD, 2019).

According to this line of argument, we need to think about just transition for society as a whole, and not become trapped in sectoral perspectives that stop us seeing the big picture. Visions of bold structural change are important for engaging workers around climate justice. Problems, arise, however, if the big picture becomes too abstract, and too far removed from the reality of workers’ existing jobs and occupational identities, which are often central to trade union mobilization.

Part of the issue here is that just transition debates have focused heavily on workers facing industry shutdown or industry contraction. Workers in other sectors face quite different scenarios, which in turn require different strategic responses.