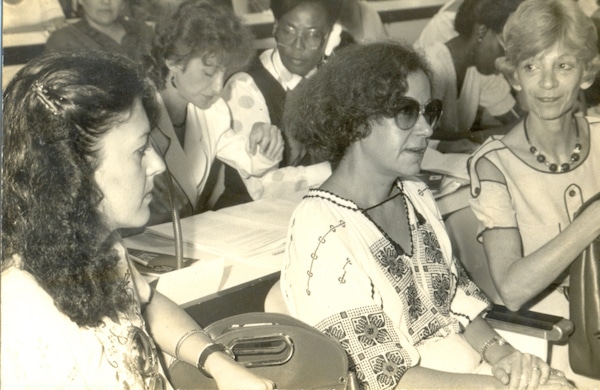 This blog post is a reduced version of a book chapter published as Antunes de Oliveira, Felipe. “Who Are the Super-Exploited? Gender, Race, and the Intersectional Potentialities of Dependency Theory.” In Dependent Capitalisms in Contemporary Latin America and Europe, pp. 101-128. Palgrave Macmillan, Cham, 2021.

In the classical works of dependency theory, such as the Dialectics of Dependency (Marini 2011 [1973]); Socialism or Fascism (Dos Santos 2018 [1978]); Dependency and Development in Latin America (Cardoso and Faletto 1979) and Latin American Dependent Capitalism (Bambirra 2012 [1978]), race and gender are absent. This absence is at odds with both the evident reality of racial and patriarchal oppression in Latin America and the concomitant rise of feminist and anti-colonial literature in the social sciences. In fact, in the exciting intellectual and political environment of the 1960s and 1970s, it would not be difficult to imagine productive dialogues between Ruy Mauro Marini and Margaret Benston, and Vânia Bambirra and Amilcar Cabral. Sadly, these dialogues never took place. Instead, the first generation of dependency scholarship privileged debates with white, male scholars engaged in modernisation sociology, structuralist economics and Marxist orthodoxy. With the sole exception of Vânia Bambirra’s forgotten writings about peripheral women’s liberation, gender and race remain to this day ignored by the dependency tradition.

Although the absence of race and gender does indeed represent a major blind spot in the work of dependency writers, the most seminal concepts coined by some of the early dependency writers such as Ruy Mauro Marini and Vânia Bambirra have ‘intersectional’ (Crenshaw 1989; 1991) potential. By that, I mean that they can be understood as referring to more than simply class-based dynamics of domination. Let us consider two examples: Marini’s concept of the ‘super-exploitation’ of labour and Bambirra’s definition of Latin American ruling classes as ‘dominated–dominant’.

The super-exploitation of labour is the most fundamental concept of the Marxist dependency school. The idea appeared in germ in the 1960s. In an article published in the Monthly Review  in 1965, Marini claimed that ‘the need to maintain production on an internationally competitive level’ is met by peripheral bourgeoisies through ‘low wages’ and ‘a high rate of unemployment’. In the Dialectics of dependency (2011 [1973]), Marini develops his argument, connecting the transition from absolute to relative surplus value in central capitalist countries to the inclusion of peripheral regions–in particular Latin America–into the world capitalist system (2011 [1973], 138). To keep international competitiveness in face of uneven exchange with central countries, peripheral bourgeoisies force ‘labour remuneration below its value’, constituting ‘a super-exploitation of labour.’ (Marini 2011 [1973], 150).

The concept of the super-exploitation of labour shines a light on a crucial blind spot of classical Marxist political economy. In order for the costs of the social reproduction of working classes in central countries to grow steadily below productivity, the commodities they consume must come from somewhere else, where they can be produced at an extremely low cost. Lying below the ‘standard’ exploitation of labour in central capitalist countries, therefore, is a vast global mechanism of super-exploitation. Nevertheless, because of his exclusive focus on class, Marini failed to identify the most essential form of super-exploitation: unpaid reproductive work in the household, largely done by women. Marini’s silence about gender is even more puzzling considering that Margaret Benston was making very similar arguments in the same Monthly Review (2019 [1969]).

Vânia Bambirra is the only original dependency writer to recognise the potential of combining anti-capitalist, anti-imperialist and women’s liberation perspectives. Indeed, it is particularly interesting to note how Bambirra uses the concept of super-exploitation in relation to women’s fight. If the super-exploited worker is remunerated below the value of his social reproduction, this reproduction must be provided outside of market relations. This means that yet another, invisible, social layer of super-exploitation exists below the peripheral working class–namely, working women in the Global South. Working class women have, therefore, very little to win from integration into capitalist working relations, a banner repeatedly raised by liberal feminists in the Global North. As Bambirra claimed, ‘[i]t is clear that capitalism, no matter how hard it tries, has nothing more to offer to this superexploited social category [women].’ (1972, 78).

Bambirra’s contribution to critical political economy goes well beyond the extension of the concept of super-exploitation to women. Responding to the early critiques of Marxist dependency posed by Augustin Cueva, Octavio Rodriguez and Enrique Semo, Bambirra defined Latin American bourgeoisies as ‘dominated–dominant’ classes (1978, 104). As such, peripheral bourgeoisies are deemed unable to confront imperialist interests and support potentially disruptive national development strategies. The explicit attention paid to the complex imbrication between international relations and class analysis proposed by Bambirra actually addresses the most common misunderstandings of dependency theory in the Global North. Indeed, dependency is often represented as a form of ‘external’ economic determinacy, leaving no room for the agency of subordinate classes in the periphery. This reductive interpretation of dependency, normally based on a superficial reading of Gunder Frank (1966), is explicitly rejected by Bambirra:

It is necessary to insist that the great theoretical contribution of dependency has been to demonstrate that this is not solely an international relations phenomenon, of trade exchange that is unfavourable to less developed countries; instead, it is the internal relations that conform a socio-economic structure whose character and dynamic are conditioned by imperialist subjugation, exploitation and domination (1978, 99)

What Bambirra missed was the importance of racism in the formation of the self-image of dominated–dominant classes in the global periphery. In fact, only by representing themselves as ontologically parted from the bulk of the non-white population and as essentially connected to their remote European origins can dominated–dominant classes perform the cruel task of imposing super-exploitation upon their fellow citizens. Continued super-exploitation is, therefore, premised on a level of dehumanisation of the working classes that is operationalised through systematic racism–a point which both Bambirra and Marini failed to identify. This connection is clarified in the writings of anti-colonial authors of the same period, who had fundamentally similar understandings of the role of the ruling classes (e.g. Fanon 2004 [1961], Cabral 1979 [1960]).

It is true that key Marxist dependency theory’s concepts such as the ‘super-exploitation’ of labour and ‘dominated–dominant’ classes were originally coined in abstraction of gendered and racialised forms of oppression. Nevertheless, they overlap with similar ideas found in the feminist and anti-colonial literature of the same period, opening possibilities for a new generation of dependency scholars wishing to fill in the gender and race gap in classical dependency and establish fruitful dialogue with contemporary anti-racist and feminist authors

One of the most important limitations of early Marxist dependency theory is the gap between bold, revolutionary discourse and practical political activism. The acute awareness that the global capitalist system is based on the exploitation of the periphery led radical dependency writers to openly advocate revolutionary anti-capitalist alternatives. Without denying the importance of keeping a post-capitalist horizon open, it could be argued that concrete, daily struggles against varied forms of oppression may end up overlooked in favour of grand international revolutionary endeavours that seem ever more elusive.

However, if women and non-white populations are the super-exploited and rarely form part of dominated–dominant ruling classes, anti-racist and anti-patriarchal struggles have anti-systemic effects, potentially undermining the very material foundations of dependency. In other words, considering the racial and gender aspects of dependency, the only way to end super-exploitation and topple dominated–dominant ruling classes is through the economic and political empowerment of women and non-white populations. The challenge of a renewed, intersectional dependency theory is to reconnect these concrete fights to the bigger picture of historically unequal international economic and political relations.

Felipe Antunes de Oliveira is a Lecturer in Development/Global Governance at the School of Politics and International Relations at Queen Mary, University of London. He tweets at @Faobr.