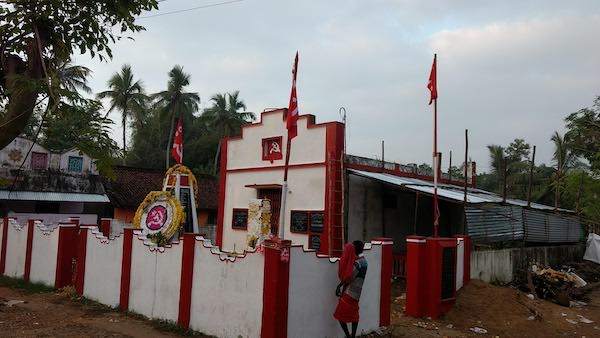 On September 8, 2021, at least five media houses and six offices of the Communist Party of India (Marxist) (CPI (M)) were vandalized in three of Tripura’s eight districts by the ruling Bharatiya Janta Party (BJP). These instances of violence come after a growth in the intensity of the Left’s political activity. While the center-right Congress Party is in a freefall and the Trinamool Congress (TMC) is busy in the reconstruction of its state unit, CPI (M) has been consistently engaged in building a strong social base. Through sustained protest campaigns against neoliberal policies, it has been highlighting the basic grievances of Tripura’s population.

The attacks against CPI (M)–in a crucial conjuncture of political struggle–reveal the inherent contradictions of liberal democracy. In §48 of Notebook 1, the Italian Marxist Antonio Gramsci proposed an important distinction between two modalities of modern-day governance. On the one hand, “the ‘normal’ exercise of hegemony on the now classic terrain of the parliamentary regime is characterized by a combination of force and consent which balance each other so that force does not overwhelm consent but rather appears to be backed by the consent of the majority, expressed by the so-called organs of public opinion”.

On the other hand, there are situations in which “the hegemonic apparatus cracks and the exercise of hegemony becomes ever more difficult. The phenomenon is presented and discussed in various terms and from different points of view. The most common are ‘crisis of the principle of authority’, ‘dissolution of the parliamentary regime’. Naturally, only the central manifestations of the phenomenon on the parliamentary or governmental level are described, and they are explained by the failure of the parliamentary ‘principle,’ of the democratic ‘principle,’ etc., but not the authority ‘principle’…Practically, this crisis manifests itself in…the ever greater instability of the governments”.

The interpenetrative interaction between force and consent corresponds to the texture of the distinction between political society and civil society respectively. In §38 of Notebook 4, Gramsci wrote that “[this] distinction is purely methodological and not organic” because it does not find actual confirmation “in concrete historical life”. As an example of this intertwined relationship, he speaks of “what is called ‘public opinion’” in § 83 of Notebook 7, noting that it “is tightly connected to political hegemony, in other words, it is the point of contact between ‘civil society’ and ‘political society’, between consent and force”.

Since hegemony is the specific linkage between civil society and political society, the moment of consent and the moment of force, civil society–far from being a sphere of freedom beyond the state, as is endlessly maintained by bourgeois commonsense–is an integral element of the hegemonic relations that structure the contemporary state. To establish and preserve the oppressed masses’ subalternity–their lack of historical personhood and political autonomy–the bourgeois state restricts mass activity in civil society to particular levels of passivity.

In §90 of Notebook 3, Gramsci argued: “The historical unification of the ruling classes is in the state and their history is essentially the history of states and of groups of states. This unity has to be concrete, and thus the result of relations between the state and civil society. For the subaltern classes unification does not occur: their history is intertwined with that of ‘civil society’, it is a disaggregated fraction of it”. In other words, the active production and reproduction of subalternity for some social groups is the structural foundation for any bourgeois ruling order, be it a liberal administration or a fascist dictatorship.

A system of political elites and passive citizenry is generated by the exigencies of legitimacy, which require that the dominant and leading class incorporate increasingly broader strata of its society in the national-popular framework–with the process of inclusion occurring in forms that definitively neutralize any threat of a graduated de-subalternization of the lower classes and their consequent transition to hegemonic politics. Thus, while subaltern social groups are present on the terrain of civil society, they occupy insignificant roles and positions, which led Gramsci to remark in §5 of Notebook 25 that “the subaltern classes, by definition, are not unified and cannot unify themselves until they become the ‘state’”.

Left parties are the social organisms that are responsible for the unification and historical subjectification of the subalterns–the process in which subaltern social groups stop being mere objects of contemplation for the discourses of the dominant classes and enact their self-representation through the formation of their own strata of organic intellectuals. This hegemonic project is the synthesis of political society and civil society, dedicated toward ending the unilateral determination of the latter by the former. When both the levels of society are unified in a political strategy, tactics are dialecticly dictated by the structural struggle for state control and the cultural-educational struggle for de-objectification.

The two aspects of the Left’s political strategy are a direct result of the objective mechanisms which determine consciousness–the material interests and articulated identities produced by social structures, arising through the practice and lived experience of subaltern agents. These agents are involved in relations, both with each other and with social structures and practices. The presence of structural determinations–primarily in the form of the restrictions imposed by civil society and political society–means that the Left’s political practices deploy a limited set of instruments upon certain kinds of raw material in a historically specific context against institutional resistance.

Hence, the Left’s hegemonic project is an articulated attempt to transform the existing structures and relations, to combine ethical-ideological goals of civil society with the strategic necessities of political society. Achieving dominance in political society crucially involves the objective elaboration of the independent position of the proletariat. In § 44 of Notebook 1, Gramsci said:

A class is dominant in two ways, namely it is ‘leading’ and ‘dominant’. It leads the allied classes, it dominates the opposing classes. Therefore, a class can (and must) ‘lead’ even before assuming power; when it is in power it becomes dominant, but it also continues to ‘lead’.

There can and there must be a ‘political hegemony’ even before assuming government power, and in order to exercise political leadership or hegemony one must not count solely on the power and material force that is given by government.

In other words, political dominance can only be grasped concretely in terms of the unity between state power (a relation of power, the domination of one social class over another), and the state apparatus (the institutional machinery in which the relation of state power is crystallized). The logic of the aggregation and disaggregation of class alliances–with the potential to determine the predominance of one form or the other in the course of the revolutionary transformation–should be directed by this ultimate objective; i.e., political leadership of the revolutionary movement of the people as a whole.

Considering the dialectic between force and consent, political society and civil society, it becomes clear that the CPI (M) in Tripura is engaged in a popular-democratic struggle aimed at the construction of the broad-based hegemony of progressive forces. The orientations of this dynamic are defined by a commitment to proletarian self-emancipation–the operation in which the antithesis of subalternity is forged and sustained not through a purely pedagogical and abstract assertion of working class independence but through political struggle embedded in determinate organizational forms. These movements are undergirded by the politically concrete formulations of relations of classes as constitutive components of a new historical bloc, as opposed to their perception as mere structural connections between sociological objects. How these developments will play out depends on the future amalgamation of forces in complex, uneven and contradictory conjunctures.