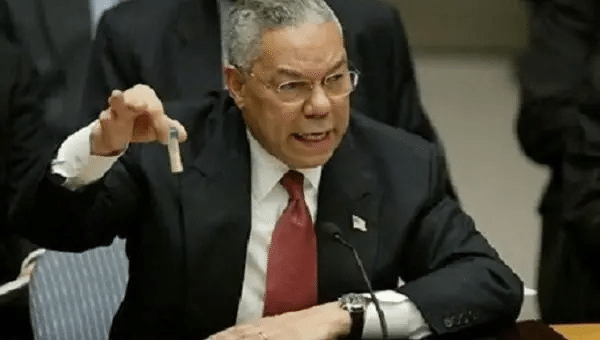 Colin Powell, a former and the first African-American secretary of state, died at 84 of COVID-19 complications on Monday morning. He died despite being fully vaccinated.

Yet he was best known and most controversial when he served as secretary of state under former President George W. Bush between January 2001 and January 2005, regarding his push for the U.S.-led invasion of Iraq in 2003 under the excuse that the Middle Eastern country possesses weapons of mass destruction, which was never proven.

In an address to the United Nations (UN) in Feb. 2003, Powell presented what the U.S. intelligence community claimed was proof that Iraq had cheated on inspectors and hidden the weapons of mass destruction (WMD).

The Iraq war that Colin Powell helped get us into: U.S. sanctions killed 550,000 Iraqi children under the age of 12.

Sanctions rarely, if ever, affect the government of the country being sanctioned. pic.twitter.com/Apj2I7q58k

The United States launched a war against Iraq six weeks after Powell’s speech, and eventually toppled Hussein’s government. Such WMDs, it turned out, were never found in Iraq, and a report published in 2005 by a presidential commission said the intelligence community’s assessment that Iraq had WMD capabilities before the U.S. invasion was “dead wrong.”

“This was a major intelligence failure,” said the Commission on the Intelligence Capabilities of the United States Regarding Weapons of Mass Destruction in the report.

In September 2005, Powell, who had stepped down from the post of secretary of state, confessed in a television interview that his 2003 UN speech was a “blot” on his record that would never go away. Born in New York City to Jamaican immigrants, Powell is survived by his wife and three children.

On this day in 2003, millions of people around the world marched against the U.S. invasion of Iraq. pic.twitter.com/wSAZa63dEn