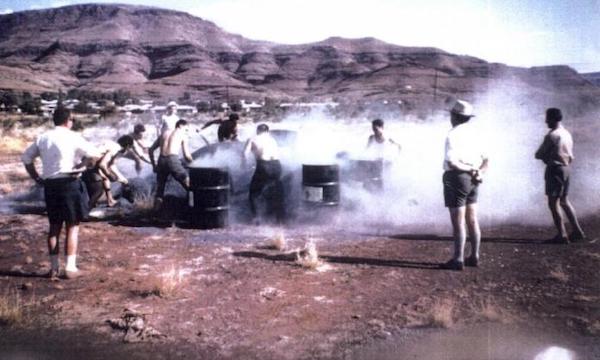 Wittenoom is an abandoned town in the desert north of Perth. Once, it had a population of almost 1,000, making it the biggest town in the Pilbara. Now, it’s been removed from maps and cut off from all essential services, to stop people from visiting. Wittenoom is a kind of Australian Chernobyl, poisoned not by radioactivity but by the deadly blue asbestos dug up from the town’s mine, where most of the population worked.

“People who lived and worked in Wittenoom in these years stress that  ‘We didn’t know’, ‘No one told us anything’”, reads a section of the Australian Asbestos Network’s website dedicated to the town.

They had no idea of the danger they lived with, nor of the suffering they would face as families decades later when, after the long latency period characteristic of the disease, mesothelioma would be diagnosed.

Wittenoom, the town so badly poisoned it was wiped off the maps, is an extreme case, but not an anomaly. Valuing profit above human life is the very basis of the capitalist system. It’s the reason so many people have died unnecessarily from the virus over the past eighteen months of the pandemic.

To most of us, the coronavirus represents a threat to our health and lives. To a business owner, it represents a threat to the flow of profits. Common sense suggests that a contagious and deadly virus should be fought with social distancing, closing down and refurbishing the places where we might catch the disease and pass it on. Lots of those transmission sites are workplaces, commuter systems and schools where children are trained to enter life in the capitalist system. So bosses have spent the last eighteen months pushing back against the idea that our health should come before the economy. Sometimes it’s relatively covert: consider the many decidedly inessential jobs and industries that have somehow been classified “essential” throughout the pandemic. For bosses, anything that makes money is essential. For them, avoidable deaths during a pandemic are essential too.

Beyond the pandemic, there’s an ineradicable tension between our health and our bosses’ interests. Bosses make more money when we work harder or longer. Entire industries are continually reshaped in the pursuit of that goal. The Monthly recently published a piece, “On the Chain”, investigating conditions among migrant meat workers. Recent changes to visa rules allowed bosses to impose more extreme conditions of exploitation on their workers. “The working day lengthened, pay fell relative to other jobs. Tasks were simplified and productivity increased.” These changes meant more accidents and illness. One worker is quoted complaining of severe pain in his hands due to the repetitive nature of his work removing hides from as many as 70 cows an hour: “”Even holding chopsticks or closing my fist, I have trouble”, he told the Monthly.

Time is money. So is equipment that can make workers safer. So, notoriously, many workers have worked through the pandemic without adequate personal protective equipment. According to one study from the University of Berkeley, provision of masks to workers in the United States in March and April 2020 was dire:

4% of fast-food workers, 5% of convenience store and coffee shop workers, and 9% of restaurant workers [had access to masks]. About a quarter of workers in retail and grocery stores had access to masks, as did around 15% of those in bigbox and department stores. Here, too, the workplaces that back-stop the online economy fell short: just 17% of warehouse, 14% of fulfillment center, and 10% of delivery workers had access to masks.

And some of the most profitable industries can never be made healthy for humanity—fossil fuels being a pressing example. It’s profitable to discover, invent and market addictive and poisonous substances: tobacco, alcohol, fast food and the over-prescription of dangerous medication have all made fortunes for bosses.

Bosses are constantly trying to find new ways—and holding on tight to old ways—to kill us. The struggle between life and health, on the one hand, and profit, on the other, is one of the defining features of work and life under capitalism. That’s the tension that made Wittenoom disappear.

Long after the Wittenoom mine was closed, the town became the inspiration for Alistair Hulett’s song “Blue Murder”:

I feel my health is failing
Working down in the thick blue dust.
The kids play in the tailings.
The boss says work, and work I must.
Day in, day out, everyday they drive us harder.
Day in, day out, they’re getting away with blue murder.

The song could have been written about many places where people still live and work. The kids in Broken Hill, for example, still play in poisonous tailings—waste products from the mines. In 2017, 47 per cent of all children and 79 per cent of Aboriginal children in the town had an amount of lead in their blood above the official “threshold of concern”. Lead dust from mines was blown all over the town. It contaminates the soil and makes the rain water undrinkable. It accumulates on surfaces in playgrounds, finding its way onto kids’ hands and into their mouths. Kids in Broken Hill are eating lead.

What action has been taken to punish the mining companies operating in Broken Hill for poisoning the community? The government has preferred to launch campaigns of “awareness”, teaching parents and children to wash their hands after playing in playgrounds or touching the soil. Similar programs have been implemented in Mount Isa and Port Pirie, mining towns also suffering from lead poisoning. All of them have been criticised as dangerously misleading in a study by Macquarie University academics published in the journal Environmental Research.

“With slogans such as ‘Lead, it’s in our hands’ and ‘Living safely with lead’, the cities’ health education programs all promote the idea that parents can sufficiently protect their children from lead exposure through individual actions, such as hand washing, household cleaning, and taking precautions in the garden”, the academics wrote.

Yet there is no evidence to show that’s true.

Broken Hill’s “lead awareness” has a mascot. He’s called Lead Ted Junior. Lead Ted Junior tours classrooms and teaches kids to wash their hands of lead, while parents are kept unaware that the World Health Organization warns “there is no known level of lead exposure that is considered safe”. In reality, the mines would need to be shut down to eliminate the health risk. Their profits are the reason this has not even been considered. There are comparisons that can be drawn to the pandemic here: Isn’t “Living safely with lead” eerily similar to the government’s favourite mantra at the moment: that we have to live with Covid in order to open up the economy?

Broken Hill is an example of a mass poisoning de facto sanctioned by the government, but in one of the most infamous mass poisonings in recent years, government was the immediate perpetrator. From 2014 to 2019, the people of Flint, Michigan, suffered a “water crisis”. The mostly African American population had their water supply poisoned with chlorine and lead. The area’s industrial history meant the Flint River was toxic, badly polluted by bosses past and present. But during a period of budget cuts, the city’s water supply was switched to the river anyway. Residents complained of orange and brown water that was undrinkable, so the water supply was switched again. But anti-corrosion measures hadn’t been implemented, so the old water pipes leached lead into the drinking water. The people of Flint were drinking lead.

Poisoned towns and neighbourhoods are not usually evacuated or shut down. In fact, Wittenoom’s residents mostly left of their own accord, migrating family by family as lung diseases claimed a rapidly growing tally of victims. The deadly effects of asbestos began to be uncovered in the early 20th century, and asbestosis was discovered in 1930, but the industry covered it up to keep profits flowing. Wittenoom’s mine was shut down decades later, in 1966, not because it was killing people, but because it wasn’t making enough money any more.

The asbestos industry didn’t just knowingly send workers into death traps; it also lined their homes with poison. The asbestos from Wittenoom’s mine was sold to James Hardie Industries, a company that manufactured building materials. Hardie’s asbestos-contaminated supplies were used in construction jobs all over Australia, inflicting debilitating and deadly lung diseases on manufacturing, construction and maintenance workers, on their friends and relatives who were exposed to dust and on others who worked around the sites.

Yet the company is making a reputational comeback. In February of this year, the Australian Financial Review published an article titled “James Hardie goes from pariah to high-flyer”. “The rising popularity of its fibre cement board for renovation and construction projects and the ability to turn that into fatter profit margins pushed building products group James Hardie Industries to a record high on the ASX on Tuesday”, the article gushed. Meanwhile, their old asbestos keeps claiming new victims. Asbestos removed from buildings is sometimes dangerously dumped, contaminating soil for decades to come. Houses that contain asbestos are often demolished without adequate protection for workers and nearby residents. People engage in home renovations in contaminated houses, not knowing they are creating clouds of deadly asbestos dust as they knock through walls. It’s possible that some of the asbestos claiming new victims today was dug up in the Wittenoom mine: it was the country’s major domestic supplier of blue asbestos in the 1950s and 1960s.

The struggle between human life hand on the one hand, and profits on the other, isn’t just a few horror stories. It’s built into the system, and new horrors will keep emerging until we create a new way to organise our work, our lives and our relationship with the environment. Bosses are still getting away with blue murder.