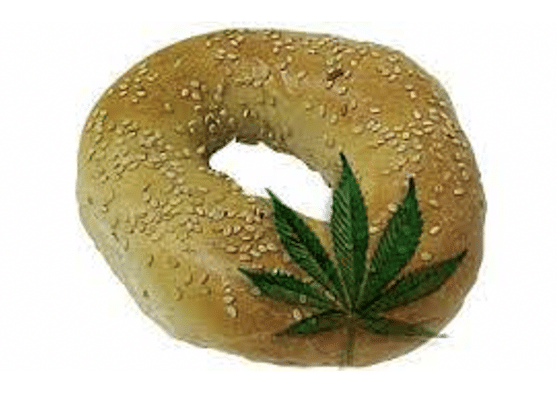 I did not go to the town of Sonoma to buy bagels, but while I was there for a meeting of the Sonoma Valley Cannabis Enthusiasts (SVCE), I figured I might as well buy half-a-dozen. The bagels at Homegrown are some of the best in northern California, in part because the owner, Stuart Teitelbaum, who was born and raised in Manhattan on the Lower East Side, and grew up eating bagels and bialys. Stuart, who has a keen sense of humor and who calls himself “the Shaman of the Board,” knows what a real bagel is supposed to taste like and look like. He knows, too, that a good bagel is boiled and then baked in an oven at 500 degrees. They’re unlike the ersatz industrially-produced  bagels that are available at chains. I won’t mention names.

Stuart didn’t learn how to make bagels until he quit New York and moved to California, first to Monterrey, where he apprenticed to a bagel maven, and then to Sonoma, where he opened his shop forty-three years ago. Stuart arrived in Sonoma at about the same time I arrived in the county. While he baked bagels, I taught literature and law and learned that it’s easier to make a good bagel than to encourage a college student to think critically and imaginatively. That was my experience, though there were notable exceptions.

In the beginning, one of Stuart’s bagels cost 25 cents. Now a bagel is $1. Soon after he opened Homegrown, Teitelbaum took liberties with bagel tradition. His bakery offers a big selection, along with the old standbys. Those bagels are: jalapeno salsa, sun-dried tomato basil, spinach Parmesan, apple honey cinnamon, blueberry and cranberry. Uncle Jake Sokolowski, who owned and operated a bagel bakery in Brooklyn, New York, would turn over in his grave if he could see the list of unorthodox bagels on the menu at Homegrown, along with sandwiches like the un-kosher “BLAT” that has lettuce, tomato, avocado and, bacon.

Uncle Jake came from Poland, the birthplace of the bagel, which usually has a high gluten content which makes it both elastic and chewy. Legend has it that Jake walked around with lots of cash in his pocket which made him a target, and that he baked bagels from 5 a.m. to 8 a.m. and then exited through a back door that led to a dark alley.

Stuart usually isn’t secretive, though he told me he called his bakery “Homegrown” because he was cultivating marijuana. For the past four decades, he has relied on his assistant, Tony Peña, Senior, who grew up in Jalisco, Mexico—a land of milk, beef, corn, tortillas and tacos—and who discovered, soon after he arrived in Sonoma, that he loved bagels. He still does. For breakfast every morning, Tony has a buttered bagel. Occasionally, he will go wild and eat what Stuart calls a “Jewshi,” a bagel with cream cheese and lox. Tony, Jr., is learning the trade. Before long, all or at least most of the bagel bakers in California will be Latinos. They already make most of the pizzas.

With half-a-dozen bagels—sesame and poppy seed in the trunk of my car—I set off for the meeting in the Sonoma plaza of the Cannabis Enthusiasts, an organization of men and women who work in the cannabis industry, mostly as commercial growers, but also as dispensary owners and as guides who take tourists into the Mayacamas Mountains to visit pot gardens and plantations. I know most of the members, including Erich Pearson, who started off in the cannabiz in San Francisco, and Mike Benzinger, who made a fortune at the Benziger Family Winery, and who cashed out a few years ago.

Pearson owns dispensaries in San Francisco, Sebastopol and Santa Rosa. For the past four years he had been trying to open a dispensary in the town of Sonoma, a conservative place that wants to stay with the decades old prohibition against pot—and the tax dollars be damned.

Mike made a name for himself by growing grapes biodynamically. Now he grows cannabis biodynamically as well as plants like dandelion and ashitaba which he sells to a doctor who dries them, turns them into a powder, promotes them as super healthy foods and sells them online. Mike can’t grow enough ashitaba to supply the doctors. He also grows vegetables for Glen Ellen Star, the restaurant his son-in-law owns and where he does the lion’s share of the cooking. Mike could make more money growing ashitaba, which is native to Japan, than growing cannabis, but it’s hard to cultivate ashitaba in Sonoma.

Right now there’s a glut of marijuana on the California market and the price is dropping even as I sit here at my computer. At the SVCE meeting in the plaza, Doug Gardner explained that he had several hundred pounds of newly harvested weed and didn’t know what to do with them. Eli Buffalo, the son of singer-songwriter, harmonica player Norton Buffalo, thought he might be able to help Doug, who is the son of Fred Gardner, the editor of O’Shaughnessy’s, a publication mostly for doctors and health professionals who recommend cannabis to patients with ailments. Cannabis has helped Doug cope with epilepsy. Now, he’ll need a miracle if he’s going to survive as a marijuana farmer.

On my way out of town and back to the city, I stopped to visit my friend Paul W., who makes a good living growing vegetables. Sometimes I wonder how he does it. He has good soil, plenty of water, heaps of savvy about what crops to plant and what customers will buy at the open air markets. Plus his wife, Candi, sells the produce he grows, literally hand over fist. Paul gave me a few pounds of ripe tomatoes which he had just harvested and a dozen or so vegetable starts for my backyard garden in the city. Who says I can’t grow vegetables in cold, foggy Ocean Beach?

Born and raised on a cranberry farm in Wisconsin, Paul broke away from his family, and decades ago found himself as an artist and as a grower of lettuce, beets, carrots, cabbages, tomatoes, onions and lots more.

The field workers at Paul’s Produce on Arnold Drive are mostly Mexicans. So are the field workers at Benziger’s Glentucky Family Farm on Sonoma Mountain, and at Erich Pearson’s marijuana operation in Glen Ellen. Like Paul, Erich has a system that works: he grows what he sells and sells what he grows.

Erich employs more Mexicans than anyone else in Sonoma Valley, and pays his workers more than they’d be paid at a vineyard. Mexicans tell me they’d rather work on a marijuana farm than in a vineyard, where toxic chemicals are often used and where the harvest typically takes place at night when the men and women have to wear flashlights attached to their heads in order to see the grapes.

On the 101 headed South, I paid attention to the traffic and thought about the country and the city and what’s unique about each. Some of the things are obvious. In the country, people tend to be connected to the land in both deep and superficial ways, and to think about the land, perhaps more than they think about people. Country folk often regard the city as a place where culture is preeminent.

In both Sonoma and San Francisco, I have found a sense of superiority and swagger. In Sonoma, people think their valley is the preeminent place on the face of the earth. In San Francisco, I often encounter citizens who think that their city is the greatest urban center on the planet. I understand pride of place and terroir, but when pride turns into arrogance it turns me off. No place is as provincial as a city, whether it’s San Francisco, L.A., New York or Paris, where the inhabitants think and boast that they inhabit the best of all possible worlds.

When I got back to the city on September 16, my sister-in-law, who was born and raised in Mexico, said, “Happy Mexican Independence Day.” When I lived in Sonoma I celebrated that occasion on a farm owned by a prosperous white family and where most of the work was done by Mexicans. We drank beer and ate tacos. The whites made nice speeches about the Mexicans and the Mexicans made nice speeches about the whites, and then each group sat separately and didn’t interact. My sister-in-law celebrated Mexican Independence day with two friends at a bar where they drank margaritas. In my kitchen, I toasted one of Stuart Teitelman’s Homegrown bagels, buttered it, added slices of one of Paul’s ripe tomatoes and enjoyed a feast.