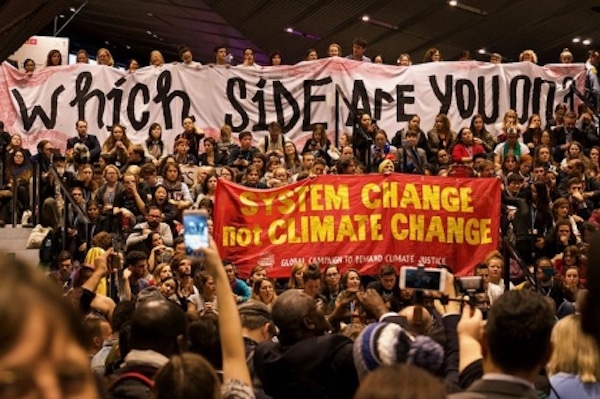 Glasgow prostest
With the upcoming COP26 to be held in Glasgow this November (delayed a year by the COVID 19 pandemic), environmental groups the world over urgently put pressure on governments for a solution to the climate crisis. Increasingly, they do not rest their hopes on the COP deliberations and Martin Empson explains why in his pamphlet, The Great Climate Cop Out, Why COP26 Will Not Solve the Environmental Crisis, published by the Socialist Workers Party in the UK. The 25 page pamphlet lays out concisely and effectively why we cannot look to heads of government under a capitalist system to come to an agreement on phasing out fossils fuels, cutting emissions and creating a more sustainable economy.
Empson explains that these leaders represent banks and industry who have a vested interest in the system as is and in continuing the use of fossil fuels. Beyond that, governments tend to support of programs, such as cap and trade, or net zero carbon offsetting, which are not only of questionable value in curbing climate change, but generate huge profits and can even incentivise increasing carbon emissions.
COP fails because of the basic inequities between the Global South and the Global North. The economies which are part of the Global North are responsible for most of the carbon emissions, but people in the Global South are impacted by them more, while the countries of the Global South have less influence to determine the outcome of decisions at the meetings.
The current programs supported by governments fail because they are based in a capitalist system of continuous growth, which is not environmentally sustainable. The COP talks themselves are actually sponsored by industry, often the fossil fuel industry. Ultimately, the talks fail to create solutions to climate crisis because governments have to move to replace fossil fuels with sustainable energy sources as soon as possible, and they have too much invested in fossil fuels to do this.
After setting the context for COP26 with a description of the state of the current climate crisis, with rising temperatures, unprecedented forest fires, droughts and famine, and a concentration of carbon dioxide of 417 p.p.m. not experienced in the previous 3 to 5 million years, Empson illustrates the aforementioned points with a brief history of COP negotiations.
The COP is the Conference of the Parties that were signatories to the United Nations Framework Convention on Climate Change, signed by 154 nations in Brazil in 1992. The Kyoto Protocol, which was in place from 1997 to October 2020 and was the best known agreement on climate emissions, came out of COP3 held in Japan in 1997. Environmental groups and activists the world over held high hopes for COP15 in Copenhagen in 2009, but Barack Obama arrived at the talks with the Copenhagen Accord in hand, signed by U.S., China, India, Brazil and South Africa. This side deal undermined whatever positive developments might have been possible at that year’s conference. More positively, at COP18 at Doha in 2012 it was finally acknowledged that the Global South should be compensated for climate damage. COP21 in 2015 generated the Paris Agreement which provided hope as delegates agreed to limit warming to below 2 degrees above pre–industrial levels. Unfortunately, this was non-binding, unenforceable, and ultimately not implemented by a majority of nations.
Having outlined the limitations for fighting the climate crisis under capitalism in the pamphlet, Empson finishes up by suggesting a different, more positive solution. Using the slogan that emerged in the protests around the COP in Copenhagen, he proposes ‘system change not climate change’. Karl Marx identified the metabolic rift between humans and nature under the capitalist system, where the relationship between humans and nature was destroyed by private ownership and nature became a commodity. The need for perpetual growth that is fundamental to capitalism is unsustainable, even in an economy where fossil fuels are phased out.
While the COP meetings are not effective, the mass protests around the world and around the meetings are in themselves meaningful, as they serve to pressure governments for better agreements, but more importantly, to build movements between environmental groups, the left, trade unions and others to dismantle capitalism and build a more democratic society from the ground up. These movements are pushing for sustainable economies, climate justice and climate jobs.
Find and download Martin Empson’s pamphlet, ‘The Great Climate Cop Out, Why COP26 Will Not Solve the Environmental Crisis‘ A bibliography is included.