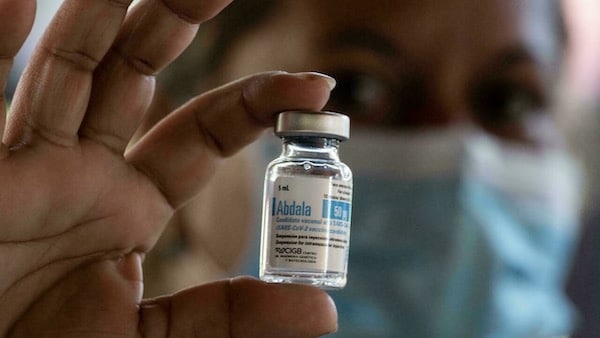 Cuba and Vietnam share a rich history of anti-imperialist struggles and are living examples of the daily battle against U.S. hegemony. During the pandemic, they are paving the way for South-South solidarity and enhancing local production, a must for a self-reliant Global South

Recently, Cuba and Vietnam made news for entering into a COVID-19 vaccine agreement. Unlike the agreements entered into by Western multinational corporations such as Pfizer, Moderna and Johnson & Johnson, the Cuba-Vietnam agreement sets a precedent of solidarity and prioritizes people’s health over business profits.

The Caribbean country has promised to export a total of 10 million doses of it’s three-shot COVID-19 vaccine Abdala and the first shipment has already been sent. This is the first export from Cuba since it started manufacturing three of its homegrown vaccines–Abdala, Soberana-1 and Soberana-2. But the most important part of the agreement is technology transfer to Vietnam. With that, Vietnam will be able to manufacture the vaccine on its own.

“Vietnam is one of the countries recognized by WHO as having sufficient capacity in technology, techniques, production, human resources and raw materials to produce vaccines since 2015,” says Hien Nguyen who works on trade topics in Vietnam. Ministries of Health, and Science and Technology of the Vietnamese government decided early on to have domestically-produced vaccines for COVID-19. Looking at the acute shortage of vaccines that developing countries are facing, including the ones with production capacity, this was the most rational thing to do. The government actively negotiated with other countries and their companies for technology transfers for COVID-19 vaccines.

Other than Cuba, Vietnam has signed technology transfer agreements with Russia, the United States, and Japan. These countries are supporting the development of different technological platforms for the production of COVID-19 vaccines. But the contract with Cuba is the first one to kick in, and is especially interesting as it concerns technology transfer between two countries from the Global South.

“As we can see, the contract with Cuba is the first one that Vietnam has signed with a Southern country,” Nguyen stated.

Global South countries have the capacity to develop vaccines

Vaccines developed in the Western nations have remained out of reach for countries of Africa, Latin America and most of Asia. Companies such as Pfizer and Johnson & Johnson have prioritized selling their vaccine doses to countries in Europe and North America. Despite repeated calls for the expansion of production of their vaccines–which would require technology transfer to generic manufacturers–these companies have turned a deaf ear in complete impunity. As rich countries continue to block the TRIPS waiver at the World Trade Organization, they are acting hand in gloves with these companies. While countries such as the United Kingdom have reached 73% of vaccination and are now giving booster shots, Asian nations such as the Philippines have been able to vaccinate only 25% of their population.

COVAX, the vaccine pillar of ACT-Accelerator, a global mechanism led by the Bill and Melinda Gates Foundation, has failed terribly in ensuring vaccine equity for which it was said to have set up. To begin with, it promised to help vaccinate merely 20% of people in developing countries. So far, it has shipped only around 2% of the total target of 2 billion doses for 2021.

Thus, it has become important for developing countries to become self-reliant in securing enough doses of vaccines to not lose anymore lives due to the pandemic. Such efforts call for solidarity within countries of the Global South.

An example of South-South solidarity

Countries in Latin America are already helping each other by collaborating on research and development, manufacturing, and regulations and sharing their resources. The Cuba-Vietnam technology transfer is an expansion of that solidarity. By developing its local production, Vietnam will be able to meet not only its own vaccine needs, but will be in a position to export to other developing countries. So far, Vietnam has vaccinated 47% of its population with at least one dose.

When vaccines are developed in the Global South, they also use technological platforms that are more widely available for production in the south. For example, the Abdala vaccine uses protein subunit technology which is an old tested technology. It is easy to adapt and scale up.

“For equitable access to COVID-19 vaccines, cooperation around research and production capacity is critical for scale up. We need a more organized approach promoting local production and technology transfer. Low and middle income countries have research and production capacities and hence it won’t be difficult if there is will to do so,” said Sun Kim, Director, People’s Health Institute in South Korea and People’s Health Movement’s regional coordinator for Asia Pacific. She added that the Cuba-Vietnam agreement is an encouraging development in the promotion of local production and more such agreements would be welcome.

Vietnam is also investing in research and development of its own vaccines and has four promising vaccine candidates. Three of them are being developed by state-owned companies–Institute of Vaccines and Medical Biologicals, the Vaccine and Biological Production Company No 1, and Polyvac. The fourth candidate is being developed under a private company, Nanogen Pharmaceutical Biotechnology JSC. “Once Vietnam is able to produce vaccines by itself, there is huge potential that it will be able to export vaccines to other developing countries,” says Nguyen. So far, Vietnamese people as well as foreigners have been provided free vaccines by the government. The same is likely to continue going ahead.

Cuba’s support is not limited to the vaccine. Previously, it sent the Southeast Asian nation thousands of doses of Interferon Alfa 2B for treatment, and will cooperate in technology transfer of the medicine. This new collaboration will tighten trade cooperation between the two countries, outside a free trade logic. Vietnam already exports rice, coffee, chemical products, apparel, and footwear to Cuba, and primarily imports vaccines and pharmaceuticals. The new collaborations are a logical step in that direction.