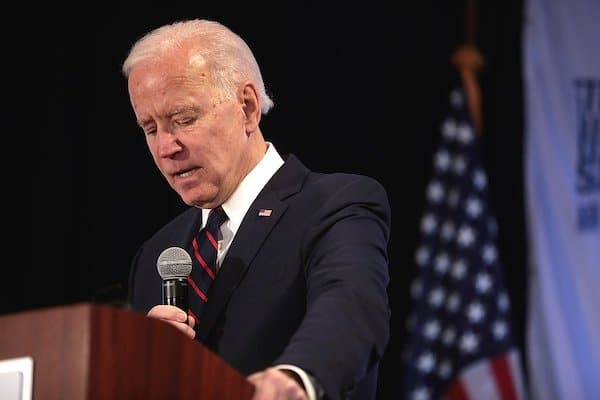 After spending weeks conducting backroom negotiations with Sen. Joe Manchin, Sen. Krysten Sinema and other right-wing Democrats in Congress over the social program budget, the Biden administration announced yesterday a “framework” that abandons some of the most important elements of the original proposal. As part of the administration’s capitulation to the right wingers, it has agreed to cut in half the total allocation to social programs–from $3.5 trillion to $1.75 trillion.

Biden’s shameful surrender stems from the fundamental approach he adopted towards this struggle. Instead of seeking to pile as much pressure as possible on the right wing holdouts within his own party, Biden voiced only the mildest of criticism. Biden remarked at a public event in Baltimore last week, “Joe [Manchin] is not a bad guy. He’s a friend.” And Biden did indeed treat Manchin like a friend, agreeing to his demands to cut from the budget a wide range of programs that would have provided major relief to workers.

This includes the complete elimination of paid family and sick leave. The United States is the only wealthy country in the world to not guarantee this type of leave, which initially would have been set at 12 weeks. Free community college has also been totally taken out in Biden’s new framework. The Clean Electricity Performance Program, perhaps the most crucial climate component of the original proposal, has been taken out to please the planet-killing coal industry capitalists. The CEPP would have invested $150 billion to facilitate the transition to a carbon-neutral economy.

Other components of the social program budget are still nominally present but dramatically dialed back. The tax credit that provides working class parents with $250-$300 monthly checks per child was only extended for one year, instead of being made permanent. $327 billion was originally meant to bolster affordable and public housing across the country, but that total was reduced to $150 billion. The plan to cut into pharmaceutical corporations’ profits by negotiating Medicare drug prices–and using the resulting savings to expand Medicare coverage to include hearing, vision and dental–has been dropped and only hearing will be added. Manchin and Sinema are so determined to line the pockets of their rich friends in big pharma that they’re willing to sacrifice elders’ teeth and eyes to do it, and Biden is giving in to them.

The Biden administration is heavily emphasizing that over $500 billion is allocated in his new framework for climate change related measures. But the majority of this would be spent in the form of tax credits that big corporations would be best positioned to take advantage of, and other subsidies aimed at bolstering “green” capitalists. It is unclear how much of this would actually make its way to concrete actions to reduce carbon emissions.

Childcare subsidies remain in the bill but they are subject to income and employment requirements. Universal pre-K has survived Biden’s capitulation intact. The administration is still paying lip service to including immigration reform measures in the bill, but Democrats are heavily signaling that they will simply drop this crucial priority when it is inevitably disqualified by the Senate parliamentarian. The Senate parliamentarian is an obscure, referee-type figure tasked with interpreting the chamber’s rules–but the parliamentarian’s rulings are non-binding and the Democrats could simply choose to ignore them without needing a single Republican vote.

No final vote yet

Biden had hoped to have his surrender framework quickly accepted by Congress, in time for the COP26 climate summit in Glasgow, Scotland this weekend. Fortunately, this did not happen.

Two major pieces of legislation are tied together. One, referred to in the media as the “bipartisan infrastructure bill”, is heavily weighted towards subsidies for businesses and is supported by some Republicans. The other is the social program budget. Right wing Democrats have been demanding the immediate passage of the “bipartisan” bill, but the Congressional Progressive Caucus has refused to do so unless the social program budget is passed simultaneously.

The Democratic Party leadership in the House of Representatives tried to force through a vote on the “bipartisan” bill on Thursday. But that effort had to be called off at the last minute when it was clear that the vote would not succeed.

However, the Progressive Caucus has indicated that they are simply holding out until actual legislative text is written, rather than demanding crucial programs are added back into the bil. CPC chair Pramila Jayapal issued a press release on Thursday stating, “The Congressional Progressive Caucus just overwhelmingly voted to endorse, in principle, the entire Build Back Better Act framework announced by President Biden today. We appreciate the President’s leadership and his commitment to getting this process over the finish line.” The statement explained that their refusal to vote in favor of the bipartisan bill that day was so that, “legislative text that can be fully assessed and agreed upon by all parties … There is too much at stake for working families and our communities to settle for something that can be later misunderstood, amended, or abandoned altogether.” Instead of fighting to reverse Biden’s capitulation, the Progressive Caucus is simply trying to prevent the social program budget from being eroded even further.

Biden and the rest of the Democratic Party had many tools at their disposal to force Manchin and Sinema to reverse their disgusting, anti-worker stand. They could have cut them off from campaign funds, removed them from their committee assignments, refused to consider any legislation they propose, supported primary challenges, or called for mass actions to add to the pressure. But instead they could barely muster the courage to even criticize the right wing duo in the media. Time is running out to reverse this shambolic retreat.