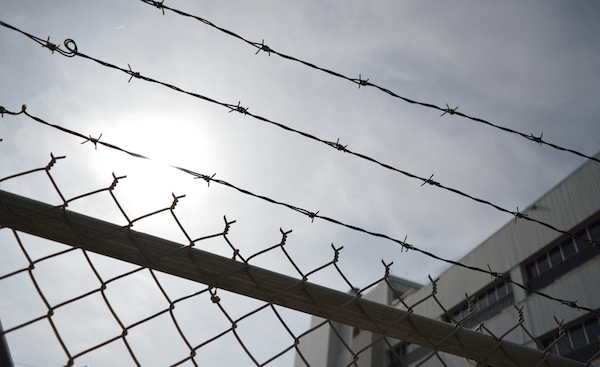 I was watching TV one night about four years ago when my friend Latrice bounced into the prison common area. She’d just gotten mail and found out her mom had finally saved enough money to bring her five kids to visit from Houston. She could barely contain her excitement. “I haven’t seen them all together in so long!” she exclaimed. Even though I didn’t have children, I understood the joy of visitation. My parents were also coming the same day, I told her. I hadn’t seen them in several months, as the almost four-hour drive from Kilgore to Gatesville was hard on them.

The next week, I walked into the strip room, where officers strip-searched us before visitation, elated to see my parents. Latrice was already there, in the process of removing her uniform for the officer on duty.

“It’s really sickening how you have all those kids and you choose to stay in here. Living wild with five children at home. How does that make you feel?” said the officer, an older woman, as she shook out Latrice’s shoes and threw them on the floor. (Latrice’s name has been changed to protect her privacy.)

My appearance turned the officer’s disgust toward me. “Offender, you stand over there! Stop crowding me while I’m doing this search. Do you want me to refuse your visit?” I felt my chest tighten with rage. I hadn’t done anything wrong. “No, ma’am,” I said and put my hands behind my back and retreated to the farthest wall as Latrice stood naked, holding out her uniform and undergarments to be searched. The officer snatched them from her hand and shook out each item. The berating quickly resumed. “I checked in all those kids and thought, ‘Jesus, what a selfish girl you must be to keep having babies and dumping them on your momma,’” she said. Latrice remained impassive, her eyes glazing over with an emptiness I knew well. I could feel our collective joy about visiting our families seeping out of us.

I watched Latrice’s unemotional face as she got dressed. I knew what she was thinking:

God, please don’t let this officer talk to me like this in front of my family.

After I was searched, the door opened and I saw my elderly parents sitting near the window. A beam of sunlight bathed the table in a warm glow. I smiled, and they rose to greet me for our one allowed hug. We were still settling into our seats when I heard the door open again. Latrice walked out and nervously scanned the room for her family. “Mommy!” a little girl cried, darting from the corner where an older woman sat huddled with four other children. “Baby!” Latrice dropped to her knees to embrace her youngest daughter, who had started sobbing. The tenderness of the moment transported me beyond prison, to times of unguarded happiness. Latrice suddenly looked vibrant and alive.

But then a familiar, booming voice cut in. “Offenders will sit at their designated table. Visitors will keep children under control!” the officer shouted. She flew around the tables, bumping into other visitors, as she made her way to the frightened child. “I’m sorry, she was excited. It won’t happen again,” Latrice said. The officer pointed her finger in the 5-year-old girl’s face.

Little girl, you need to put your bottom in that seat. If you don’t, your mommy is going back to her dorm and you won’t see her today.

The room was silent. Many family members were in shock. But I knew the other women were experiencing, as I was, a seething rage. We knew the officer had the ability to terminate our visits on a whim, so we didn’t dare provoke her. The insidious abuse of power and authority was as it was on any other day, but with our families subjected to it and us unable to intervene, a boiling anger consumed us. But fear overrode anger. Our eyes remained downcast, our mouths shut.

I remember little from the rest of the visit. My parents did their best to distract me from the tension in the room. I couldn’t shake it, though. I went back to the dorm and sat on the floor, trying to make sense of what I was feeling, reflecting on my past seven years in this place. The constant barrage of insults, the belittling, the daily microaggressions from prison staff were suffocating. I thought about how incarcerated men often explain their suffering by revealing the physical scars that incarceration leaves on their bodies. Scar tissue zigzagged across rugged faces and tattooed chests tell stories of survival from gang fights, use of force, and officer retaliation.

But who can see our scars? Life in prison is different for women. The fight for survival tends to be less physical. It’s the psychological abuse we endure, that we don’t know how to articulate, that wounds us. It’s the shaming of Latrice while she stood naked waiting to see her children. It’s the threat of not being able to see family for little or no reason at all. It’s the laughter from officers when a menstruating woman bleeds through her clothes and is still forced to wear them. Every day, all day, invisible wounds to the spirit.

In order to survive, we must endure it. Silently and unemotionally, apologetic and self-depreciating. We must participate in our own degradation by smiling along at jokes made at our expense or apologizing for things we were not responsible for. We betray our true selves to make officers and other prison staff feel comfortable about their cruelty.

I made up my mind that day to attempt to rectify the wrong done to Latrice, myself, and all the women around me. I just didn’t know how.

Almost a year after I was released from prison in 2018, a friend wrote to me from the inside. She told me about a woman who had reached down and plucked a small flower while they were on their way to work one morning. “We marveled at the simple beauty of that flower, when out of nowhere the warden, who just so happened to be walking down the other side of the sidewalk, began screaming at us. He said, ‘You right there, stop! Put your hands behind your back. Do you think this is a park? Do you think you’re at home? I ought to write you up,’” she wrote. “Over a flower. A flower!” She closed her letter,

There is something inside of me that is tired, something that is about to break apart, unhinged and unafraid.

I held her letter in my hands for a long time, staring at the last sentence. I thought about that day in visitation, about Latrice and her daughter and the years of psychological abuse.

At the time, I was on parole and still subject to the whims of authority. Years of incarceration had taught me that breaking the unwritten rule of silence meant punishment. On parole, retaliation wouldn’t be a canceled visit; it could possibly mean my freedom.

But that day, something inside of me finally broke apart. As I clutched that letter, the old rage in my chest turned into a furnace of resolve. It was then I knew how I would try to right those wrongs. I would refuse to remain silent and complacent any longer. I would write the stories of incarcerated women. I would stand in front of legislators and packed hearing rooms. I would bare this scarred soul for all the women who have suffered from the invisible violence of incarceration. The world will know the mark it left on us. We’re not laughing, smiling, or apologizing anymore.

Jennifer Toon is a criminal justice and mental health advocate working at the Coalition of Texans with Disabilities. As a freelance writer, she has published in The Guardian, The Marshall Project, and The Tyler Loop.