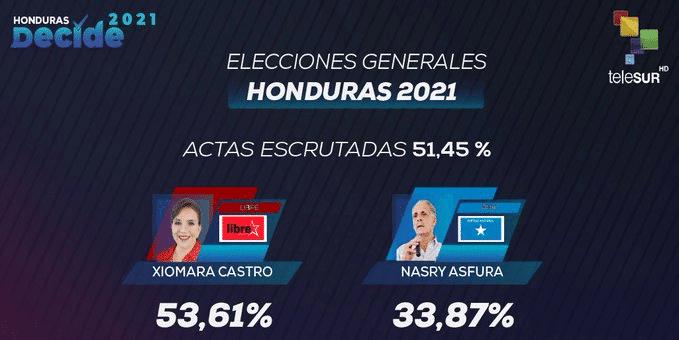 With a significant advantage over the closest contender, Xiomara Castro has emerged as the likely next president of Honduras. With her victory the left will return to power in the Central American nation, 12 years after the U.S.-backed coup against Manuel Zelaya.

Castro, wife of the deposed President Zelaya, has an advantage of more than 20 percentage points, according to the preliminary results published by Honduras’ electoral authority, with over 50% of the votes counted. The socialist candidate registered 53.6% of the votes, or 959,381 votes, while in second place is Nasry Asfura, candidate of the incumbent National party, with 33.9%, or 606,086 votes.

As a result, Xiomara Castro is one step away from becoming the first woman president of Honduras. Castro’s party won on the strength of its opposition to neoliberalism and the free market model, which is strongly entrenched in Honduras—frequently judged to be the poorest nation in the Americas after Haiti.

International media highlighted that the voter turnout was relatively strong. Estimates of almost 70% turnout would place voter participation about 12% higher than that of the 2017 election, in which Castro ran as vice president in an alliance with businessman Salvador Nasralla. Reports indicate the election was peaceful and orderly.

At the close of the election day, the president of the National Electoral Council (CNE) of Honduras reported that the turnout for the elections was historic. “In total 5,182,425 Hondurans cast the vote, which is equivalent to 68.8% of the census of qualified citizens,” stated the CNE.

We turned 12 years of tears and pain into joy. The sacrifice of our martyrs was not in vain. We will initiate an era of prosperity, of solidarity through dialogue with all sectors, without discrimination and without sectarianism.

Castro’s ability to reverse Honduras’ legacy of neoliberalism and free market capitalism will undoubtedly depend on the results of parliamentary elections, also held on Sunday. Preliminary results for Honduras’ next parliament have not been released yet.

During the electoral campaign, Xiomara Castro pledged to fight to restore rights and freedom to the Honduran people, in a country whose right-wing governments opened the doors to drug trafficking and organized crime in the upper echelons of its administration. In addition, many social programs were increasingly privatized, including health and education, prompting widespread protests in 2019.

For that reason, the socialist candidate promised to form a government of justice, peace, and national reconciliation. She confirmed that a primary objective during her administration will be to build a true democratic and participatory system in the Central American nation.

“Never again will power be abused in this country, because from this moment on, the people will be the eternal current in Honduras,” Castro said.

The president of Venezuela, Nicolás Maduro, celebrated the triumph of the Hondurans and congratulated Xiomara Castro on her election as the first woman president of Honduras.

“12 years after the coup against Brother Manuel Zelaya, the people of Morazán resume the path of hope, granting a historic victory to the president-elect, Xiomara Castro,” President Maduro wrote on social media.

La Patria Grande celebrates the triumph of democracy and peace in Honduras. Congratulations!

Under the leadership of Castro’s husband, Manuel Zelaya, Honduras aligned itself closely with Hugo Chávez’s Venezuela, joining the Bolivarian Alliance for the Peoples of Our America-Peoples’ Trade Treaty (ALBA-TCP) in 2008. Honduras was withdrawn from ALBA-TCP after the 2009 coup d’état, in which Zelaya was bundled into a military airplane in the early hours of the morning and exiled to Costa Rica.