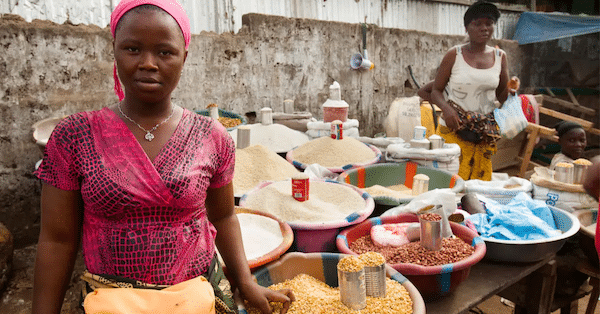 Many women around the world—as with these traders in Liberia—work in the informal economy (Photo: Arc/shutterstock.com)

This is a joint publication by Social Europe and IPS-Journal

Feminist economists have long argued that the purpose of an economy is to support the survival and flourishing of life, in all its forms. This may seem obvious but it turns on its head the prevailing view, which implicitly assumes the opposite causation: the economy runs according to its own laws, which must be respected by mere human actors. In this market-fundamentalist perspective, it is a potential angry god which can deliver prosperity or devastation and must be placated through all sorts of measures—including sacrifices made in its name.

Yet the economy, its markets and its various institutional forms are human creations, which can also be revised and reshaped according to democratic will. That means economic policies can and should be aligned with social and environmental goals.

This used to be seen as a rather wishful, even eccentric, view. But the pandemic and the emergent threats posed by climate change and other ecological destruction have given it more resonance. Even so, the basic idea can seem a bit woolly and unstructured—full of good intent rather than practical strategies for implementation.

Now UN Women has produced a Feminist Plan for Sustainability and Social Justice, which puts much-needed flesh on the bare bones of a feminist approach to the economy, relevant to the contemporary world. It not only rehearses the well-known problems with how economies are functioning but provides clear guidelines for policy, at local, national and international levels. It is based on the goal of ensuring sustainable livelihoods for all, while enabling the equitable flowering of human potential in harmony with nature.

Once it is accepted that economic policies must be put at the service of sustainability, gender equality and social justice, what follows? First, unpaid care work and the environment cannot be treated—as they effectively have been all this time—as limitless resources, which can be used for free and depleted without cost or consequence.

Instead, economic institutions and policies must not only recognise the contributions of care work and nature, but be directed towards socially valuing them and providing the conditions in which they will flourish. A priority of economic policy then becomes creation of decent jobs in strategic green sectors, such as care, agroecology and decentralised renewable energy.

Investing in care is absolutely essential, without treating it as a commodity, personal choice or family obligation. Rather, care work must be seen as a collective good to be adequately resourced and regulated, with expansion of affordable, quality care services which provide decent work to such workers. Social and financial support to unpaid caregivers must also be increased, including through paid family leave and universal child allowances.

The institutions, regulations and policies that provide essential protection for labour, including collective-bargaining rights, living wages, decent working conditions and social protection, have to be strengthened, and the structures and systems made more gender-sensitive and responsive. Workers’ rights in the informal economy are particularly important, as women proliferate as small-scale farmers, domestic workers, home-based industrial outworkers, waste pickers, petty retail traders and food vendors. The expansion of gender-responsive social-protection systems has the macroeconomic advantage of boosting demand, even as it enables greater social resilience against future shocks—including those caused by the escalating environmental crisis.

The global food system is broken—unhealthy, environmentally disastrous and economically unequal. It needs to be rebuilt from the bottom up, so that it supports diverse crop production in sustainable ways for local, national and regional markets, provides food security for all, promotes biodiversity and ensures livelihood security especially for small producers, including women.

We need rapid transitions to sustainable patterns of production and consumption to stave off the looming environmental catastrophe. Decentralised, renewable energy systems are now more feasible and can provide more jobs for women, while providing alternatives to polluting, ecologically-damaging, traditional cooking fuels and reducing the drudgery of unpaid care work.

All this necessarily requires a big public-investment push, to enable economic recovery and lay the basis for structural transformation. That in turn demands a global architecture that allows nations to enlarge their ‘fiscal space’ through progressive macroeconomic policies and multilateral co-operation—especially through tax co-operation which ensures multinational companies and the wealthiest people contribute the most. Public spending in support of care and environmental preservation should be seen as part of global public investment, rather than as ‘aid’ or consumption.

Whenever there is talk of partnerships nowadays, the focus is on ‘public-private partnerships’, whereby governments underwrite the risks and subsidise the costs of corporate investment. But these need to prioritise people and the environment over profits, unlike the experience with Covid-19 vaccines. Also, it is just as important (if not more so) for governments to focus on families, community organisations and small businesses as interlocutors, so that states can promote innovation in all areas relevant to life and nature.

Such enhanced involvement requires states to be more responsible and responsive, along with greater accountability for non-state actors, within and beyond national boundaries. Feminist movements and civil-society organisations are essential to counterbalance both state and market power, providing voice to marginalised and excluded groups—and they need to work in tandem.

UN Women have offered us a clear and persuasive blueprint for what can be done. Now the task is to do it.