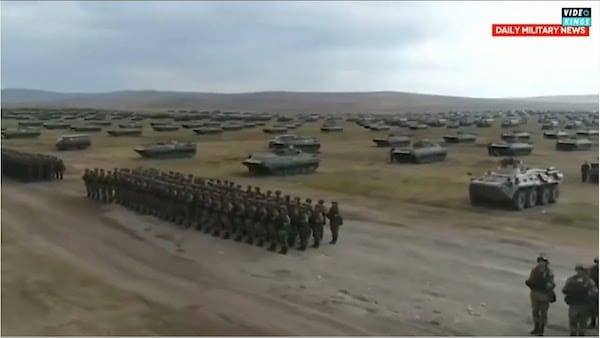 Later today, 5 December 2021, a local radio station in Los Angeles will be airing a half-hour interview I taped on Thursday with Scott Horton, a radio host affiliated with the “dissident” online digest of international news antiwar.com. The topic of our discussion was the ongoing escalation of tensions at the Russia-Ukraine border and whether a Russian invasion in the coming months is likely.

In the interview I elaborated on points made a week earlier in my essay about this same subject on this website and on my LinkedIn accounts, namely that the entire community of commentators on Russia, myself included, had been focusing attention on Russia’s build-up of men and materiel near Ukraine for a war when Vladimir Putin’s actual purpose was not to subjugate Ukraine but  to get the attention of the United States and warn against crossing his country’s ‘red lines’ in Ukraine, red lines that he now defined as introducing attack-capable missile systems in Ukraine.

In an online Q&A with the international business community on November 30 entitled “Russia Calling” the Russian President said such use of Ukrainian territory by American forces would reduce to 5–7 minutes the warning time on incoming missiles to Moscow. He stated that Russia’s response was ready for implementation: to station its new hypersonic missiles on ships just outside the U.S. territorial waters, thereby reducing to the same 5- 7 minutes the time to target in Washington. In short, invasion of Ukraine had no place in his pending strategy.

However, the ball did not stop there. In the last couple of days, President Joe Biden has said the United States does not recognize Russia’s red lines in Ukraine. He said the U.S. is putting in place assistance to Ukraine and taking other measures that would make a Russian invasion very difficult. Meanwhile top Pentagon and State Department officials have been banging the drum once again about alleged Russian war plans in Ukraine, including by release of maps showing the likely routes of ground attack. We are told the Russians have dedicated 250,000 men to this mission.

For their part, the Russian media speak of 150,000 Ukrainian troops that were moved up to the borders of the rebel, Russian backed provinces of Lugansk and Donetsk. This represents one half of the Ukrainian Army.

U.S. diplomacy has been in intense discussions with NATO allies both at a gathering in Riga this past week and more generally to align the response to any “Russian aggression” that may come. Potentially draconian sanctions on Russia have been discussed, we are told. These would likely include a halt on regulatory approval for the Nord Stream II gas pipeline and exclusion of Russia from global bank clearing systems.

Consequently, in light of this new flare-up and ahead of the crisis talks scheduled to take place between Biden and Putin in the coming week, I will try once again to weigh the interests of the parties in this confrontation without going into who acted first and who is reactive.

My position on cause and effect remains resolutely defiant of the Western media consensus about Russia’s culpability. The media differ only in the degree of foolishness by which they explain Russian objectives and thinking processes. Even the most prestigious and seemingly serious Western media like the BBC have been handing the microphone to utter nitwits whose only merit for their purposes is hatred and disdain for Russia. On this morning’s BBC news broadcast, several minutes of air time were given to a dunce who rattled on about how Russia’s coming invasion was intended to distract attention from domestic woes such as the faltering economy and the poorly managed fight against the Covid pandemic.

I ask instead what does Washington hope to achieve by pouring kerosene on the flames of the Russian-Ukrainian confrontation.

First, to the extent that Washington can keep the “guard rails” in place and not touch off an all-out war with Russia, it seeks to do precisely what that gal on the BBC was attributing to Mr. Putin: to create a diversion from its own political travails at home. Going back 70 years to the start of the first Cold War, domestic U.S. politics have always been a major factor in the ratcheting up or down of the conflict with Russia over global “leadership.”

At this moment, though Biden has won a partial victory on his domestic infrastructure legislation, he is widely seen in the U.S. establishment as a weak president in defending U.S. interests abroad because of the catastrophic withdrawal from Afghanistan. Political pundits see a likely loss of Democratic control in the House and Senate in the mid-term elections that are less than a year away. And if muscle-flexing on the world stage might help the image of the man and his Administration, how much safer it is to do that precisely with Russia, which has a long record of cautious, reactive behavior when under threat rather than to try new provocations against Beijing, who otherwise are Washington’s number one adversary today. The Chinese, under President Xi, are both very assertive and unpredictable. As we approach the anniversary of “Pearl Harbor” there is no doubt the U.S. is more wary of China’s readiness to defend its neighborhood proactively than it is of Russia doing the same.

As seen from Washington, its present encouragement to the Ukrainians to be irresponsible and try to reassert control over their rebel provinces by military force , its threats to Russia to keep its forces out of the way, all appear to be a ‘heads I win, tails you lose’ bet. If the Ukrainians should, against all expectations, resist any Russian onslaught thanks to NATO training and war materiel, and retake the Donbas, then Moscow has a bloody nose and becomes a less serious threat to American interests globally. If Kiev is smashed, then so what: the U.S. still wins, because the European allies will be compelled to go along with imposition of draconian sanctions on the “aggressor” that do great damage to the Russian economy, to its military capability, and to its global standing. And Biden will have won laurels that serve him well next November. Republicans who are clamoring for his scalp today will just have to shut up.

Of course, all of these calculations on the American side are reckless. The Russians have plainly said that they deem the Ukrainian government to be U.S-controlled, not a free agent, and they hold Washington directly responsible for whatever may happen on the ground in their neighborhood. So the threat of a regional war remaining localized and not escalating to exchange of blows between the Great Powers is unclear. Moreover, there is the question of how the Chinese may use the pending conflagration over Ukraine to their own advantage in settling their contest with the U.S. over Taiwan and control of the South China Sea.

As I have been saying for some time, the near term fate of humanity rests not in combating Global Warming but in resolving the threats to global peace emanating from Washington as it tries by hook or by crook to maintain the worldwide hegemony that is fast slipping through its fingers.